Exeter City will be looking to bounce back from defeat when they travel to Cheltenham Town in Sky Bet League Two.

City fell to a 4-1 loss at home to Mansfield Town last time out, but manager Matt Taylor says his side are determined to put things right.

The City boss said: “The lads are hungry to get back on the pitch and show that they’re better players than they showed last weekend. The lads didn’t need picking up on Monday morning, they came in with the right attitude which is what you want as a manager.

“They want to put it right, they know they weren’t good enough last weekend, and we’re bitterly disappointed with the result, but hopefully it was just a blip after two good performances. We’re looking forward to the game this weekend.”

The side last met back in September when the Grecians recorded a 3-1 win at St James Park as they came from behind with goals from Pierce Sweeney, Jayden Stockley and Jonathan Forte- who netted the 1000th Exeter City league goal under Trust ownership. 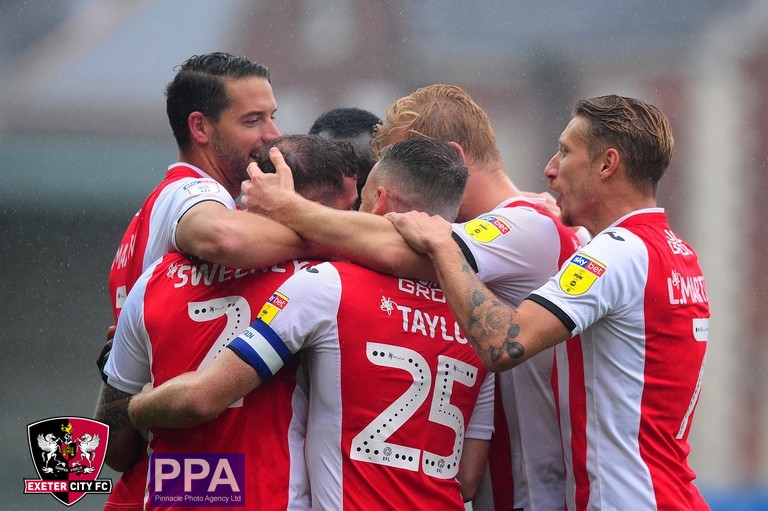 Grecian Travel for the match has been taken off sale online. However, if you contact the club shop in person or by telephone you are still able to book your place.

For more information or to book please contact Chris Woolcott on 01392 250250. Alternatively, drop into reception at St James Park.

One of City’s shorter away matches of the season, from Exeter you need to travel up the M5 past Bristol and into Gloucestershire. Take the exit for the A40 at Cheltenham before following that road into the city. The A40 will bring you to a roundabout in Cheltenham where you need to go straight over following the A4015. This leads you onto a left turn when you need to join the A46. Follow this round for a short period before turning right onto Clarence Road where you will then join the B4632 which takes you up towards the stadium which will be on your right. According to Cheltenham’s official website, car parking is limited at the Jonny-Rocks Stadium, but you can pre-book a car park space on a match day by contacting the ticket office on 01242 573558 (selecting option 1). Match day parking does cost £5 per vehicle. Street parking in the immediate vicinity is also restricted. There is also another car park which is located at the back of the Colin Farmer Stand. This car park it located in the Parklands Community Centre and is also available on a first come, first served basis on a matchday.

There are direct trains to Cheltenham from Exeter St David’s station, and they are reasonably frequent on the day of the match. The 10:24 train will get you into Cheltenham Spa station for 12:09, otherwise the 10:49 will get you there for 12:39. The 11:23 will also get you there in good time for 13:09. On your return to Exeter you can catch the 17:25 train which gets you back for 19:35 following one change at Bristol Temple Meads. Otherwise you can catch a direct train from Cheltenham Spa at 17:52 which gets you back for 19:44.

According to footballtripper.com the stadium is located just 15 minutes away from the town centre and there are numerous pubs en-route. The website recommends: The Sudley Arms, The Feathered Fish and The Kemble Brewery. Alongside the expected fast food outlets within the town centre there are also two fish and chip ship shops near the stadium with one on Whaddon Road itself, just 150 yards past the stadium, and the other next to the Sudley Arms pub on Prestbury Road.