If you're making the trip to the Jonny-Rocks stadium at the weekend to cheer on the Grecians against Cheltenham Town, you may well see a group of fellow City fans wearing fezzes.

This is down to a fantastic group of people that will be raising money for CLIC Sargent, a charity that supports young people who are battling with cancer.

Since the Fez Army started back in 2014, the group have managed to raise almost £200,000 for FORCE Cancer charity, and now they’re aiming to help youngsters cope as they undergo treatment.

Martin Lynn, who founded the group and is currently suffering from post-transplant problems, underlined the importance of the fundraising.

He explained: “A lot of the children from Exeter are treated in Bristol and they’ve got homes from home where families can go and stay near their children whilst they have treatment. For a family of six you can get a great big family room for £33 per night so that’s something we want to work on. We know if we make £330, we can put a family there for 10 nights that can go and visit their child who is having cancer treatment.” 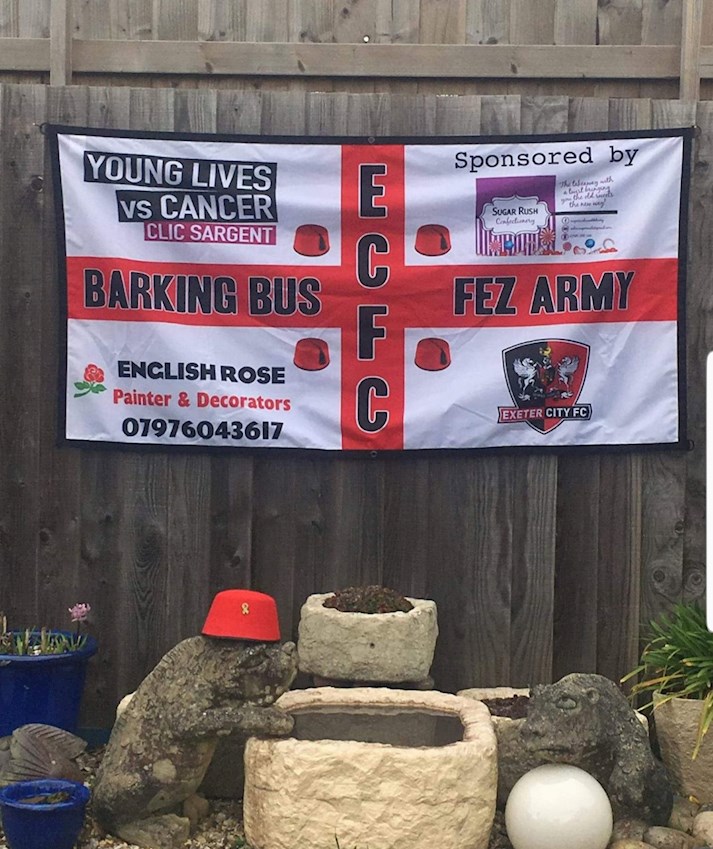 At a time when one is struggling with the treatment, having family close by can make all the difference, something Martin knows only too well.

He continued: “My transplant was in Hammersmith and I was in an isolated unit, but I had a flat in the campus for my loved ones to stay in when they came to see me over five weeks and it was amazing. The treatment is hard work, and with the poor kids going through it, they need their mums and dads with them.”

Having had treatment, it has left Martin unable to attend games due to mobility issues. But despite not being at Cheltenham in body, Martin believes the group, organised by friends Steve Vooght and Terry Gale, will do him proud as they aim to raise as much as possible for the fantastic charity.

Martin said: “The lads call themselves the ‘Barking Bus’ they’re brilliant, all mad as hatters, they all wear Fezzes, I estimate they’re going to make £2,000 through the online page that’s already set up. We’ve got charity wristbands and key fobs and they’ll sell everything to everyone.”

Martin grew up attending City games sporadically but can recall matches with Newcastle United and Norwich City over the years and says he’s pleased to see his son now following the Grecians week in, week out.

“If I’m being perfectly honest, I’ve gone to watch games on and off,” said Martin. “I went to the famous games against Newcastle United in the cup and I flew to Norwich to watch the team. I’m left disabled from the cancer treatment and it’s taken my mobility away.

“I used to love watching Darran Rowbotham and Steve Neville at City and I’m chuffed that my lad is a season ticket holder because I’ve told him that the Premier League is a circus and the grounds are a bit like tourist attractions now. I loved watching the clips on Facebook of the City fans at Notts County singing their hearts out.”

It would be fantastic to see as many City fans get behind and support the Fez Army as possible when the Grecians travel to Cheltenham, so if you see the fund raisers, be sure to donate to a fantastic cause and help some brilliant people change lives.