Exeter City Ladies' player-manager Abbie Britton says the lessons her young side learned from defeats early in the season was one of the main reasons behind their title success in the South West Women’s Football League Premier Division.

City achieved promotion with a home win over Keynsham Town Development on Sunday thanks to two goals from leading scorer Sophie Gillies and one from Dani Skinner.

However, despite 16 wins from 18 games and over 100 goals scored, it has not been all plain sailing for the Grecians as defeats to Callington Town, in late September, and Keynsham Town Development, in mid-November, had put their aims of promotion in jeopardy as the campaign reached the halfway stage. Since then though, the ladies have won 12 league games on the spin.

“It is an amazing achievement for us as a football club, amazing for the girls because we have got such a young squad and hopefully, it will the first of many good experiences they can have throughout their careers,” said player-manager Abbie who shares her coaching role with joint-manager Clive Watts.

“We had some defeats early on in the season but those loses really taught us a lot about ourselves and as a collective we regrouped and we knew what we needed to work on and we knuckled down and thankfully got that promotion.”

It means City will move up to the FA Women’s National League Division One South West where they will play the likes of Buckland Athletic, Southampton Women and Cheltenham Town.

“It has not quite sunk in, to be honest with you,” admitted Abbie, whose side have celebrations planned this week before completing their final match of the campaign away at Ilminster.

“Yesterday we had the celebratory party in the changing room, which was great but it is one of our girls’ birthdays later on this week so we are going to go out and enjoy ourselves then. 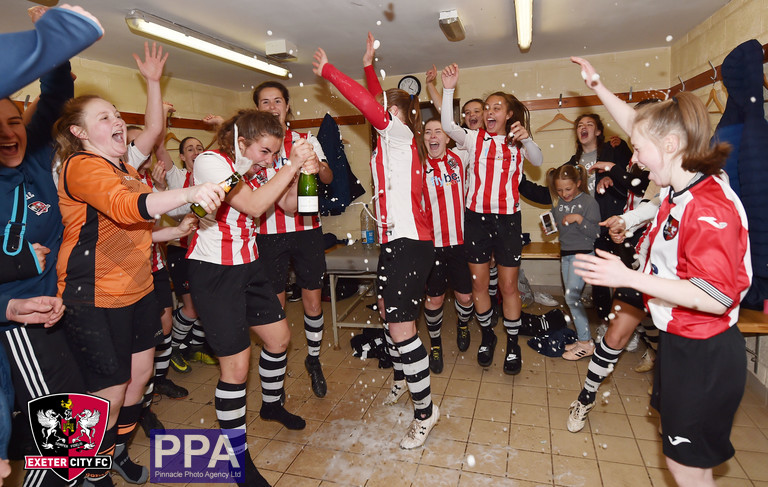 “We still have a game on Sunday to wrap up the season against Ilminster and receive the trophy so we will make sure we prepare for that just as well as we have for the rest of the game this season though.”

Speaking about stepping up to a higher league and the challenges that will pose, Abbie added: “It is a big step up for these young girls but I am confident that we will be okay. We played Buckland here at SJP and we did well against them and we played Cheltenham in the FA Cup and took them all the way.

“So yes, we are confident we can compete and our aim next season would probably to say safe, maybe mid-table something like that, and then build upon that the year after.

“Myself and Clive (Watts) have already had a conversation about what we would be looking for (in terms of new players) and we need some experience to help those young girls, players who have been there and done it. Exeter City is certainly the club to be at. The ladies are moving in the right direction, on and off the pitch, and I think that will help us attract that quality that we need.”