Exeter City picked up a point at Stevenage last time out at the Lamex Stadium, keeping in seventh place – the position they have occupied for much of the season.

They now host Oldham Athletic in their penultimate game of the season, with the visitors forming a late promotion assault after winning 14 points from their last six games.

The Grecians go into their final game at St James Park this season, knowing victory against Oldham would greatly boost their hopes of landing the final play-off berth.

Here’s everything you need to know about Saturday’s opposition…

Originally formed as Pine Villa in 1895, the club swiftly changed name to Oldham Athletic in 1899. They soon went on to enjoy some relative success in their former years by gaining promotion to the First Division in 1910 and finishing runners-up in the First Division just five years later.

Oldham would maintain their top-flight status until 1923, but would not regain it again until 1991/92. Despite the Latics’ promising early years, a trophy still alluded them and this finally arrived in 1953 after winning the Third Division with the same trophy achieved some 20 years later in 1974.

The Latics’ golden years came during the early 1990s as they won the Second Division in 1991 and became a founder member of the Premier League, where they spent three years upon promotion to the top-flight. Along with the two remarkable FA Cup runs, the club also lost the 1990 League Cup final.

A man who has been a part of the furniture at Oldham for ten years, Pete Wild has finally been given a crack at taking permanent charge of the club following Paul Scholes’ leaving the club after a month. 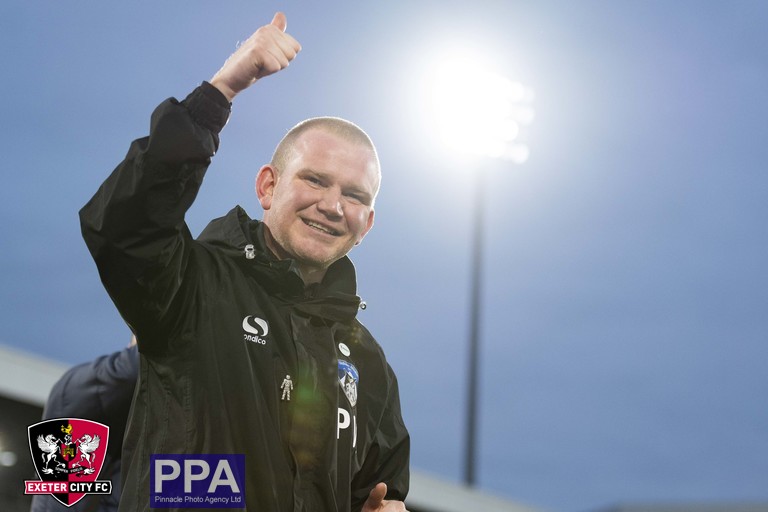 Wild had previously acted as an interim manager after Frankie Burn was sacked just before the turn of the year, as Wild went on to mastermind the FA Cup third round defeat of Premier League side Fulham in early January.

Previously an academy manager at the club, Wild led the team admirably in that brief stint and after Scholes took the job and subsequently lost it, the new boss has led the Latics to 14 points from 18 and an unlikely, late promotion push.

The record being set in an FA Cup tie against Sheffield Wednesday in 1930 when 47,671 people packed in for the big occasion. The highest league attendance also came in the same season, as 45,304 people witnessed Oldham host Blackpool Town.

At 37, veteran defender Peter Clarke may have customarily generally received all the plaudits, but it is his 21-year-old centre back partner George Edmundson that has really rose to prominence this season, as the Latics’ standout player.

A free-scoring Oldham side have proven equally adept at the back, with the sternest defence outside of the top-seven sides – minus Bury – and Edmundson has been an integral part of that.

The defender proved his worth in the second half of last season, after impressive loan spells at non-league Ramsbottom United, Alfreton Town and AFC Flyde, but has proven well capable in stepping up another level this year.

The task facing Exeter could not be any clearer, as they face the league’s most in-form team of the past six games and since the beginning of April.

The Latics’ upturn in form coincided with the Paul Scholes’ sacking after his disastrous month in charge and since then the club have gained 14 points from 18, as they remain unbeaten under Scholes’ successor, Wild.

Three consecutive 2-0 wins against Grimsby Town, Tranmere Town and Colchester United got Wild’s reign off to the perfect start, before back-to-back draws with Swindon Town and Cheltenham Town.

The Latics returned to winning ways and demonstrated their own play-off credentials following a hard-fought 3-2 win against promotion-chasers Mansfield Town. With three games left and one-in-hand over their rivals, Oldham know they could potentially hold their own play-off destiny by beating Exeter on Saturday.

A dreadful start to the campaign meant Oldham had lost all five of their opening games and sat 23rd in the table. A 5-1 humiliation at the hands of Rotherham United compounded matters further as the Latics dropped to the foot of the table.

The next couple of months were more promising though, as Oldham lost just one game up until December and consequently propped up to 17thplace. They then dismantled a Northampton Town side 5-1 to record their best victory of the season.

A dismal run of six defeats and three defeats followed from their next nine games, as the Latics became fully immersed in the relegation battle once more. The club perked up in February, but were ultimately undone by a winless run of eight games until the end of the season, as slipped down to League Two by just the solitary point.

The Latics had taken an early lead through Sam Surridge, before Stockley drew the sides level just before the interval. Callum Lang instantly restored Oldham’s lead, before Stockley’s goalscoring heroics gave his side all three points in boosting their promotion prospects.

Tickets are on sale at advance prices until 5pm in person and midnight online, on Friday, April 26.