The Exeter City Supporters’ Trust have today launched a campaign that aims to support the future stars of Exeter City Football Club, and help the academy reach even greater heights.

The academy has worked tirelessly in getting the very best out of City’s young footballers, helping to produce talent for the first team, many of whom go on to even bigger things and, at the same time, providing important income for our club.

That is added to the likes of George Friend, Ollie Watkins, Ethan Ampadu, Jordan Storey, Matt Grimes, Tom Nichols, Liam Sercombe, Scot Bennett, Jordan Moore-Taylor, Christy Pym, Mark Ellis and Sean Goss, who have learned their trade in the Exeter City Academy and are now representing clubs in the English Football League and, in Ethan’s case, the Premier League and Bundesliga.

Watch and find out about the Academy!

Julian Tagg, Exeter City chairman, has long been a staunch supporter of the academy and is passionate about its place within our club, he said: “Not only does the Academy benefit our Trust model but, I believe, it’s unrivalled success means that it is viewed with great pride by all who love Exeter City."

Speaking about the importance of putting the academy at the forefront of what the club does, Julian added: “It is a good job that we have that attitude and that approach towards the academy, because it is a community-owned club, which means the feel here is very different to perhaps many other clubs, and also were are, to a degree, significantly dependent on the academy.

"So not only do we want to, we must develop those players. We want to see them on the first team pitch and therefore a lot more of them get on the pitch a lot earlier than somewhere else, so it is a great place to be from that point of view. Then if they go onto greater things then the finance comes into the club which is all the better.

Academy manager Arran Pugh highlighted how important the role of the club has been to the Academy’s success. He said: “The amount of opportunity the club provides for players to get into the first team when they are ready and good enough, allows us to be so successful in terms of player development.

"Above and beyond that is the core values we have, ensuring the players develop away from the field as well-rounded young men is key for us." 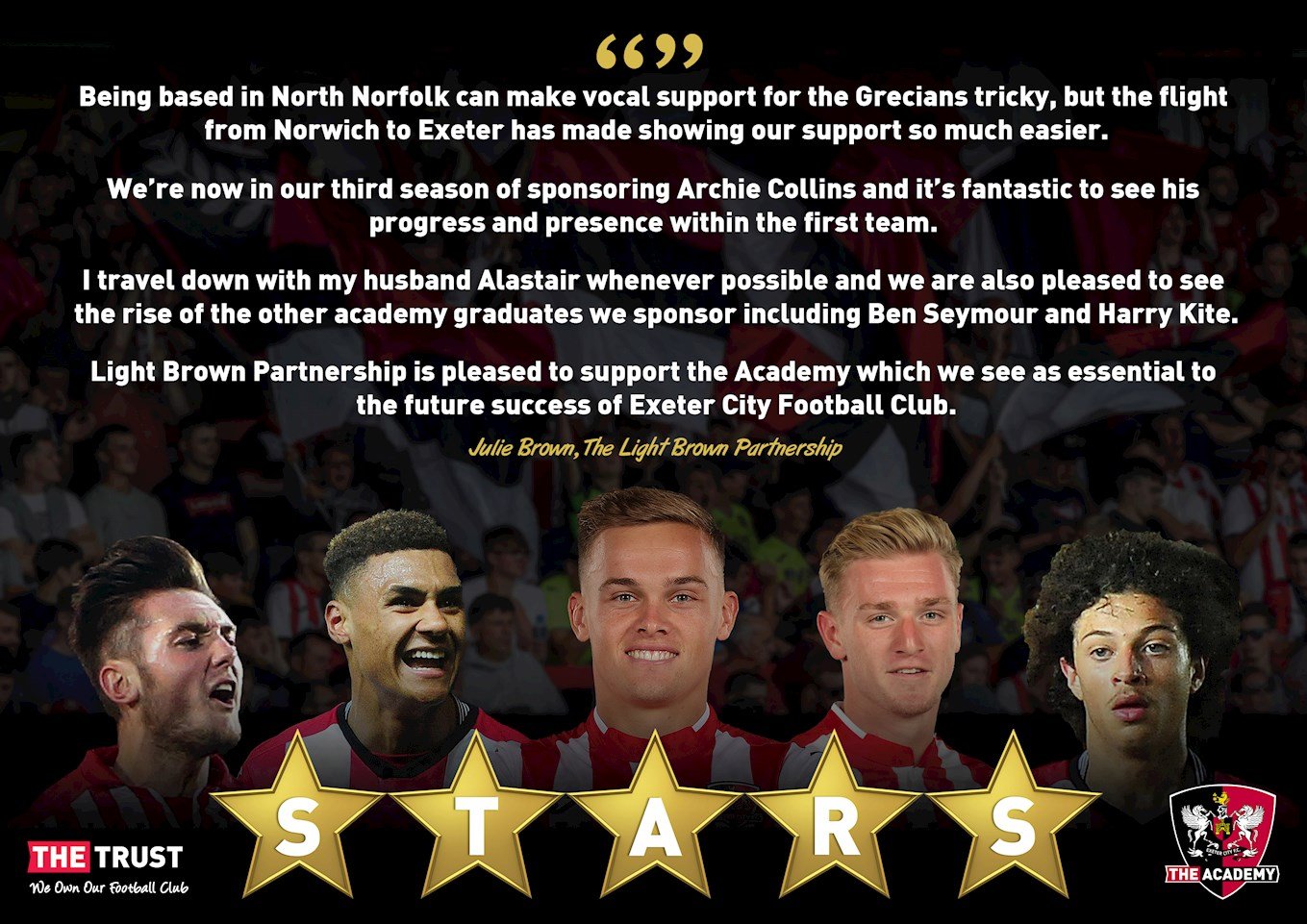 Dean Moxey joined Exeter City as 11 years old. He would make his first team breakthrough in 2003 where he quickly established himself as a first team player, before earning a move to Championship side Derby County in 2009. Dean has gone on to play at the highest level with Crystal Palace in 2013.;

"Speaking about the impact of the academy, Dean said: “The managers that we have had have given youth a chance, so it’s something for a young boy to look up to and know you’ll get a chance if you are good enough. It’s a great club to be at coming through and the opportunities they give you."

Supporters’ Trust chairman Nick Hawker urges fans and sponsors to get involved with STARS, he said: “The Supporters' Trust has always been a great and encouraging advocate of the Academy. For the 2019/20 season we would like to take a step further and support all of the Academy rising stars, launching a yearlong fundraising campaign to sponsor the efforts being made to ensure the future Exeter City teams are brimming with young talent.

"Please help us achieve this - we own our football club, and, like all good football club owners, we should provide support for all our budding stars!"

How you can get involved

You can support the STARS campaign in a variety of ways:

For entry into monthly draws to win match tickets or hospitality tell us when you have donated by visiting: weownexetercityfc.co.uk/academy-donation.