Exeter City’s Aaron Martin was delighted to score in front of the Thatchers’ Big Bank with a vital goal as the Grecians came from behind to beat Northampton Town 3-2 at St James Park.

The centre-back scored City’s second of the game to give us a 2-1 lead at the time, just a minute before Alex Fisher scored a decisive third. Sam Hoskins pulled one back for the Cobblers, but City held on for three huge points.

“It was a tough game. We knew exactly what to expect from them, they’re very direct and we just had to deal with it. We grew into the game as well; second-half I think we were a lot better, we dealt with pretty much everything they threw at us and it was a good performance all round really.

“I’m really happy with the goal. It’s been coming as well – I’ve been trying to work on it, it was a great ball in from Randell. The deliveries have been brilliant this whole season so it’s up to us to get on the end of it and if it isn’t me, it’s one of the other boys.”

It was an engrossing game where momentum swung both ways, and though City fell behind after 31 minutes to a Charlie Goode half-volley, Randell Williams had us on level terms before half-time with a fiercely-struck effort from the edge of the box.

“It was massive for us to equalise quickly, and I’m delighted for Randell as well – he’s been doing that a lot lately and not getting the justice for it, so I was really pleased for him to see it go in but it was also a massive goal for us to get us back in the game. It helped build us up from there, and we knew that we needed to step it up again and push on to try and get the win.

“Scoring twice so quickly was massive – we’re really disappointed that they got one back, but to get two on the bounce gave us more control of the game. It was so important.”

Finally, Aaron added his thoughts on the outcome of the game: “It’s a massive result, it puts us up to the second so we’re in a good position, there’s still a really long way to go yet but if we can keep building on our performances and keep being resilient then hopefully we can still be up there near the end!” 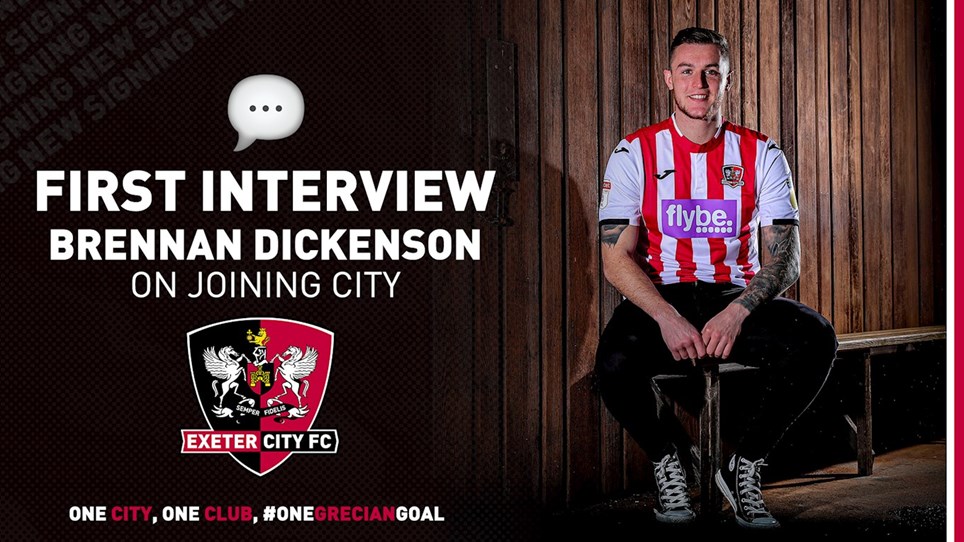 💬 Brennan Dickenson: "The boys have put themselves in a great position and hopefully I can come in and help."


Brennan Dickenson says he is excited by the prospect of coming into a promotion battle Exeter City. 💬 Ryan Bowman: “It’s vital to pick up points against those teams around you.”


Ryan Bowman says the Exeter City players are raring to return back to league action when they host Northampton Town this weekend.