City face a Colchester side who are on a run of eight matches unbeaten and who sit in fourth place in the table.

Captain Jake Taylor says he and the Exeter City players will be looking to build on a good festive points tally so far when they travel to Colchester United on Sunday.

He said: "It is important to be professional over the next few days and go to Colchester with real confidence and take the game to them like we have done in recent matches."

Tickets can now be purchased on the day, with cash and card sales available.

Matchday prices are as follows:

Unable to make it to the Colchester Community Stadium on Tuesday night as City take on Colchester United? Don't worry! We've got you covered! 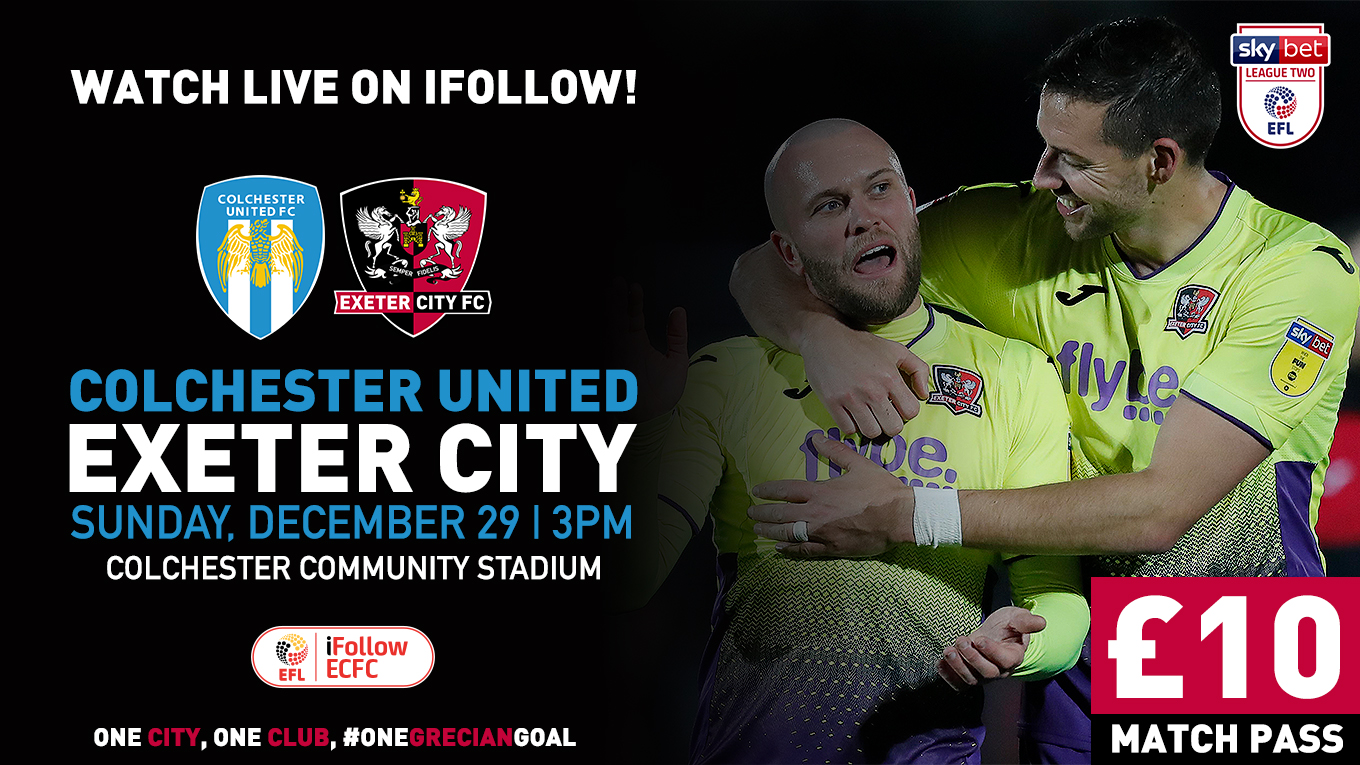 City come into the match in fine form, with just one defeat in their last twelve matches in all competiitons and sit second in the League, three points behind leaders Swindon Town.

Colchester are in fine form too and are on a run of eight games unbeaten and sit in fourth just six points behind City, with a game in hand.

The U's extended their unbeaten run to eight games with a 3-1 win away at Leyton Orient on Boxing Day. Two goals from Theo Robinson, and one from Harry Pell sealed the win, with Ruel Sotiriou netting for Orient.

As usual, we’ll have the match covered across our social media channels and we’ll have a post-match interview.

with manager Matt Taylor as he reflects on the result. You can also tune into BBC Radio Devon to listen to commentary as well.

Known as the Jobserve Community Stadium for sponsorship reasons, it opened in August 2008, at a cost of £14m, and has a capacity of 10,105.

The JobServe Community Stadium is a cashless venue, a move which was made to help improve queue times and increase convenience for visitors to the stadium.

To get to The Jobserve Community Stadium from Exeter, the quickest way would be to take the M5, M4 and M25, to get to junction 28 to turn off on the A12 towards Chelmsford. Follow the A12 to junction 28 as well, turn left at the first roundabout. Then turn right into United Way from the second roundabout where you'll arrive at the stadium.

The postcode of the stadium is CO4 5UP, but you may find that your sat nav system does not acknowledge this postcode if it was bought before 2008. It is recommended to use CO4 5JS, which is the nearby Rapid Electronics factory.

You can take the 8.34am train from Exeter St Davids which will arrive at Colchester at 2.09pm. However, there are three chances at London Paddington, Newbury Park (via the tube) and Ingatesstone to use this service. Colchester's stadium is a 40 minute walk from the train station though so it would be advisable to catch a taxi once you arrrive into the town to get you there in time for kick-off.

Colchester allows access to the bar and toilets located on the concourse area of one of the stands, before each home game (12.15pm for a 3.00pm kick-off). Drinks can be taken back outside the stadium to enjoy the pre-match entertainment such as live bands which are often playing under the marquee. This bar is available to both home and away supporters. Alcohol available includes; Lager, Bitter, Wine, plus Whisky and Brandy (all at £3.80).

With the stadium being on the very outskirts of Colchester, then there is little in the choice of pubs.