After reaching the midway point of the 2018/2019 season, with the Youth Alliance South West fixtures being completed, Exeter City under-18s coach Chad Gribble, reflects on what has been a real positive six months for the young Grecians.

Exeter’s youths finished a very credible third in the overall league standings and won the Youth Alliance Cup Southern Section, two feats that many did not predict before the start of the season.

“We had no real team goals but our ambitions were to finish as high up the table as we could and to try to improve ourselves on a daily basis,” said Chad.

However, some eye-catching performances, and impressive winning streaks led to the Devon club rising up the table, as well as progressing into further rounds of the cup, setting themselves up for another big six months in the second half of the campaign.

It was back in August when Chad started his new role as under-18s coach, stepping up from a similar job in the under-16s set-up. The Devon club hoped, despite having a relatively young squad for the season, they were able to compete with some more experienced opponents.

City began the season well, with wins over Plymouth Argyle and AFC Bournemouth coming in their opening three matches but three straight defeats afterwards saw the youngsters go through their toughest time of the year.

Chad said: “The three consecutive losses were a big learning curve for us, and it showed us where we were falling short. Given the size of the squad, we needed everyone who played to step up. 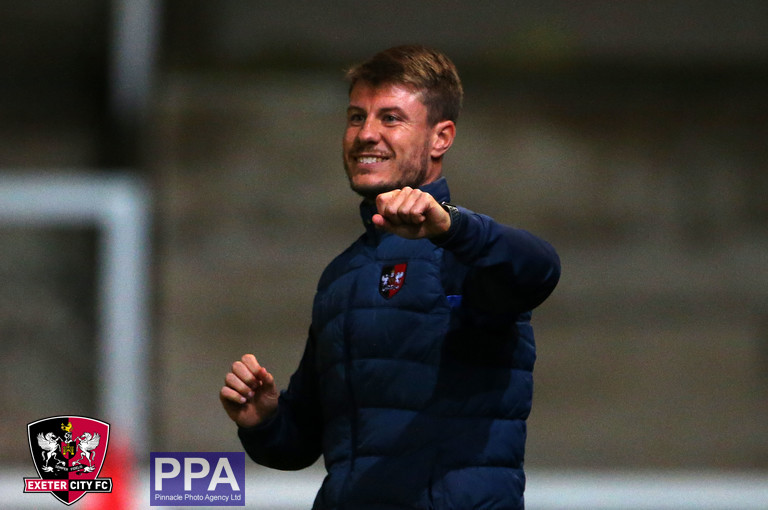 “Thankfully the players responded, with the second years becoming real leaders of the group. Will Dean, Jordan Dyer and James Dodd all played their part, whilst the first years also had to up their game. Normally they get a bedding in period which allows them to adapt to under-18s football, however that wasn’t the case here.

"The under-16s had to step up and show some maturity, which they did. The lack of maturity which we had wasn’t an excuse for those defeats, but showed us where we needed to be.”

His side responded with a 2-1 league win over Forest Green Rovers, but Chad highlights the following Youth Alliance Cup match, a 2-0 victory over Swindon Town, as the defining moment of the season.

“That was a big turning point,” he said. “They were a fairly strong side and we had just lost to them in the league, but the cup tie had everything. It was the first time we showed maturity in our play, and we limited the chances we gave them. The win kick-started a decent run of results for us after.”

Despite suffering a league defeat afterwards, a five-match unbeaten streak followed, which included a Youth Alliance Cup win over Bristol Rovers, another match Chad singled out in his round-up.

“We beat Bristol Rovers in our next cup match, another instance when we had lost to them before in the league,” he said. “During that match, we proved something to ourselves. We had a very young team out, but we displayed the right mindset and showed all the ‘must-haves’ in our game.” 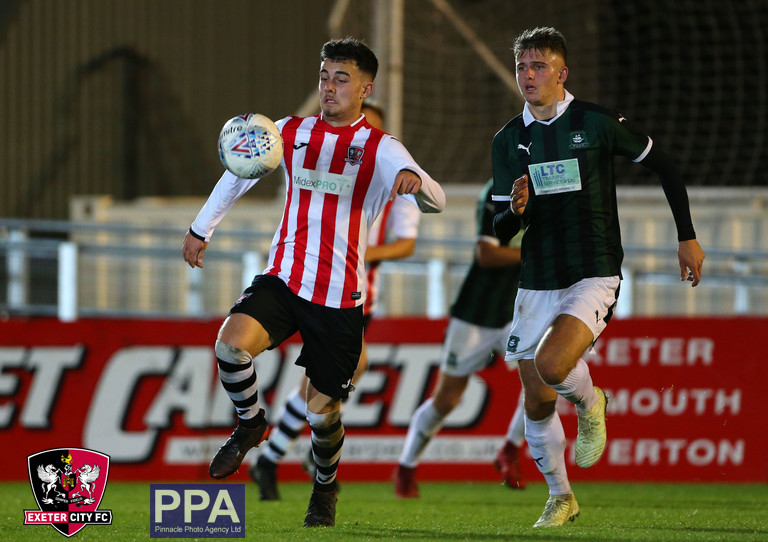 It was in the Youth Alliance Cup where the Grecians certainly made progress, beating their two Westcountry rivals before defeating South East league leaders, Northampton Town, in the semi-final to progress into the final two. A tough encounter with Southend United followed, but goals from Theo Simpson and James Dodd meant the youngsters triumphed over the Shrimpers.

“The cup competitions are great,” said Chad. “The further you progress, the more important the game can be and because they can provide new experiences, we are always desperate to do well in them.

“Playing in the final added that bit of pressure and stress for the players, but they know how to deal with situations like that. The cup ties tend to be different occasions, but they are one-off matches which the boys like to play in.”

Back in the league, despite suffering two more defeats, five wins in their final six games, including an almost-complete performance against AFC Bournemouth saw Exeter climb to third ending with a haul of 34 points. Merit League One qualification was ensured, and with the team playing arguably their best, it meant the group could go into the Merit League brimming with confidence following their achieved exploits already this season. 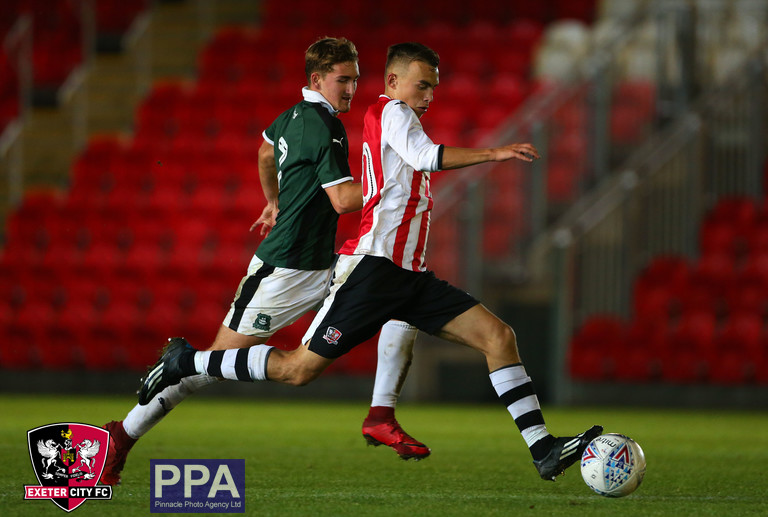 “The team cohesion has been a massive factor towards our success, and every group of players have stepped up to levels beyond their years,” he said.

“We’ve taken some players from clubs, such as Jack Stafford and Cheick Diabate, and credit has to go to them for settling quickly.

“The under-16s have not only surprised myself, but themselves also. I know how big the step up is from under-16s’ football having coached the under-16s for a number of years, but all the players that have been called up have stepped up and grown up, helping the whole squad achieve success.”

On many occasions this season, the squad have been commended for their character and determination; much-needed qualities when bouncing back from setbacks and testing circumstances.

“They are important characteristics to have,” said Chad. “It is common knowledge that in your career as a footballer you will at some point lose games. The real test is getting back in on Monday morning and wanting to work hard to put things right.”

Ahead for Chad and his youngsters, because of their top-half finish, they will be entered into Merit League One with the best of the South East region, as well as the other top half sides from the South West. A number of sides will provide different tests to what the youngsters may be used to but every challenge will help the development of each player.

“We have some new tests on many different fronts in Merit League One,” said Chad.

“Some teams will field really young sides as a lot of clubs will have offered their scholars their youth contacts, and they’ll be preparing for next season. Other sides will play with their current roster of players, which will provide some physical tests and will put us against some experienced individuals.

“We will be playing sides we don’t play often, but the occasion, combined with the travel and overnight stays will make things more realistic to professional football for our players. We certainly like the league, and generally our players deal well with what the Merit League throws at us” 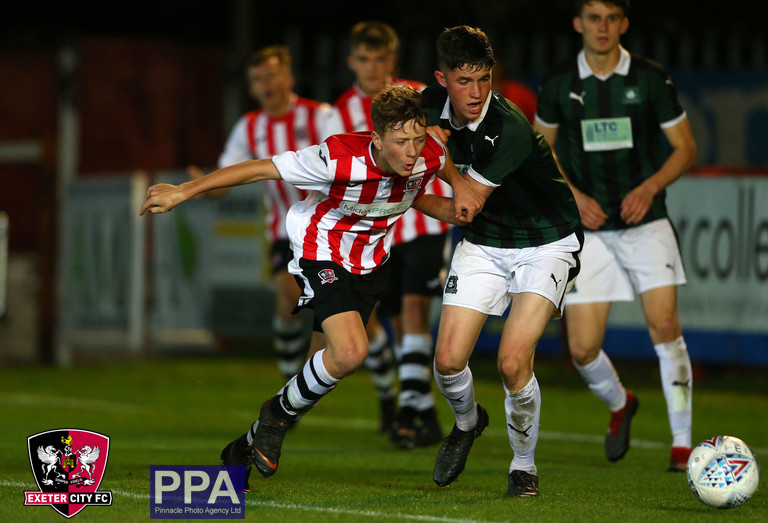 However, just like many of the Merit League teams, Chad and the rest of the academy will also doing their best to add to the experience of the younger players, and to prepare for the 2019/2020 season.

“We have already offered scholarships to a number of our under-16s for next year, and in the second half of this season, we begin to see them as under-18s. We will try and get them in to train with us as often as we can, as well as involving them on match days. If we finish high in the league, great, but the second half of the season is more about providing opportunities.

“The previous manager showed how much he gave youth a chance in the first team, and the current manager is exactly the same. We want to work like that in the academy, and want to give the young guys a chance to flourish in a competitive environment - we believe fast-tracking the players will only aid their development in the long-term.”

The Exeter City Academy have had a long habit of developing players that have become success stories in the professional game. With the Devon club’s under-18s, and the younger age groups all achieving their own accolades, with the hope the future can provide even more highlights, maybe the next success story is being moulded in the academy as we speak.