Rewind back to October 28, 2017. The Grecians are away at Mansfield Town, one of the more difficult away trips in League Two, but an 86th minute Lee Holmes strike is enough to give City a well-earned point for a 1-1 draw.

That day was also the league debut for Kane Wilson who had joined on loan from West Bromwich Albion. Despite picking up a positive result, the day was perhaps somewhat tinged with frustration as Kane had picked up the first red card of his career for two bookable offences.

Following that disappointment, he would then go on to register a further 21 appearances for the club. He would feature sporadically for the Grecians as they chased promotion, and he would score his first goal on a freezing cold day at the end of December against Barnet.

Throughout the season he continued to learn through game time, as well as from another red card, but it was clear to see that the Grecians had temporarily brought in a player with natural ability and a willingness to develop.

His enthusiastic persona made him an instant hit with the City faithful therefore it was no surprise to see them welcome him back with open arms when Matt Taylor acted to acquire the 18-year-old until the end of the season from the Baggies, following a loan stint which was cut short at Walsall. 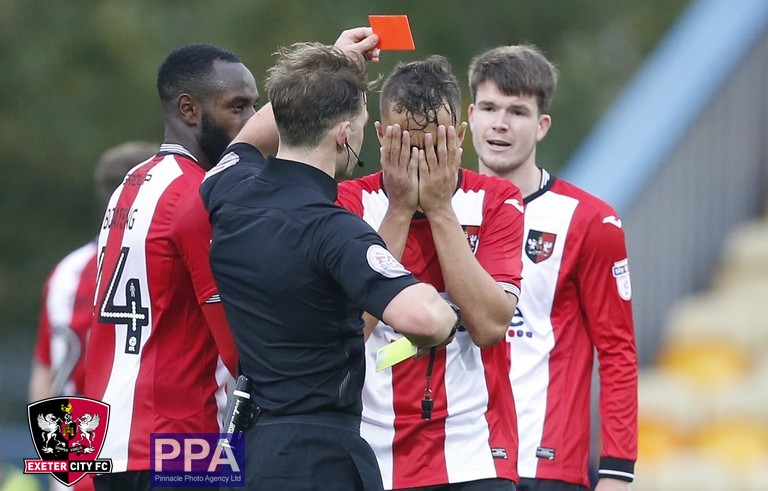 “Hopefully Exeter will see a different type of Kane, obviously everyone knows I’ve always been quick and strong, but I feel like now my game on the ball and defensively has improved loads. Hopefully the fans will enjoy it and I can help the team going forward.

“I learned a lot from them (red cards.) I’ve been on a yellow a few times now and it’s been at the back of my head that I can’t get three red cards. It’s something I’ve learned from, sometimes football is football and you can only do so much. If you’re unfortunate, then you’re unfortunate but I try my hardest to stay in the good books of the referee now.”

When Kane discusses his first stint at City, he struggles to hide how much he enjoyed being in and around a first team environment and playing in games where three points were crucial.

It’s clear he is also happy to return, no less because he is at a place where he knows he can develop and learn and a place where the coaches have an interest and determination to help him in his career.

Kane explained: “Coming back was always a positive because I knew everyone, and I knew it would be easy to settle back in after having such a good time before. It’s always positive here, I love the fans and they seem to like me.

“I was looking at one or two other clubs to go on loan to and then Matt (Taylor) called me when I’d finished training at West Brom. Having experienced last season and being unfortunate not to go up, Matt said we were looking to go up this time and he sounded so positive. The way he spoke to me on the phone made it an easy decision to come back.”

‘Once a Grecian always a Grecian!’ reads the tweet from Kane after his move back to Devon was confirmed, and it’s easy to see his popularity amongst the City faithful which is something that is hugely appreciated by the youngster. 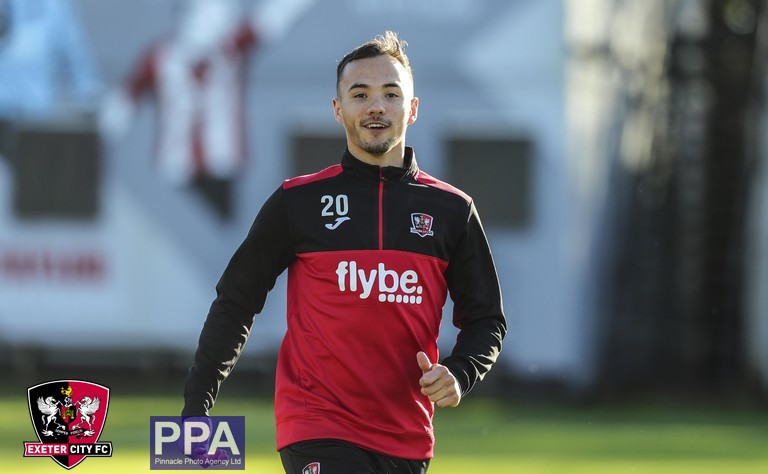 'Once a Grecian always a Grecian.' Kane was pleased to return to the club.

He continued: “The away fans are brilliant but at home there’s always the same people that are there early and it’s always so nice to see them being positive. When I’m on the pitch, home or away, and I run with it or pass it and they scream or cheer I swear it gives me an extra two or three per cent in the situation. They’ve even got a song for me now which I heard last week so it’s a nice feeling.”

But after settling back into life at St James Park, the youngster is hard at work, not only for himself, but for a set of teammates and coaching staff he has grown close to.

“I’ve been working with Greeno (Dan Green) and Wayne (Carlisle) doing extra work. I’ve been working on my crossing and, when I was at left-back, being able to clear the ball. Greeno and Wayne have stepped into their new roles really well and they’re always making sure that I’m working on this or working on that. Matt (Taylor) always supports me with defensive things, as that was his game when he played, and it rubs off, even just doing the basics like heading.”

Having worked closely with his new manager last season when Matt was on the coaching staff under Paul Tisdale, Kane revealed how pleased he was to see Matt step up to take the manager role this season and explained how he hasn’t been surprised by how he has taken to life as the City boss.

Kane explained: “I thought he deserved it. He used to do so much last year so I thought it was natural that he’d step into the role. When he actually got it and then I saw the club were doing well in pre-season, and they got off to a great start, It wasn’t really a surprise.

“We had a really good relationship last year, and this year I knew that I’d be getting game time and, considering our relationship before, it was easy to come back.”

But despite knowing some of the faces already when he walked into the dressing room at City for the second time, what does Kane make of some of Matt Taylor’s recruits this season?

He explained: “I’ve taken well to Nicky (Law) and Lee (Martin.) Lee is one of the funniest guys you’ll meet, and Nicky is a quality player. I heard a lot about him before I came down from speaking to Hiram (Boateng) and Luke (Croll) and they said he’s a quality player. When I got here, I could tell how good he was in the first 20 minutes of training. The team that Matt has put together this year has a lot of depth so if a player comes out then another can come in.” 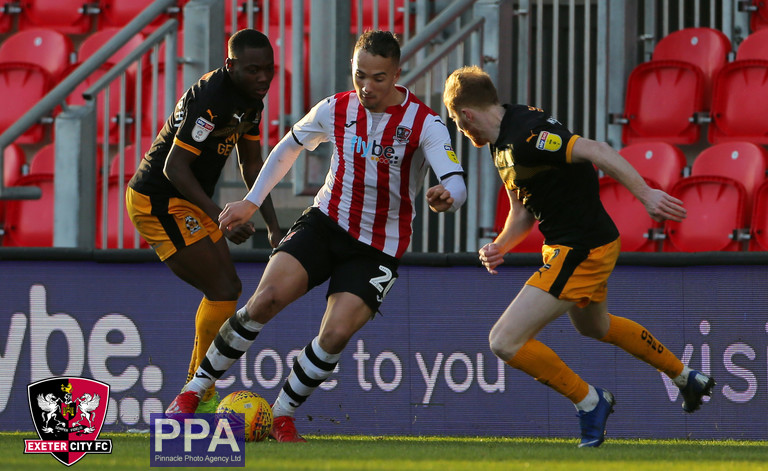 Kane in action for the Grecians against Cambridge United

Also in the ranks this season is another familiar face to Kane in the form of Dara O’Shea, a fellow West Brom teammate. Having not played alongside him for a little while with both having gone on their respective loan spells over the past year or so, Kane couldn’t hide how pleased he has been to see the Irishman develop.

“When I played alongside him in the Newport match away from home, you could feel his presence and you can see the change from when I last saw him,” said Kane. “He’s come on so much and I can see that he’s turned into a man, he’s strong and dominant in the back four and he’s become a vital part of this team going forward and long may it continue. He puts in so much work off the pitch and I’m really happy for him.”

Since Kane’s return the Grecians have tasted defeat once and have hit some positive form at an important stage of the season. With a tough run of fixtures, they picked up an impressive 3-1 win over MK Dons before making the long trip north to take a point away from an in-form Carlisle United.

Reflecting on the recent run of results, Kane admitted he and the players are pleased but are targeting more points over the coming weeks.

He said: “If you’d have asked us before the two games if we’d take four points against two promotion rivals then we’d have taken it. We were unlucky not to win at Carlisle, though, we went 1-0 up after a great finish from Nicky and it was a soft free-kick where, on another day, it may not have been given. They scored from it and they were a good team in the second half so credit to them that they brought it back to 1-1."

In Kane’s appearances since returning to the club the difference between the young man that was red carded at Mansfield back in 2017 and the Kane of today is evident.

The Grecians, until the summer at least, have a player on their hands who understands what it means to represent the club and it’s clear that Kane will do his utmost to ensure that this season ends on a high at St James Park.