The scorer of the 1000th goal under Trust ownership, Jonathan Forte has already confirmed his place in Exeter City history.

The striker, who has a wealth of experience in the Football League, robbed the ball from the Cheltenham Town defence before surging forward and finishing coolly to confirm a 3-1 win for the Grecians back in September.

All in all, Jonathan has found the net eight times in 21 appearances for City this season, a campaign which started brightly as he scored his first goal on the opening day against Carlisle United.

But following his finish against Bristol Rovers in the Checkatrade Trophy in November, the 32-year-old had been finding goals and minutes slightly harder to come by. That was until the excellent win over Swindon Town where he came into the starting 11 and put in an impressive display, topped off by a goal from the penalty spot.

Following a short halt in the fixture schedule, Jonathan admits it was good to have a break last weekend, but he and the players are targeting the continuation of what has been a pleasing run of form, and the forward is keen to add even more goals to help the team.

He said: “Everyone had a few days off and it’s good for the body. We got four wins in five games, so it was good for us and got us back up where we want to be, and we want to push to get into the automatic promotion places.

“We were on the back foot for a little bit (v Swindon Town,) but we got rid of that and got the penalty and then Archie (Collins) scored a wonder goal. 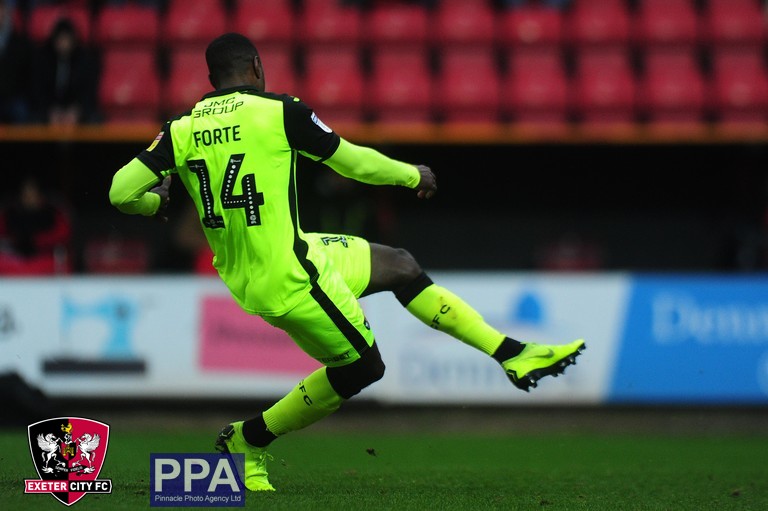 Jonathan netted in the 2-0 win over Swindon Town

“I’ve been out of the team for a few games, so it was nice to get back into the starting line up and grab myself a goal. Every striker wants more so if it comes my way then I’ll be happy.”

Jonathan came through the ranks with Sheffield United, and had spells with the likes of Scunthorpe United, Southampton, Oldham Athletic and Notts County prior to signing for City, and the striker is well aware that after the turn of the new year points become even tougher to come by and the Grecians will have to be at their best if they wish to be successful come the end of the season.

He continued: “There’s probably about 10 teams that could go up, teams that are in and around it, so it’s going to go to the wire I think and hopefully we’re up there.

“It’s the business end of the season where everyone wants three points, so I think it’s going to be even harder this time around. Everyone has got their squads now and they’ll be improving.” 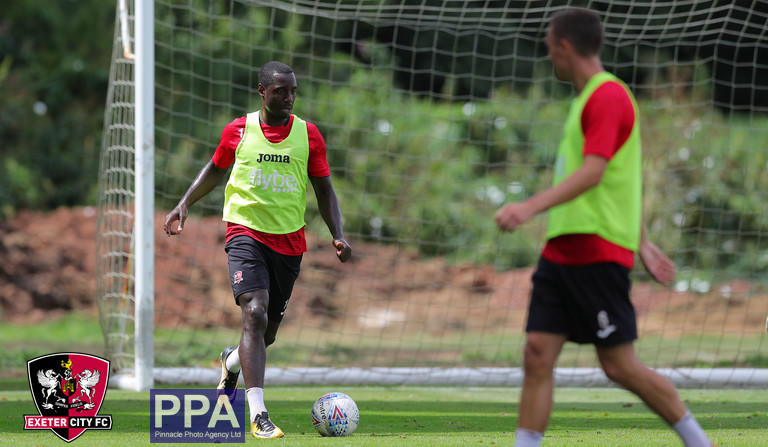 Jonathan in training for the Grecians

With the season heading into an important period as teams look to bolster their squad in terms of personnel to kick on for the rest of the campaign, Jonathan believes there is already high competition for places amongst the City squad which can only bode well when it comes to performances on the pitch.

“There’s still about five players than can play in that position (striker) so it’s good for the club and everyone is fighting for their place and if you get your chance you have to take it,” explained Jonathan.

“Everyone is fighting for their place and there’s only two spots up front, so you have to do your best in training to impress the manager.”

With just 10 matches remaining at St James Park in Sky Bet League Two (prior to the Morecambe game), Jonathan also believes it’s important that City can take as many points from their matches at home as possible as they look to push towards the top.

The Grecians have recorded seven wins at home in the league this season so far, something that Jonathan thinks he and his side will look to build on in the coming games.

On how City sit in the league table and how they are targeting some more wins at home, Jonathan explained: “It can be better but at this time of the season I think we’re in a good position to progress and get higher. You’ve got to make your home ground a fortress, I think we’re doing that recently, apart for the hiccup against Grimsby, but as long as we keep winning games then we’ll be okay.”

It’s fair to say that the City fans have warmed to Jonathan quickly since he arrived at the club, after all it took him just 26 minutes to find the net on his debut as he helped send the home supporters away delighted.

Jonathan added: “The supporters have been brilliant. When you go to the stadium they’re fantastic, they come and greet you and tell you how bad or well you’ve done!”

There’s no doubt with Jayden Stockley departing the club in the January transfer window to sign for Championship side, Preston North End, there has been a gap left in terms of goals.

But make no mistake, in the likes of Jonathan alongside Lee Martin, Matt Jay, Tristan Abrahams and new boy Ryan Bowman, there is a determination to fill that void and battle to replace as many goals as possible. And with the City number 14 fit and firing then the chances of a successful end to the season are bright.