City sit on the periphery of the play-off zone after a stalemate at home to Morecambe last weekend.

The Grecians’ form has been resurgent and culminated in four wins from their last six league outings, subsequently maintaining their concerted promotion push, but Matt Taylor’s men will feel aggrieved for not picking up all three points against a stubborn Morecambe side.

Exeter now turn their attentions to Newport County AFC on Saturday. A side in freefall after failing to win any of their previous six league games. However, the Welsh side can still be buoyed by an improbable victory against Premier League side Leicester City less than a fortnight ago.

The fortunes of Exeter’s opponents could not be in stark contrast though, with the visitors well in the ascendency and pushing for promotion earlier in the season.

Here’s your lowdown on Newport County:

County were formed in 1912 and have faced a turbulent time down the years with financial problems and relegation a recurring theme during the club’s early years.

Some highlights included promotion to the now-known Championship in 1937/38, while they astonishingly reached the 5th round of the FA Cup in 1948/49 where they bowed out to Portsmouth in front a record attendance of 48,581 at Fratton Park.

Their most fabled achievement came in the 1980/81 European Cup Winners’ Cup when they bowed out at the quarter-final stage against East Germany’s Carl Zeiss Jena. County’s remarkable run cut short, just when European powerhouse Benfica, beckoned in the semi-finals.

Since their reformation as Newport County AFC in 1989, the Welsh side have won the Conference South in 2010 and played in League Two since 2013.

Born in Newport and starting his playing career in the town of his birth, it was only fitting Michael Flynn would go on to manage Newport County.

After that fleeting year with Undy, Flynn moved back to Newport where he miraculously lead the club to safety in 2016/17, with the club looking destined for the drop after being 11 points adrift at the bottom of League Two.

Previously as caretaker manager of the club, Flynn understandably got the job on a permanent basis and continued the club’s revival with an 11th place finish the following season.

The second-oldest stadium in the Football League after Deepdale, Rodney Parade hosts not only Newport County but also Newport RFC – the rugby union side.

The football team moved into residence at Rodney Parade in 2012 after relocating from their original home, Newport Stadium which housed them for 18 years from 1994.

Their record attendance during those 18 years came in 2006 when they faced bitter rivals Swansea City in the FA Cup with 4,616 people in attendance.

The villain in the eyes of the Grecians following his goalscoring exploits in the two sides’ last encounter. 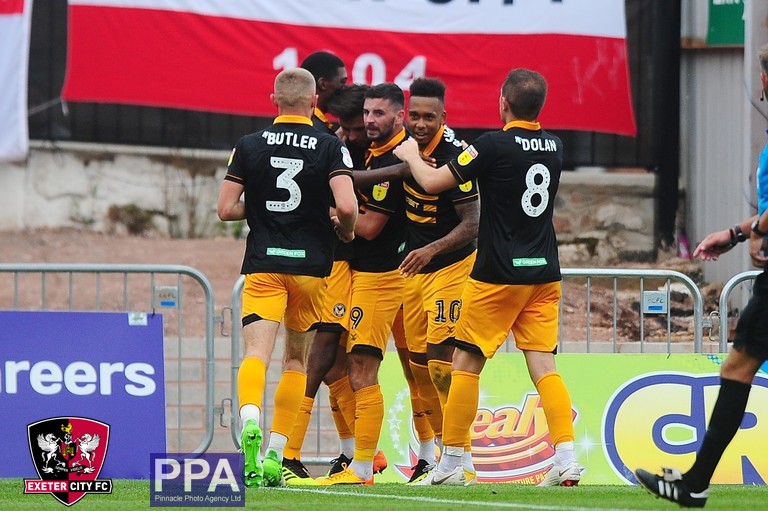 The young Welshmen’s late leveller in the 1-1 draw in August prevented Exeter from maintaining their 100% start to the season. The tricky winger has three goals from twenty appearances this season and will be looking to impose himself against Exeter once more with his loan deal from Cardiff City coming to a close.

Newport’s recent form woes have seen them fall well out of the promotion picture after losing five of their last six league games, but County can at least console themselves with the remarkable feat of making the FA Cup fourth round after knocking out Premier League heavyweights Leicester. 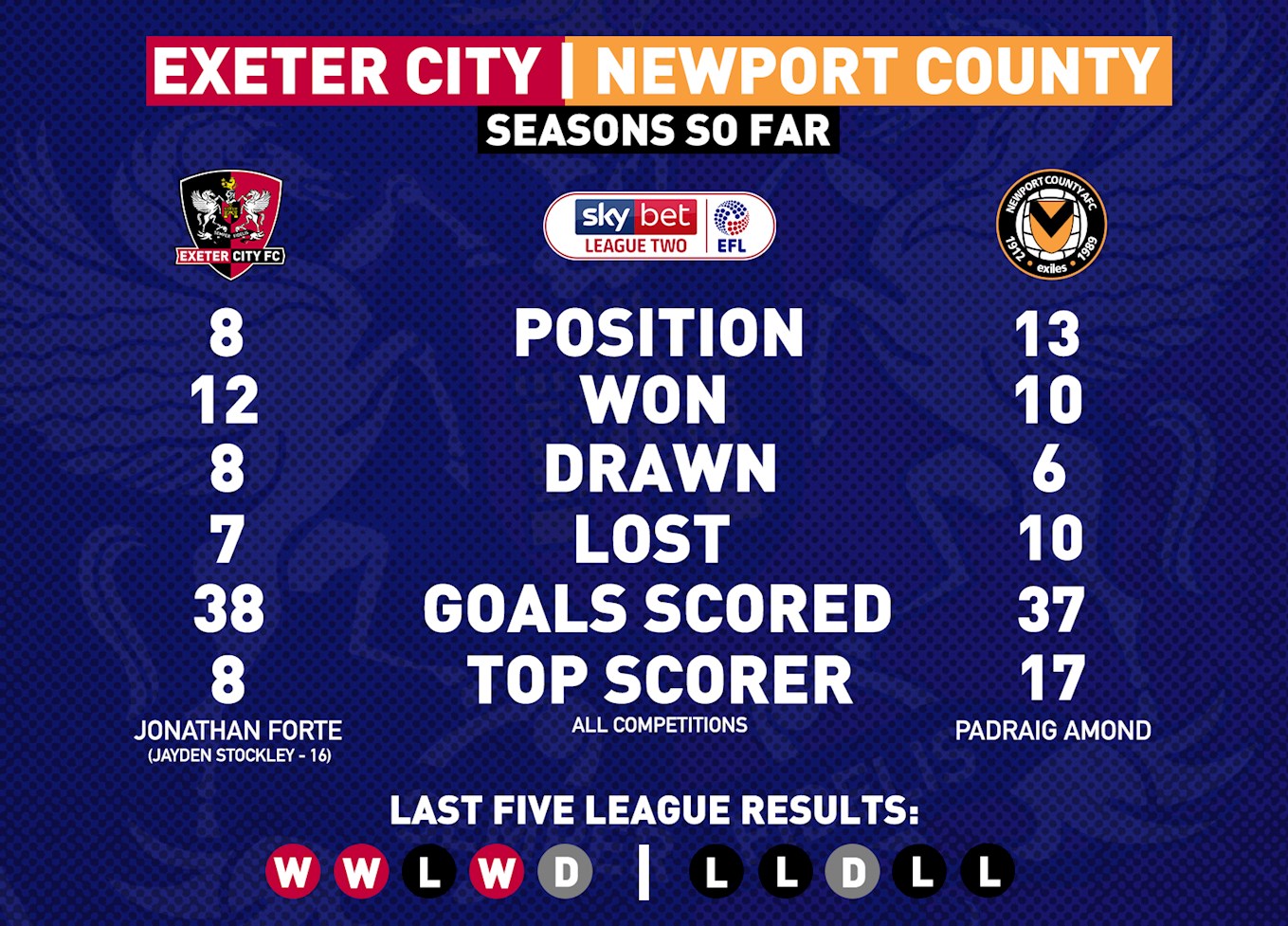 An impressive season where Mike Flynn consolidated his sides position in League Two with an 11th placed finish was even more notable for a deep FA Cup run where they took Tottenham Hotspur to a fourth round replay after drawing the first tie 1-1 at Rodney Parade.

Upon that run they also exacted their revenge on Leeds United, beating them 2-1 in the third round, after the Championship had halted County’s progress in the EFL Cup with a 5-1 demolition at Elland Road.

Newport’s league campaign got off to a fine start with the Welsh side occupying the play-off spots for much of the season leading up to November. Any promotion hopes harboured soon fizzled out with County having to accept a midtable finish.

The Grecians rued a late equaliser from Mark Harris, but still maintained their position at the top of the table after three games on the board.

In an evenly-contested match, Exeter looked set to secure all three points after familiar hero Jayden Stockley had grabbed the only goal of the game, but Harris rifled home late on to give Newport a much-needed point.

New Year’s Day brought plenty of joy for the hosts, as they moved to within three points of seventh-placed Exeter courtesy of Robbie Willmott’s 30 yard screamer.

Newport had taken an early lead through Padraig Amond, before Stockley restored parity soon after the restart. Up steps Willmott and cushion of a mere five points separated 11th place Newport and 3rd placed Coventry City.

Tickets in block G of the Bisley Stand, which is reserved covered seating of 400 are SOLD OUT. Uncovered, unreserved seating in the area behind the goal with a capacity of 600 hundred people are now on sale.