Noah Smerdon is delighted to have secured a move to Exeter City after the 1931 Fund helped provide an undisclosed fee to West Bromwich Albion for the youngster.

The 18-year-old spent time with the Baggies within their youth setup but departed the Hawthorns and joined Gloucester City in 2017.

For their part in Noah’s development West Brom are entitled to a fee for the youngster upon his move St James Park, and with the help of the 1931 Fund, the club have been able to acquire the services of the defender.

The 1931 Fund is a group of around 60 Exeter City supporters who all donate £19 a month to help pay towards an extra member of the first team squad.

The fund is named after Exeter City’s famous FA Cup run from that year and has helped fund the wages of players like James Norwood, Graham Cummins, Pierce Sweeney and Jack Sparkes, now totaling £140,000 since its launch.

On signing for the Grecians, Noah explained: “I’m delighted to have joined Exeter City, I know about the history of the club and the players that have come through here. It’s a really good opportunity.

“There are some high-profile names to have come through like Ethan Ampadu and many others.”

Having been able to secure a move to St James Park with help from the fund, Noah was thankful to the City supporters and is looking forward to performing in red and white.

He explained: “The fans are obviously a massive part of the club, it’s owned by them, and the whole 1931 thing shows the link between the club and fans. I’m really looking forward to playing in front of them.” 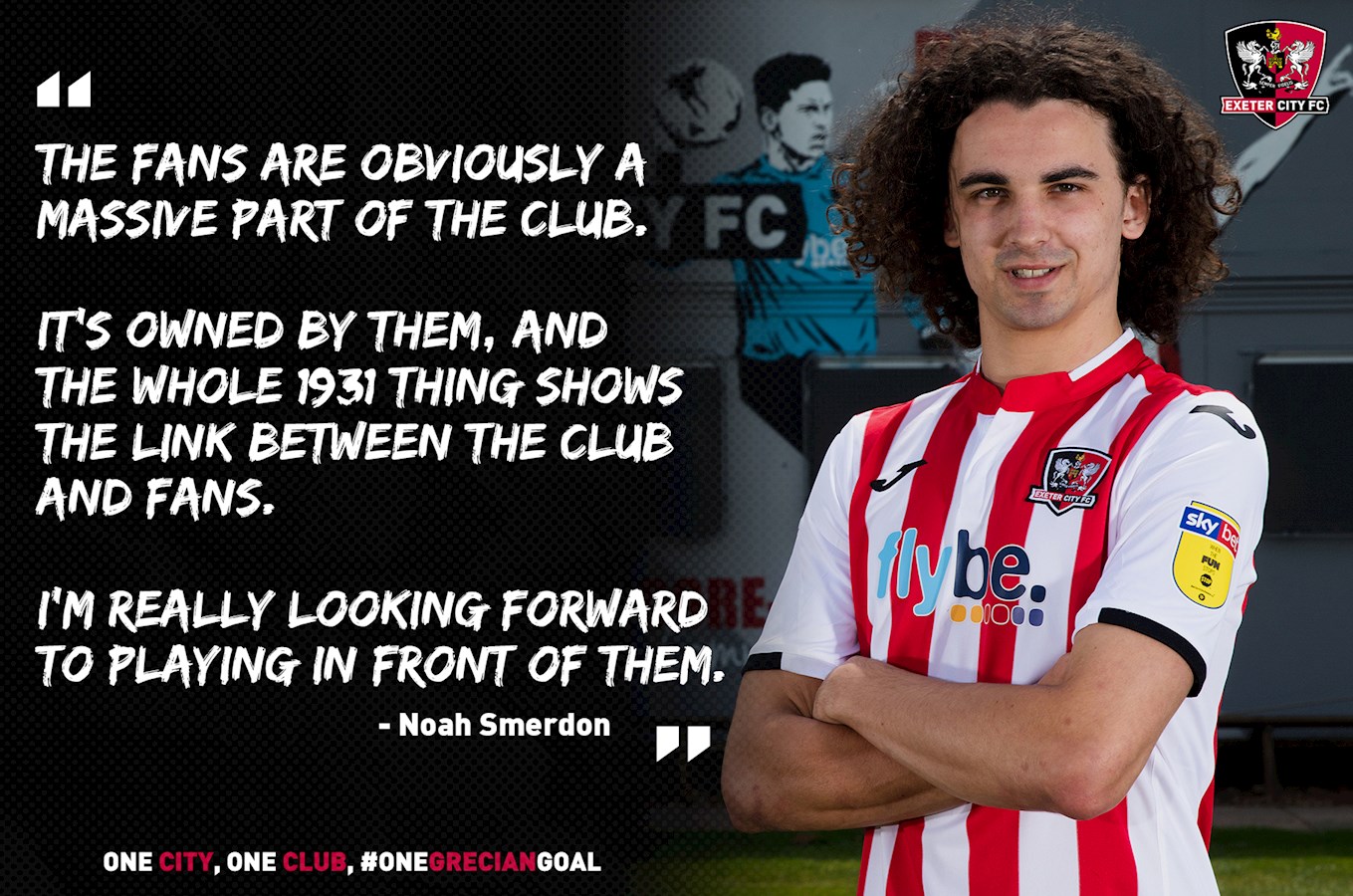 Alan Crockford, who helped set up the 1931 Fund, says he is pleased that once again the supporters can help make a positive impact on the football club.

He said: “For lots of us we see it as a sort of Exile tax, whereby if you do have a few weeks where you can’t get to a home game, then at least you know that by paying £19 into our fund then you’re representing a turnstile click and contributing to the cause in some way.

“We all want to do our bit and it’s nice to see that we can play a small part in that process.”

“This is the 10th season and we’ve paid in £140,000 over 10 years. Our contribution is doing our bit to chip in and it’s nice that we’ve been able to organise ourselves in such way that is a tangible product that we can offer and say: ‘we did that, we paid for that.’ In that sense, it’s a nice scheme.”

Having helped the Grecians bring in another player to help strengthen manager Matt Taylor’s options for the 2019/20 season, Alan is excited to see the youngster in action for the Grecians.

“If I’m being honest, Noah’s name became quite high profile and he popped across my radar,” said Alan. “It’s nice that we’ve played our part in bringing him in. Most fans have been aware of him being linked with us and it’s great that, in addition to paying towards someone’s wages, we’ve been able to pay towards the transfer fee. We’re excited to see how he gets on around a very talented group of young players.”

Noah becomes Matt Taylor’s ninth signing of the summer transfer window and the City manager is pleased to have secured the services of a promising young talent.

He explained: “We’ve tried our best in terms of recruiting in the right areas, Noah is someone who has been on our radar for some months now. We’ve watched him several times and we’ve got good reports from various managers who he has worked under at Gloucester in Marc Richards and Mike Cook, now.

“He’s a player with huge potential and hopefully this is the right club for him to develop that potential and become a first team player.”

Matt was also keen to praise the 1931 Fund for their continued support to the club having helped to secure the signing of Noah.

He continued: “There’s a long line of good players who have worn that shirt. Jack Sparkes in more recent times, but you look back over the years, and they’ve produced a fantastic amount of money for this football club and it always helps.

“It’s allowed us to bring in Noah, he was contracted to Gloucester, but we also owed a little bit of money in terms of a tribunal to West Brom and the 1931 Fund have helped us do that and secure his services. Hopefully we can now take it to the next level and keep his progression and his development paramount in our minds. It’s all he’s got to concentrate on for the next two years of his life and hopefully he will go on to have a successful football career.”