Alex Fisher says he cannot wait to turn out for the Grecians at St James Park after agreeing a deal to sign for Exeter City following his departure from Yeovil Town.

Alex, who began his early career with Oxford United before going on to play in Spain, Belgium and Italy, before having spells with Mansfield Town, Torquay United and Motherwell, is manager Matt Taylor’s fourth summer signing and is looking forward to getting started with City.

The 28-year-old explained: “I’m absolutely delighted, I spoke to the gaffer last week and I was really happy to get this one over the line.

“St James Park is the ground where I made my first ever professional start, so I’ve got memories of the stadium. I played last year when the new stand was finished, and it really added a new dimension.

“Playing down towards the Big Bank is a really formidable place to play against, so being able to shoot towards it for the club will be a real motivation for me.”

Having played against the Grecians over the past couple of seasons, the new City forward knows what to expect from League Two and says he will be going into a strong dressing room at St James Park.

“It’s going to be a really competitive league next year with some good teams coming up and some strong teams coming down, but I see no reason why we can’t be right up there,” said Alex.

“I had a short spell on trial here a few years ago and some of the personnel are still the same so it was nice to see some friendly faces. They’re always a really tough team and St James Park was always a really tough place for an away team to go and it’s certainly a great atmosphere on the Big Bank. I’m really looking forward to the opportunity to perform in front of them (the fans.) 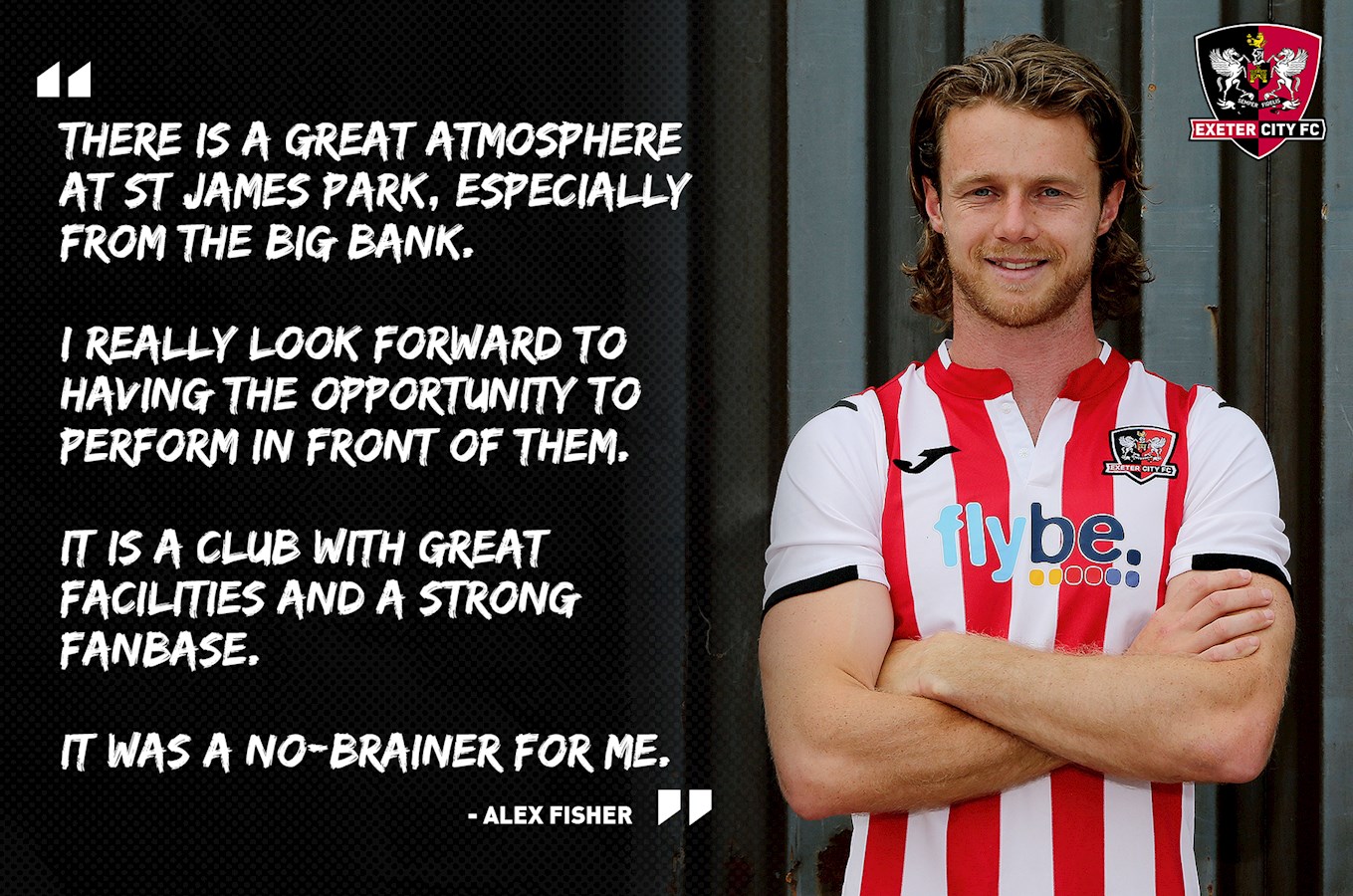 Alex also revealed it was the ambition shown by manager Matt Taylor that helped convince him to join the club, as well as the facilities at the stadium and the training ground.

He continued: “The manager’s vision for the season is how it’s always been with this club, it’s a really competitive league and it’s a club that is going to be up there. It’s got great facilities, a really strong fanbase, and it was a no-brainer for me.

“He’s (Matt) got a strong ambition and is someone that knows what he wants to do and how to achieve it. It will be a great opportunity, personally, to be able to try and help him and the club achieve what it can do this season.”

Alex will go straight into Matt Taylor’s squad who begin their pre-season fixtures away at Jersey on Friday, June 28, and the forward will be looking to integrate himself into the group as he goes about trying to help City to success in the 2019/20 campaign.

He explained: “It’s a classic cliché but a strong pre-season will stand you in really good stead and I feel like that can really benefit me here and it will help to integrate myself with the team.

“I consider myself a really hardworking number nine or 10. I will run the channels and win my headers, and given the chance, I like to think I’ve got an eye for goal. Above all else I’ll give you hard work, a strong work ethic, and I believe all the rest will fall into place after that.”