It's hard to believe that it's been six years since Matt Jay first turned out for the Grecians.

As a fresh-faced 17-year-old he featured in an EFL Trophy defeat to Wycombe Wanderers. He followed that up with two more appearances that season and turned out sporadically over the next few seasons, which featured some time on loan.

Matt first made a real mark on the first team last season as a substitute when he popped up with an important goal, his first in the league for the club, as the Grecians picked up a 3-2 win towards the end of the 2017/18 campaign at Cambridge United.

He’s spent much of this campaign on the peripheries of the starting line up under Matt Taylor, but with injuries hampering the team in recent weeks, the 23-year-old has stepped up and retained his place in the starting line-up.

A starting place and a goal against Crewe Alexandra was replicated a few days later at Lincoln City in spectacular fashion, and Matt has continued his positive form into the last couple of matches.

There’s no doubt that Matt is a different player to the one that emerged as a 17-year-old. Under Matt Taylor he’s been deployed in a slightly deeper role and he’d be the first to admit that his game has developed.

Looking back at those early matches, though an exciting part of his emergence into the first team, Matt feels that game time may well have come too soon for him.

He explained: “I was so nervous. I probably wasn’t ready at the time, but at that moment it was a nice feeling and I was rewarded for training well with the first team, but looking back I probably wasn’t quite ready. 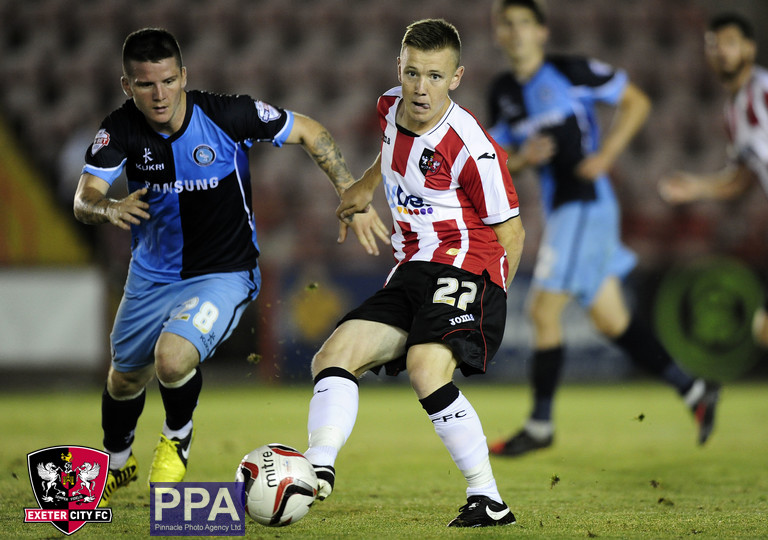 Matt during his debut against Wycombe Wanderers

“I feel like now I’ve matured much more, and I’ve grown into my body and my mind, so now I feel I’m ready to kick on. Every footballer’s path is different, and people develop and peak at different times and hopefully this is the start of good things to come from me.”

Matt’s enjoying his time in the starting line up at the moment and it’s clear he’s recognised an opportunity that he’s not willing to let go of as he hopes to keep his place in the team on a regular basis.

“It’s been really good recently,” said Matt. “I’ve been working hard and sometimes you have to wait longer than you’d hope to, but it’s been good to get some more game time and help the team where I can. It’s nice to be able to contribute with a couple of goals and some good performances. We could have picked up two more points away at Lincoln which would have been really good.”

Matt’s tireless performances of late have been capped off by two excellent goals, the first of which won the match up at Gresty Road, and the other a fantastic free-kick which earned City a point at top of the table, Lincoln City.

On scoring and his good form of late, Matt said: “It’s about doing the best you can for the team. It was a nice confidence boost for me (to score), it’s something that’s been lacking in my game over the years and people have probably questioned me over the years. 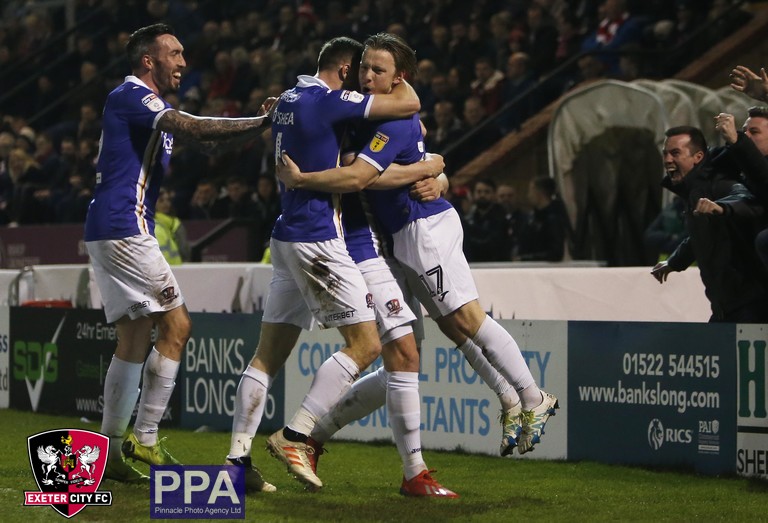 “I keep working hard in training and in the reserve games, so it was really nice to do it and score the winner at Crewe. It was a really nice feeling (to score against Lincoln) because the fans had travelled a long way and to score a free-kick there was really good. That’s what you want to do, give the fans something to be happy about and make their trip worthwhile.”

The recent match at Northampton saw four City academy graduates given starting berths in Alex Hartridge, Archie Collins, Christy Pym and Matt himself. As a player who has come through the ranks at City, and knows all about what it takes to do so, what does he think of the current youngsters at St James Park?

“The academy is spoken about highly for bringing lots and lots of players through. We’ve seen Archie Collins come into the team this year and he’s done really well off the back of Hiram (Boateng) being injured and there being a spot for him. He’s come in and done really well and kept his place. The boys out on loan are doing good things too so I’m sure there’s many more to come through.”

Matt was one of a few players who have gone through play-off final heartbreak over the past two seasons. But in a tight-knit group he insists that the experiences of the past two years can be used as a motivation for this season, and the remaining matches.

“We had a meeting not so long ago and said that our aim is still the top three,” said Matt. “It might not look that way at this current stage but there is still plenty of points to play for. The experiences of Wembley are only going to stand us in good stead if it comes to that but there are an exciting couple of months left of the season and, hopefully, we can get to where we want to be.

“We’re really lucky because quite a few players have stayed from last year and the year before, so we’ve got a good core group and then everyone that has come in are good characters and we make everyone feel welcome and part of the Exeter City way, so we’ve got a really good group.”

“Defeats are hard to take, but it’s good to have a positive morale in the camp to try and get three points in the next game. The Tranmere game was one of those games where we had to see it out until half-time, get in at 0-0, and then come good in the second half. It would have been good to get at least a point at home and Northampton was a real tough day. The conditions were tough, as they were for both sides, but I felt we had enough to get the points, but we have to dust ourselves down and go again. We’re confident that we can pick up a run and get some points together.”

Whatever happens before 5pm on Saturday, May 4, at the New Lawn when the Grecians finish their fixture schedule against Forest Green Rovers, with Matt Jay in and around the team, City will have one of their own fighting tirelessly for shirt and giving his all to help the team in whatever way he can.