Exeter City will be looking to build on their positive win over Colchester United at St James Park when they make the trip to Meadow Lane to take on Notts County.

The Grecians’ last visit to Meadow Lane saw them record a 2-1 win on their travels and they’re about to come up against a County side who will be eager to pick up three points as they look to confirm themselves a spot in the Football League for next season.

Here’s all you need to know about Saturday’s opponents…

Having been founded in 1862 Notts County are the oldest professional football club in the world. One of the bigger names in Sky Bet League Two they boast one of the biggest grounds also, with Meadow Lane seating nearly 20,000 spectators.

Notts County were one of 12 founder members of the Football League back in 1888 and they boast quite a history. Their first season saw them finish in 11th place and they went on to reach the FA Cup final back in 1891 but were defeated by Blackburn Rovers. They would return to the final in 1894 where they beat Bolton Wanderers at Goodison Park.

They continued to develop as a club over the following decades, picking up Second Division titles along the way and they sealed themselves a spot in the First Division in 1981 under Jimmy Sirrel.

In more modern times Alan Hardy took over ownership of the football club in 2017 and appointed Kevin Nolan as manager. The former Bolton Wanderers midfielder guided County into the play-offs last season but they were beaten at the semi-final stage by Coventry City.

Neal Ardley took the managerial reins in November, becoming the club’s third manager this season with the club battlgin to get out of the relegation zone. His arrival at the club follows a three-year spell in charge of Wimbledon whom he left by mutual consent just a few weeks prior to joining Notts County.

It was actually Wimbledon where Ardley’s professional career was founded. After coming through the youth academy the former right-back spent 11 years at the Dons amassing 245 appearances for the club, where he spent seven seasons in the Premier League. 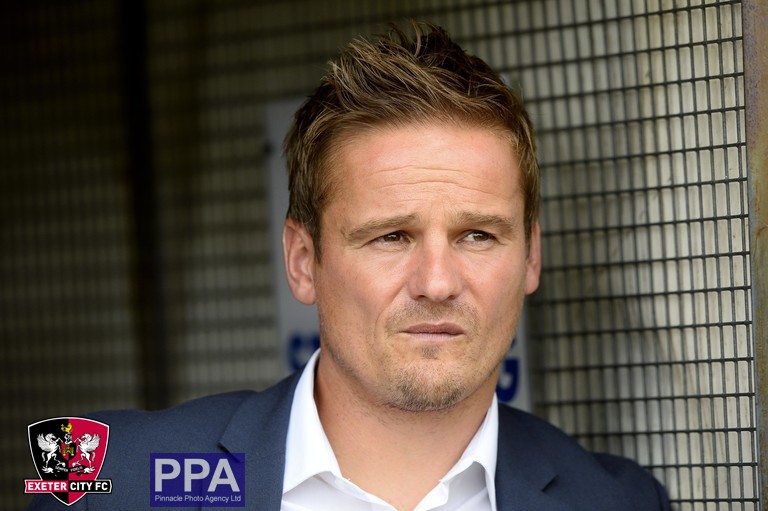 Other notable moments during this spell included 6th and 8th places finishes in the top flight and semi-final cup runs to both the FA Cup and League Cup in 1997. During these blossoming early years, Ardley also picked up 10 appearances for the England under-21 side.

The man from Surrey then made the move to Watford in 2002, spending three years at the club and turning out over 100 times for his side. Ardley then wound down his career with Cardiff and Millwall with one season at either side.

Upon retirement Ardley returned to Cardiff, becoming manager of the club’s academy in 2007 and spent five successful years in Wales. Alerted to the now 46-year-old’s growing managerial promise, AFC Wimbledon took a punt on their former defender and so it proved a wise decision, as Ardley saved the team from relegation in his debut season.

With Ardley enjoying his foray into the world of management, his peak arrived in 2016, as he led the team to promotion to League One via the play-offs and has consolidated their place in the third-tier since. Early season difficulty in 2018 resulted in Ardley leaving after six years in charge and his appointment at Notts and subsequent relegation battle represents perhaps his biggest challenge to date.

With a capacity of 19,841, Meadow Lane is one of the largest stadiums in the division and was built in 1910. Over the years the ground has been consistently developed and rebuilt, particularly following the end of World War Two. 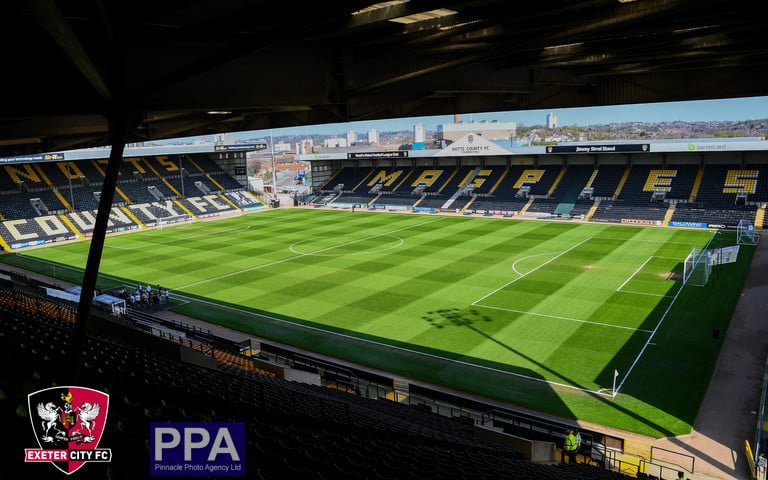 Located near a cattle market near the River Trent the land was initially leased from the local council. The first game at Meadow Lane saw County take on rivals Nottingham Forest in what was a 1-1 draw. The Meadow Lane end was demolished for reconstruction in 1978 with more modern facilities put in place with the aim of generating more match day revenue. Following the Taylor report, throughout the 1990s the club continued to modernise their stadium in order to make it a safer experience for supporters.

One to watch- Enzio Boldewijn

Notts County made Enzio Boldewijn their record signing since 2011 after paying Crawley Town over £250k for his services in the summer and he’s certainly slotted in seamlessly during his eight months at the club.

After rising through the ranks at FC Utrecht in Holland, Boldewijn got his break on English soil with Crawley Town in 2016. Last season he scored and assisted 10 goals apiece, resulting in the Magpies to come knocking. 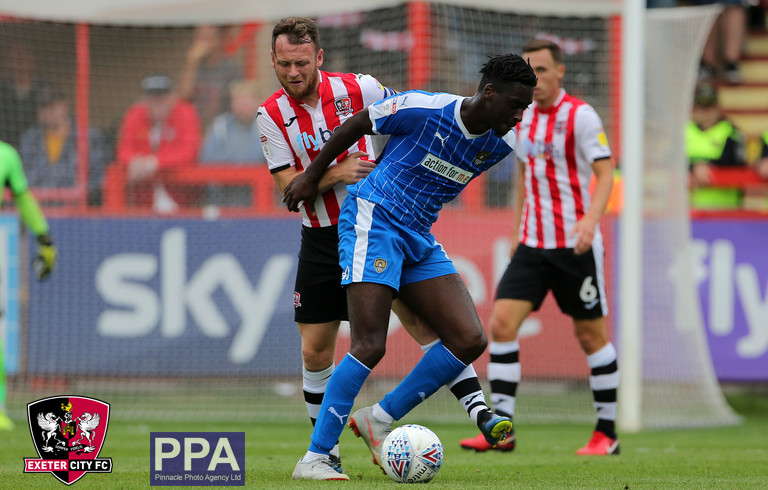 The Dutchman has demonstrated a penchant for the spectacular this season, with three of his four goals coming outside the box. Boldewijn netted against the Grecians when the sides last met back in September in what was a 5-1 win for City.

Unfortunately for Notts County it has been a difficult season right from the get-go. An opening day draw against Colchester preceded six straight defeats, with the fourth of those resulting in manager Kevin Nolan departing the club.

Form momentarily picked up with two draws and three successive victories under Harry Kewell lifting the side to 17th place. That purple patch was short-lived and once again, the manager paid the price and Kewell was dismissed with just three victories since joining.

Neal Ardley then stepped in and the new boss initially managed to lift the club off the foot of the table for the first time in 2019.

February started well with a draw and two wins, but Notts were brought back down to Earth with a 4-1 home loss to Newport County and then a 1-0 defeat to Tranmere Rovers.

The next month started with a 0-0 stalemate with Port Vale, before they lost 4-1 to Cheltenham a week later. An 3-1 away win at Carlisle United propped the Magpies up to 23rd and four points from safety.

However, Ardley’s men failed to follow up on that win in their most recent fixture as they were held to a goalless draw at home to Morecambe with the hosts slipped back to the foot of the table on goal difference.

Last season saw a largely positive campaign for the Magpies under the stewardship of Kevin Nolan. Despite defeat on the opening day of the season, to eventual play-off final winners Coventry City, Notts County actually had a strong start to the 2017/18 campaign having tasted defeat just twice in their opening 10 fixtures. They hit some difficult form over the Christmas period with back-to-back defeats at home to the Grecians and then Crawley Town. 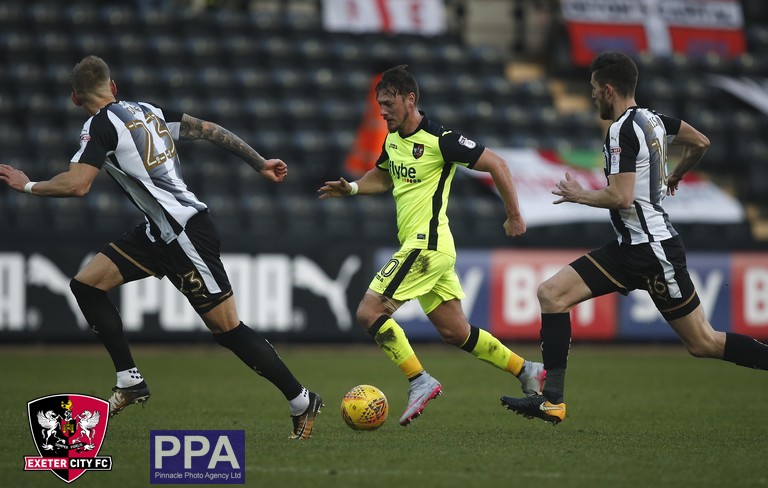 They spent much of the season battling in the automatic promotion places as well as the play-offs, but their fate was sealed in fifth place, three points behind City in fourth. This meant they were drawn with Coventry in the play-offs with the first leg seeing now City striker, Jonathan Forte, net in a 1-1 draw. But Coventry managed to book their place at Wembley when they sealed a 4-1 win at Meadow Lane meaning the Magpies would remain in League Two for the following season.

A fantastic day for the Grecians saw them net five times with Pierce Sweeney and Jayden Stockley netting twice before Aaron Martin headed in late on.

The Grecians collected all three points on their travels to Meadow Lane as both sides pushed for promotion. Jake Taylor found the net after just eight minutes when he popped up to find the net from close range. Jayden Stockley then scored a fantastic goal with his left foot from outside the box to put City in control. A Jon Stead penalty pulled a goal back for County on 73 minutes, but the Grecians were able to hang on for an important three points.

A tough night for the Grecians saw them fall behind just a few minutes into the game when Lewis Alessandra found net. Jorge Grant then struck twice for the away side to condemn City to an early season defeat.