A pacey right back with a great attacking instinct, Kane Wilson has been on the books at West Bromwich Albion since the age of seven.

Part of an exciting youth cohort, which included the likes of Sam Field and Jonathan Leko, Kane made his senior debut in August 2016, just a week after receiving his GCSE results.

Capped by England at under-16 and under-17 levels, he arrived at St James Park on loan for the start of the 2017/18 season, making 22 appearances and scoring one goal as the Grecians fought their way into the League Two play-off final. Having spent the start of the current campaign on-loan at Walsall in League One, Kane returned to Exeter in January and will be hoping to go one better this time out.

46 – Having had a month to settle in, Kane experienced a real baptism of fire, making his City debut against Plymouth Argyle in the Football League Trophy. Having made the 46-mile trip down the A38 to Home Park, he put in a strong showing as the Grecians took the lead on two separate occasions. Unfortunately, however, they were unable to hold on, ultimately losing out 5-3 on penalties.

2 – Having impressed the coaching staff in training, he made his League Two debut later that month, away at Mansfield Town. However, having been booked during the first half, Kane ended his first taste of league football with an early bath, receiving a second yellow in stoppage time for kicking the ball away. Thankfully, however, his dismissal did not affect the game, with City holding on for a 1-1 draw. 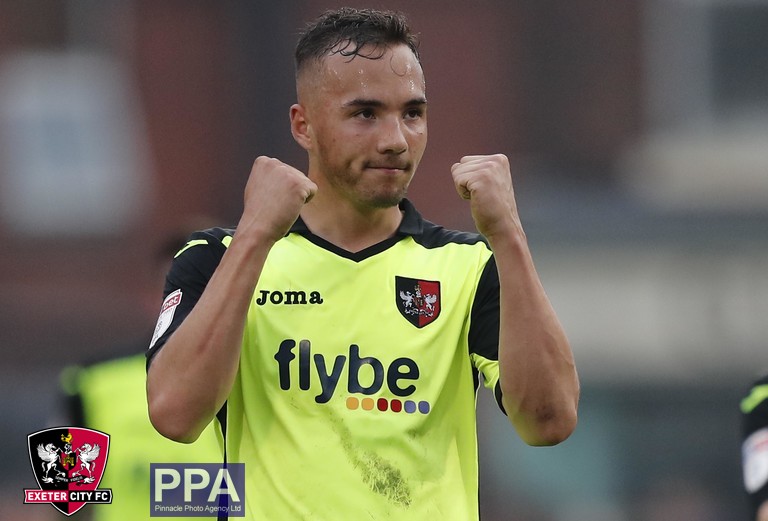 18 – Undeterred, Kane learnt from the experience, soon laying claim to the berth on the right-hand side of the defence. One of his brightest moments came in December 2017, when the Grecians played host to Barnet in an extremely hard fought encounter. With the clock ticking past the half-hour mark, he picked the ball up on the edge of the eighteen-yard-box, slotting an audacious left foot drive into the bottom corner. Having helped City to win the match, his exploits also earned him the club’s goal of the month award.

81 – Unfortunately, just six games later, Kane’s passion once again got him in trouble with the footballing authorities. With City leading away at Grimsby, through a Jayden Stockley penalty, the young right-back saw red in the eighty-first minute for a second bookable offence. However, although the final ten minutes proved nervy for the travelling faithful, the Grecians held firm, wrapping up a crucial three points on the road.

73 – Having left St James Park in May 2018, Kane spent the first half of this season on loan at Walsall, before returning to the Southwest to further his footballing education. Slotting straight into his old right back position, he made his second debut away at Newport County, putting in a strong seventy three minute shift as the Grecians lost narrowly to the Exiles.

9 – Since his comeback, he has featured in nine fixtures and has widely impressed. A constant threat from right back, his finest appearance thus far came away at table-topping Lincoln City, in which he was the source of much of the Grecians’ attacking play. Unfortunately, however, although Exeter took the lead through Matt Jay, they were pegged back deep into stoppage time, with a 96th- minute John Akinde strike ensuring that the spoils were shared.