Next up for the Grecians is a trip to a Northampton side in red hot form following back-to-back victories and who are also undefeated in five league games.

Here’s everything you need to know about Saturday’s opponents.

Northampton’s early years saw them reside in the Northants League and Southern League and the Cobblers were also under the tutelage of legendary manager Herbert Chapman, before he left in 1913.

The club were first admitted to the Football League and Division Three South in 1920, as a historic first and spent almost forty years there before relegation to Division Four in 1958. Shortly after, the Cobblers spent a solitary season in Division One in 1966, but were instantly relegated.

Subsequently, the club have continued to meddle around the third and fourth tier of English football to this day, but remarkably have never been outside the Football League since 1920.

A spectacular playing career saw manager Keith Curle ply his trade in all four divisions of the Football League, as he racked up over 150 appearances at both Manchester City and Wolverhampton Wanderers respectively.

The former defender also represented both Bristol City and Bristol Rovers, as well as Sheffield United and Reading. While three England caps were just reward for an esteemed playing career that consisted of more than 700 professional games.

After hanging up his boots, Mansfield Town, Notts County and Carlisle United have all been managed by Curle before the former England defender took up the post at Northampton in October, going on to alleviate the club’s relegation fears.

The Cobblers first stadium was the County Ground which opened 1897, but the desire for a new, modern stadium stopped the traditional ground from reaching its 100-year anniversary.

The Sixfields Stadium opened in 1994 with a maximum capacity of nearly 7,800 people and was completely maxed out in 2016 when Premier League giants Manchester United came to town.
As of 2018, the stadium has undergone a name change for sponsorship reasons and is now known as the PTS Academy Stadium.

After coming through the ranks at Manchester City, Shay Facey has already become a well-travelled footballer with loan stints out in the MLS with New York City and then Eredivisie side SC Heerenveen. 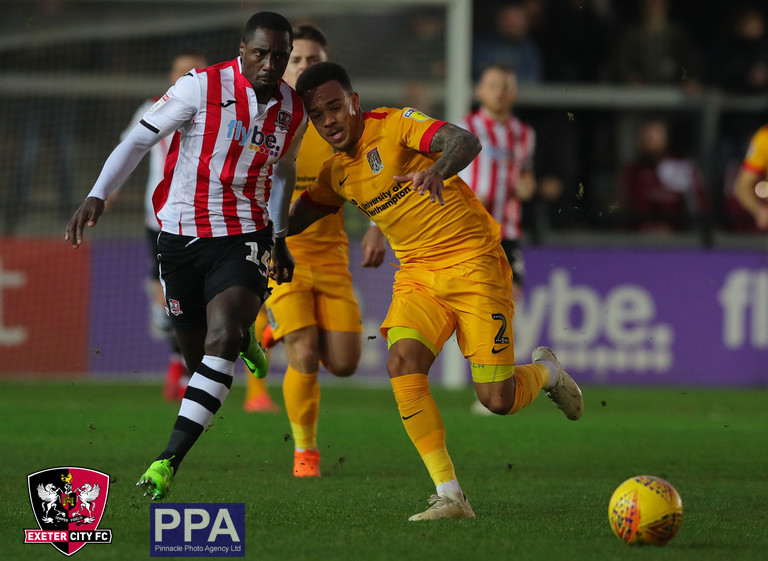 The 24 year-old who can play both right back and centre back made the perfect switch to Sixfields in January 2018 and has gone on to become a mainstay in the Cobblers backline with twenty-one league appearances to his name.

Despite Northampton’s lowly position of 16th, do not let that fool you of how they’re faring right now. Back-to-back away wins in the league have propped the Cobblers up to 16th place.
Curle’s side are also undefeated in five games having picked up three wins in their last four away games, including the scalp of Exeter’s opponents last weekend, Tranmere Rovers.

Four defeats in a row at the start of the season, provided Northampton a very ominous view from the outset on how they might fare for the season ahead.

By Christmas and the Cobblers prospects of avoiding the drop did not seem to subside either, as they picked up demoralising defeats away to Doncaster Rovers and Portsmouth.

A New Year seemed to signal a new team though and a run of three league victories had lifted them out of the relegation zone after a fine January.

They would stay there as long as mid-March, but a horrendous capitulation in the business-end of the season culminated in what seemed an inevitable relegation since a ball was kicked.

A miserable March had undone any chance of a fightback, but it was not until May and a 1-0 defeat at Walsall that the Cobblers fate was finally sealed.

The Grecians were pegged back twice by Northampton, as the home side lost further ground on league leaders MK Dons.

Jake Taylor got the hosts off to a bright start, opening the scoring within fifteen minutes, but Billy Waters equalised shortly after.

Jayden Stockley then gave his time a timely lead once again and minutes before the interval, but were struck a cruel blow when Andy Williams equalised deep into injury time.

A significant moment in Northampton’s history, let alone season, as they were crowned champions of League Two despite being held to a draw.

The Grecians still remained firmly in the hunt for promotion, despite the talismanic Stockley spurning several chances.

The home side kept up their 100% start to the season, whereas Exeter were brought down to Earth with a whimper following a 3-0 trouncing.

Jason Taylor, Ryan Cresswell and Marc Richards got the goals that condemned the Grecians to their first league defeat of the season.

Tickets are on sale, and cheaper in advance for Saturday's 2pm kick-off at the  PTS Academy Stadium. Click here for all the details