With no home matches in May to present the prize, we have a little more space than usual to give a bit of background to Charles, who has an interesting story to tell, here are some of his anecdotes. 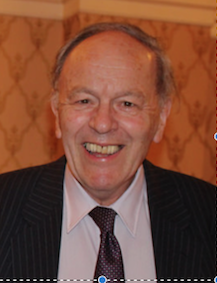 Charles was originally from Devon, although has lived in London most of his life, much of the time as a Circuit Judge in the London Courts. His father was an avid Grecians fan, who rarely missed a match, according to Charles 'he moaned about them a lot but followed them loyally nevertheless - latterly in the Cow Shed when he was no longer able to afford a season ticket'.

"One of my early memories is being taken to City's match against Chelsea in the FA Cub in January 1951 when I was 7. The crowd was so immense I was lifted off my feet as we approached St James’ Park. My mother promptly took me home!" said Charles

He watched some renown matches: "In January 1969 Dad and I watched City play Manchester United in the third round of the FA Cup. The previous September Dad had come to London and we went to White Hart Lane to watch City play Spurs in the League Cup – not only did City lose 6-3 but, worse was to come, Dad had his car towed away.

"Dad kept his counterfoils for that game and he produced them to obtain two Grandstand seats for the United game. A great occasion it was and when City scored an early goal I stood up and got very excited but my Dad was more sanguine - City lost 1-3. Dad died in 1971 having missed very few City games.”

And finally a few words about City’s more recent status: “It is a wonderful achievement to have become a vibrant community club after being so close to extinction. On my very rare attendances I am greatly moved by the participation of loyal supporters and helpers and the overwhelming community spirit. A play at the Northcott Theatre a few years back celebrated City’s defeat of Newcastle in the League Cup in 1981 and captured the spirit of the loyalty of Exeter to its football club. Long may it continue.”

The Exeter City Foundation is a great deal, particularly for those who are regular supporters of the club. For just £10 per month, members are entitled to a range of prizes and, if a season ticket holder, the additional benefit of cash back or a voucher for the ECFC Shop.

The City Foundation draw runs throughout the year, and overall there are sixty-seven prizes – of which sixty-four are cash prizes – all of which means that members have a GREAT chance of winning, all winners are Exeter City supporters and net proceeds go to good causes at the club.

If you want to join then fill in a form at Reception, join online by clicking here, or by contacting the Foundation administrator at Richard.horne@ecfc.co.uk.