Midfielder Archie Collins said it was one of his proudest moments when he led Exeter City out as captain for their FA Cup first round tie with Cambridge United last weekend.

Archie, a graduate of Exeter City’s Academy, had captained sides at youth level before but admitting he was not expecting to deputise for Jake Taylor, who was suspended for the match, as there are a lot more players, with more experience than him, in the dressing room than him.

However, when manager Matt Taylor pulled him aside to tell him the news, he was delighted.

“It was pretty surreal to be honest with you,” he said. “It was very unexpected with all the experienced players we have got in the team, so for Matty (Matt Taylor) to pull me aside and say that I was captain, I was overwhelmed really.

“It is one of my proudest moments, definitely. Leading the boys out was surreal and my family where there to witness it as well so it was a really, really proud moment.”

Archie is one of a number of players to have graduated from Exeter City’s Academy to have been given the captain’s armband. Jordan Moore-Taylor and Dean Moxey have both lead the team out at Exeter City, and other clubs, while Matt Grimes has captained England under-20s and is currently wearing the armband for Swansea City in the Championship. 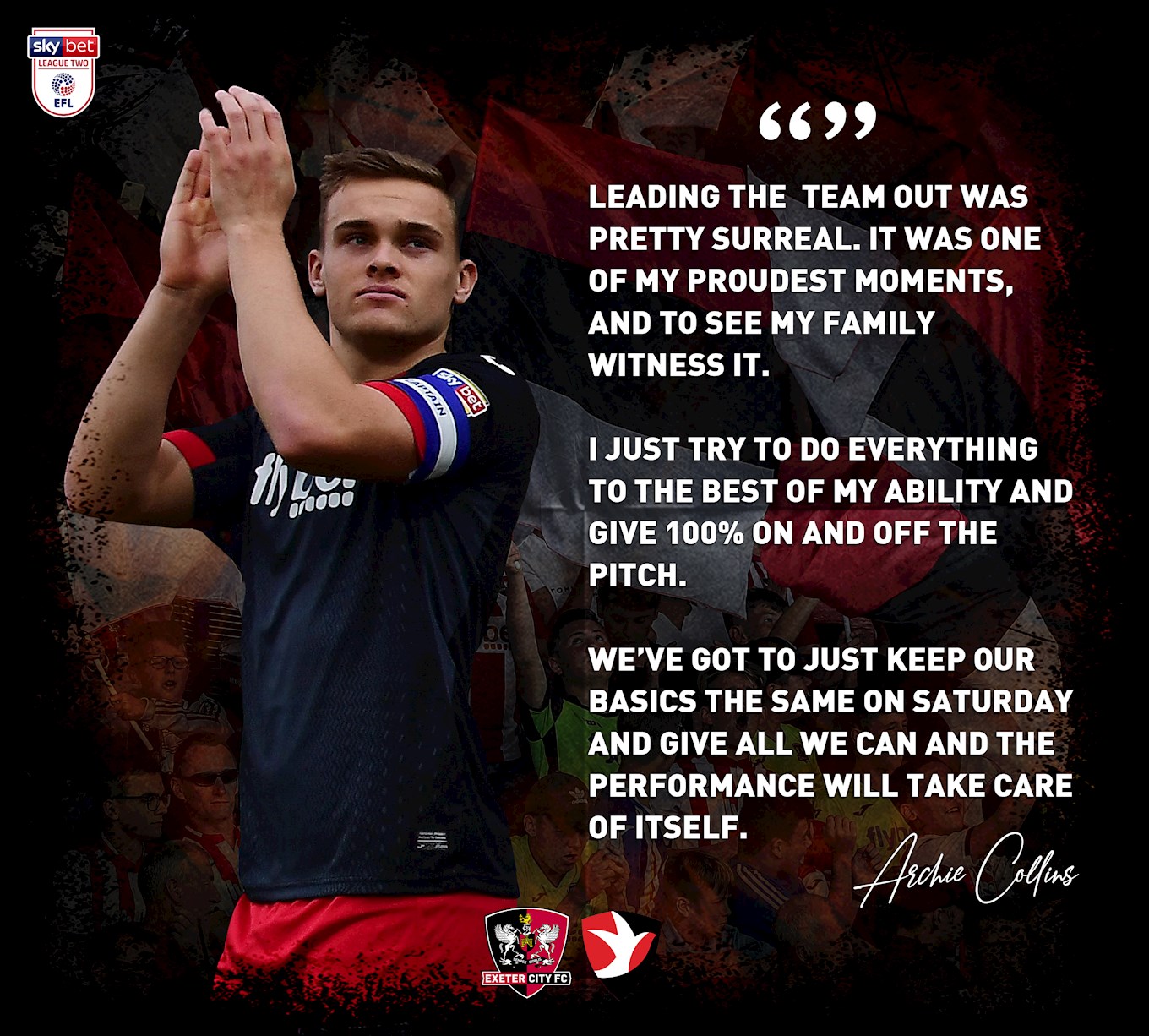 So what does Archie think it is about the academy, and the way they coach, that brings out such good leaders in their players?

“They ground you and they teach you the right way to behave on and off the pitch,” he said. “It becomes a habit and I think that is why this academy produces such good players on and off the pitch. And, all the names you mentioned, they are great senior pros now so if I can follow in their footsteps it will be a real achievement.”

There is a chance, with Jake Taylor still suspended, that Archie could retain the captain’s armband this weekend against Cheltenham Town. Cheltenham come to SJP in good form, but so did Plymouth Argyle and Forest Green Rovers and both those teams left on the back of a defeat – and a heavy one in Argyle’s case.

So what do City have to repeat from those performances to get a result on Saturday?

“I think we just have to keep our basics the same,” said Archie. “Everyone in the dressing room will be raring to go because it is home game against another top side who is up and around there. I think if we get our basics right and give all that we can out on the pitch then the performance should take care of itself and hopefully we get the win and keep climbing the table.”

Exeter City Supporters' Trust is currently running a STARS campaing to raise money for Exeter City's Academy. You can find out more about this and how you can donate here