When Jake Taylor is out on the pitch in and Exeter City shirt - which on the basis of his appearances over the past two and a half seasons is a regular occurrence - he is never too far away from a crunching midfield tackle or a squabble with an opponent.

He seems to relish the combative and quarrelsome nature of Sky Bet League Two and, from the outside looking in, he comes across as a spiky individual who would be somewhat difficult to get on with. And yet, nothing could be further from the truth. 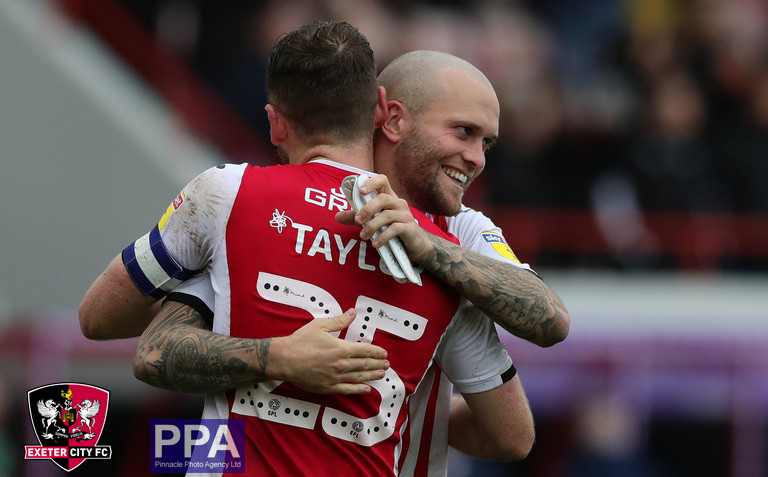 In the dressing room, which is described by many of the City players as one of the closest groups they have worked with in football, Jake is one of the most popular players and that also extends to the terraces where his kind, friendly and approachable nature has made him one of the most-loved captains City have had in recent seasons.

“I am probably two different characters completely on and off the pitch,” smiled Jake, who recently gave a pair of his football boots and a City shirt to an autistic supporter.

“I think being in the centre midfield you are involved in the thick of it, the majority of time, so you have got to have that bit of an edge to you where you want to get one over on the opposition.

“So, I’m not sure how the opposition would look into me, but I would say I am two different characters on and off the pitch, which isn’t a bad thing.” 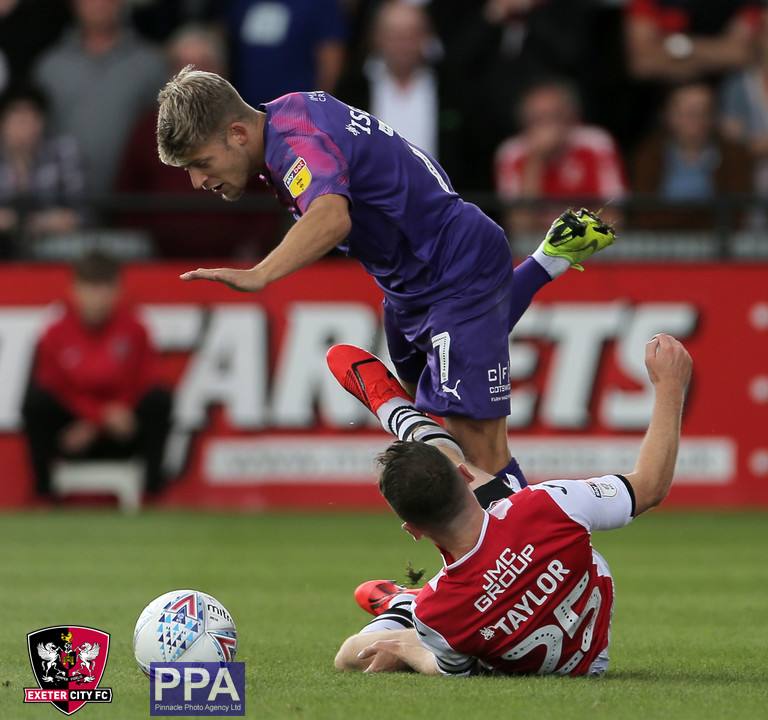 Jake, as captain, seems to grasp the nature of the club perfectly as well. In his weekly column to fans, which appears in the Exeter Express & Echo, he talks about how the community aspect of the club is one of his favourite things about being a Grecian and he feels privileged to be in a position where he can reach out supporters.

Jake also added that being captain of the club for the first time was his proudest moment at Exeter City so far. The 27-year-old Ascot-born midfielder took over the role from Jordan Moore-Taylor in the summer of 2018 and has proven to be a very popular leader with the players.

And his likeable nature is perhaps highlighted by the fact that the likes of Jayden Stockley and Liam McAlinden, who have both left the club since Jake has been captain, still keep in contact with their former skipper. 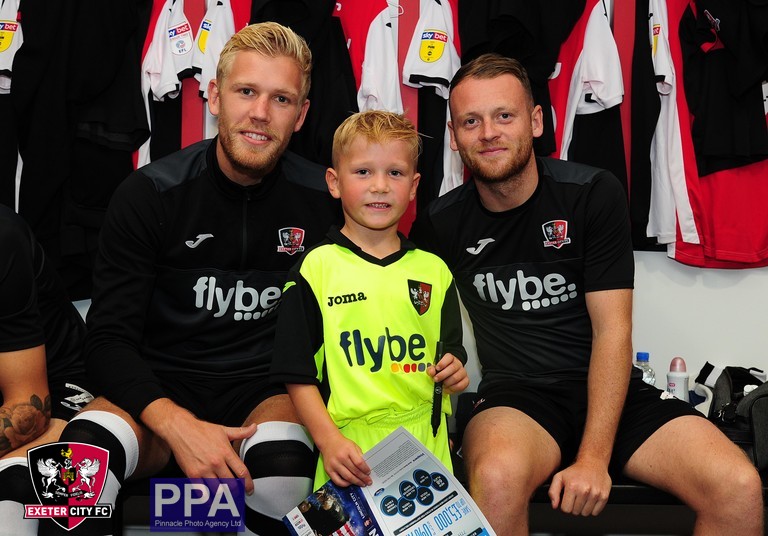 Jayden Stockley and Jake Taylor with an Exeter City mascot

“I message the majority of people I have played with during my time at Exeter,” said Jake. “That is the lovely thing about Exeter, we have made some good friends down here that have gone on to other things.

“I think it has been mentioned before, but I went up to see Jayden (Stockley) the other day and I have seen Liam McAlinden. I could list a number of people with regards to that and that is the good thing.

“We always keep in contact and we always congratulate someone if they have scored goals or if they have won and they do the same for us so it is a nice feeling around this place that is has continued with people even if they have moved onto other things.”

Asked if it pleased him that he was such a well-liked character in the dressing room, Jake modestly answered.

“If it is true, then it is pleasing,” he said. “I enjoy coming into work every day. I enjoy being around the squad and the staff. I enjoy playing a game on a matchday. It is what everyone wants to do, and it is what everyone dreams of doing when they are growing up. 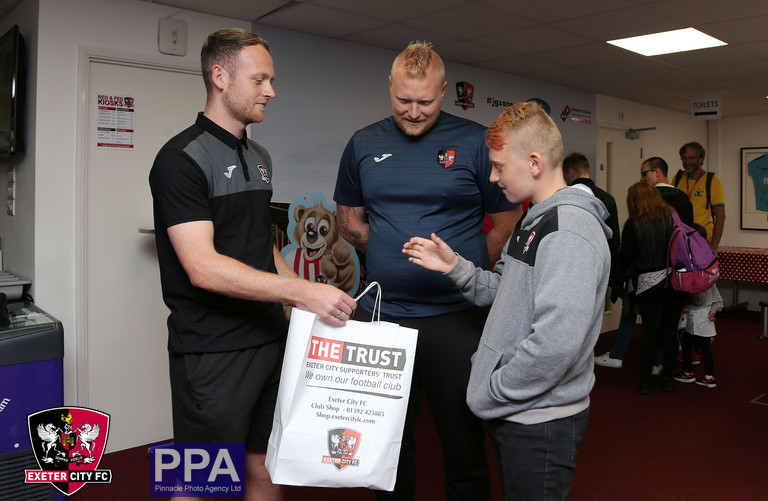 “It is important to enjoy it while it lasts because it won’t go on forever, but while I have been down here I have had a great relationship with all the players and the fans as well and I think that builds something that will be good going forward for everyone.”

It seems like only recently that Jake returned back to City on a permanent basis and scored that goal in a 4-1 away win at Notts County later that campaign, but that was three years, seven months and seven days ago.

“I think as soon as you play a game and finish, you go through clips of that game, but you then put it to one side and your focus is mainly on the next one,” said Jake, when asked if he ever gets chance to reflect and enjoy matches once the season is up and running.

“The good thing about this league is there is always a game just around the corner whether that is this month or around the Christmas period when you have got to recover and repair and focus on the next one. So, although you look at stuff you can improve on, it is important to keep looking forward and keep trying to pick up points in the games that we have got coming up.”

Looking forward is something City have done well so far this season. Despite the disappointment of narrowly missing out on the play-off places last season, the Grecians rolled up their sleeves and went on a 10-game unbeaten run to propel them to the summit of the Sky Bet League Two table by the start of October. 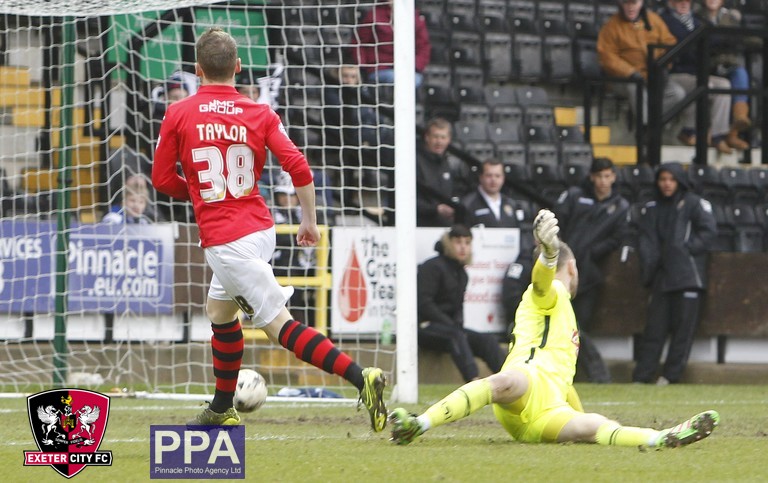 City though were in the same position this time last season, before falling away. However, this campaign there seems to be an increased competition for places and more of sense of optimism that the Jake and his team can mount a more sustained push towards the automatic promotion places.

“I think since I have been here this is definitely one of, if not, the strongest squads we have had,” said Jake. “You can see from the depth of the squad that if someone did get injured that there is a good few people that could step up that have plenty of experience of playing in this league which is important.

“This is a difficult league to play in and I think if you have got experience of playing in this league you sort of know how to win games. The more games you play, it’s not the easier it becomes, because winning a game of football is never as easy as you think it is going to be, but you have more know-how and you know how to see games out as such.”

“I think the strength in the squad is clear to see,” added Jake. “Lewis (Ward), unfortunately, picked up an injury and Jonny (Maxted) has come into the side and done fantastic. 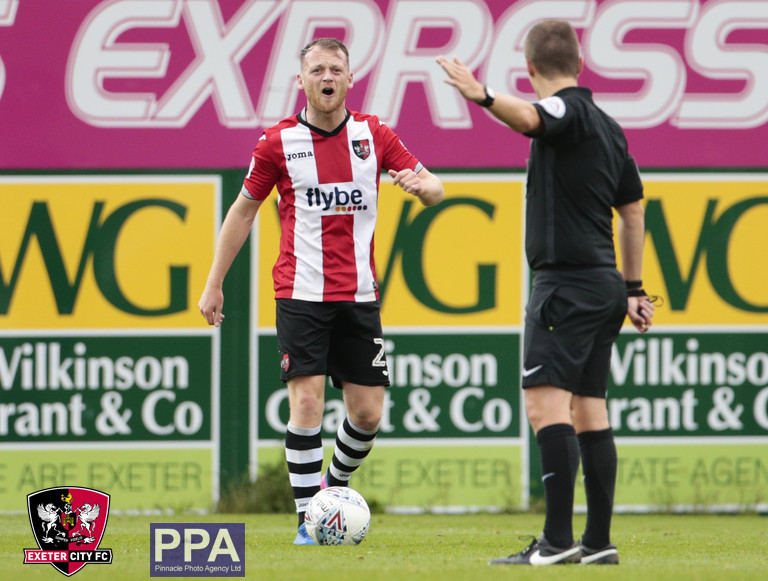 Jake Taylor getting his point across to a referee

“I think it is important not to get too carried away at looking at the league table at this point though.

“It will come down to the last few months of the season and if we are in and around it then that is when we can really start focusing on it, but it is important now to just continue to concentrate on the next game. I know it is a cliché, but the next game is the most important one and if we can keep ticking them off then we will be in a good place.”