Over the past eight weeks there has been a lot of attention focused on the younger faces in the Exeter City squad, and for good reason.

Jack Sparkes, Ben Seymour and Archie Collins have all stood up to the test that League Two throws at you in recent weeks, and while the youngsters have been a bright spark in City’s start to the campaign, there’s no doubt that they’ve been wonderfully assisted by some of the more experienced heads in the dressing room.

In Dean Moxey the Grecians have a defender who knows the club inside out and has turned out some eye-catching displays so far. In Pierce Sweeney they have a player who has embarked on his fourth season as a Grecian, and that’s to go alongside the likes of Jake Taylor and Ryan Bowman who are fantastically experienced.

Summer signing Tom Parkes is also one of those squad members who arrived at St James Park with an impressive cv and a proven track record at this level. A player who has come up against the Grecians a number of times over the course of his career, and also an individual who has tasted promotion from League Two- with Bristol Rovers in 2015/16.

Following his departure from Rovers following their promotion, Tom would make the move to London to link up with Leyton Orient but a tough season there would see him suffer relegation from the Football League as the club suffered from off-field problems.

But Tom’s ability was evident as he then opted to join Carlisle United prior to the start of the 2017/18 season. The Cumbrians often have entertaining and competitive tussles with the Grecians, and Parkes epitomised that in United’s back line as he made 89 appearances over two seasons at Brunton Park.

With the chance of a new challenge and the opportunity to work under Matt Taylor, Tom opted for a move to Devon, something the 27-year-old has taken well to so far.

He explained: “I’m enjoying it here, the boys are good, and I’m enjoying my football at the minute. It’s a nice area, somewhere different for me. I was in Carlisle last year and the weather down here is massively different! I’m enjoying my time down here and hopefully that will continue. 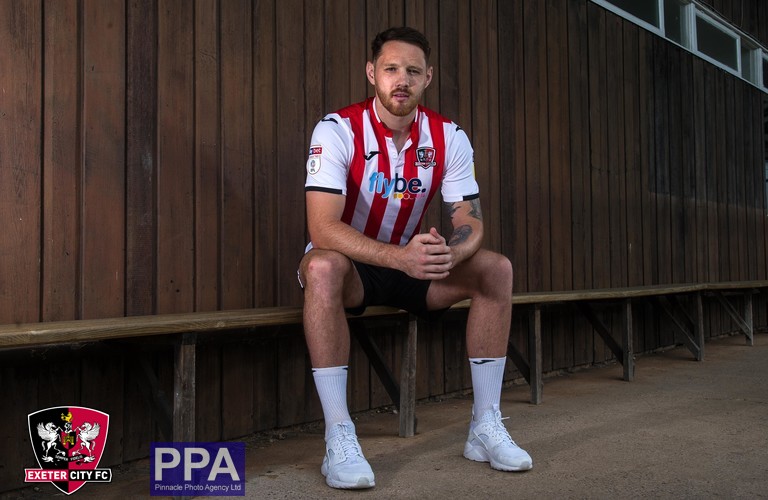 Tom Parkes signed for the Grecians after leaving Carlisle United

“When you look at the facilities that the club has, they’re fantastic. The area is very good, and you have a lot of young players coming through, training with the first team, and making their debuts and I think that’s a good thing. They’ve been good, I’m happy for Ben (Seymour) who made his league debut last week, I think that’s a massive positive and it shows how the club are working with the youngsters to get them into the first team. Jack Sparkes has been fantastic when he’s come in and he’s done a great job.

“When I came down and spoke with Matt to start off with and saw everything like the facilities here. He’s a massive part of me coming down here, he was a centre half himself and he’s helped me massively.”

Tom made his debut on the first match of the season as the Grecians battled to a 1-0 win over Macclesfield, and though he almost got on the scoresheet himself, he and the defence were credited with a clean sheet before they repeated the same score line the following week against Stevenage.

But following the delight of making it six points from six after the match at the Lamex Stadium, news then followed that the defender would face a three-match ban for an off the ball incident with Chris Stokes late in the game. A shadow over what had been a strong start to the season for the defender as he had to sit out for the next few matches.

Reflecting on the ban, Tom admits he was disappointed to miss out on game time but credited the squad for continuing their strong start, and having featured eight times so far, the defender feels he has started life with City in good form.

He continued: “Apart from Stevenage, which was disappointing, I feel like I’ve done okay. I’m enjoying it and the main thing is that the team are getting the results that we need.

“We’ve got a lot of good players in this squad and when you’ve got players pushing you to get into the starting XI then it’s good for you because you’ve got to train even harder and make sure that you’re ready if you do get called upon.”

Tom in action for City against Leyton Orient

Tom also believes that there is a great deal of character and belief in the City dressing room, which has helped them start the season positively- especially with scoring later on in matches.

“If you look at the strength of the squad, you’ve got some really good players here. We’re always fighting until the end; we’re not giving up on anything,” said Tom “You look at the game against Leyton Orient when we were 2-1 behind but we carried on and pushed our way through to get the penalty at the end and draw the game. We always push to the end, but we’ve got to make sure that we give ourselves the best opportunity to go and win a game.

“A lot of the goals have come towards the end of the games but it shows you that we’re never willing to give up, and when you have that in a squad then you will always have a chance to win the game or get something out of it.”

But having made a good start to the season, what’s the key to continuing the positive run? Having tasted promotion from the Conference and League Two, Tom is perhaps a man who has an idea of what’s needed.

He explained: “We’ve got to stay level-headed, at the minute we’re playing well, and we haven’t got to get above ourselves, we’ve got to take each game as it comes and go into them with a positive mindset. When it comes down to it, we have got to do the business and hopefully we’ll get the results that we need.”

If the Grecians are to continue their positive run then there’s no doubt that they’ll need the City fans in full voice between now and the end of the season, and Tom admits he’s been impressed by what he’s seen from them supporters so far.

He continued: “The fans have been brilliant. We scored two late goals against Port Vale, but we had a lot of chances in the game and could have gone in the lead a bit earlier, but the fans got behind us. When the fans are behind you and pushing you, it gives that little bit more momentum to go and win the game.”

Having put the disappointment of a three-match ban behind him, Tom has come in recently to add even more physicality and experience. And having started the past two matches, there’s no doubt that he’ll be eager to keep working hard and hold onto a starting spot moving forwards.