Exeter City captain Jake Taylor says the Grecians will be looking to extend their fine home form as they host Grimsby Town at St James Park this Saturday.

The Grecians are yet to be beaten in the league, and the midfielder wants the team to continue their impressive start to the season, which leaves City at the top of Sky Bet League Two.

“They’ve had a good start to the season, and we know any team in this league is going to be a tough game. So long as we can continue with what we’ve been doing at the beginning part of the season, then we should be able to carry on our good run of form.”

This weekend's game with Grimsby means a return to St James Park which has had a certain feel-good factor this season, with manager Matt Taylor praising the support of the home crowd in recent games. 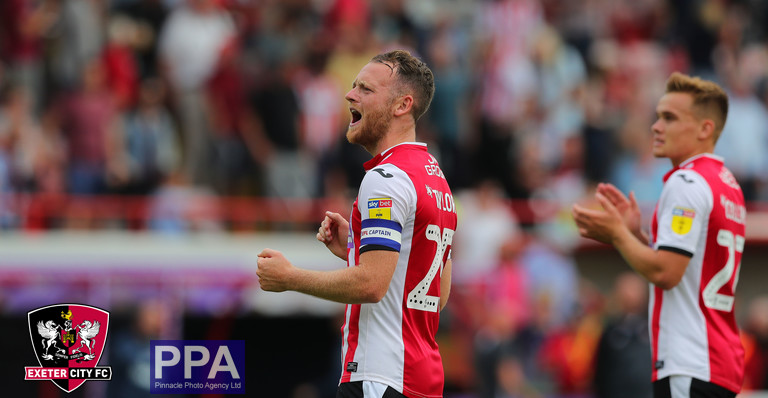 Jake also stressed the importance of a good home record in terms of gaining promotion, and that a home fortress is a key foundation for any successful side.

The midfielder added: “I think that with any team that has been promoted over the last few years, their home form has been one of the strongest things about them. Obviously it’s going to be an important thing for us, so far so good, but there’s lots of football to be played and we are well aware of that. But it is important that our home form is very good throughout the whole of the season.”

New contracts for Jack Sparkes and Ben Seymour were announced this week, and Jake expressed his delight, as captain, to see the impact the young players are having in the first team this season.

“It's been brilliant. They’re a breath of fresh air since they’ve come in. You could see from pre-season that they are going to have good years for us. Sparksy’s come in so far this season and played like he’s been playing for a long time, and Ben has had to be a little more patient, but every time he plays you can see the hunger in him. It’s a good thing for the club to tie them down for a few more years and hopefully see them progress to good things.”