Despite the uncertainty surrounding youth football in the recent months, and the 2019/20 season being cut short because of the COVID-19 pandemic, Exeter City’s under-18s have been back in training and undergone an extremely productive pre-season for the 2020/21 campaign.

Four friendly matches have been played to date, with at least another two exhibitions lined up, all designed to ensure Chad Gribble and his squad are fully up to fitness when their first match of the new Youth Alliance season gets under way.

The under-18s have actually been back into training since July 21, and Gribble explained how the Academy has had to alter their training methods in line with government protocols.

“It has been a funny pre-season," he said. "During the first few weeks, we trained in small groups to begin with, and our exercises were all non-contact. We mostly tried to get the boys back into the rhythm of things after a long break, before we started full training again in August.”

After a week of full-contact football sessions, City’s Under-18s played their first friendly on August 8. Tiverton Town under-18s provided a good run out for the young Grecians, but it was evident that the Grecians had been in training for longer after demonstrating superior fitness and sharpness levels. For Gribble and his coaching staff, it meant that they had a chance to put what they had worked on with the team in training into match practice.

Seven days later, Exeter’s youngsters faced Torquay United under-18s, who provided a much tougher test for the players across the pitch. City played reasonably well and saw a lot of the ball, however, they were unable to take the chances that opened up. The Gulls punished their opponents for being so wasteful and ended up taking home the victory. However, Gribble admitted how pleased he was his players were able to get a good number of minutes in under their belts.

The intensity started to rise for the young Grecians, and their third friendly quickly came around. On August 18, City travelled to Speeds Meadow to play men’s side Cullompton Rangers. City competed well against their much-older counterparts for an hour, and at one stage held a two-goal lead. However, with the intention of giving several players more time out on the pitch, the Exeter boys ran out of steam and conceded late strikes to a team full of know-how and physicality. Gribble though explained how happy he was with his squad’s first 60 minutes, despite some of those members playing men for the first time in their careers. 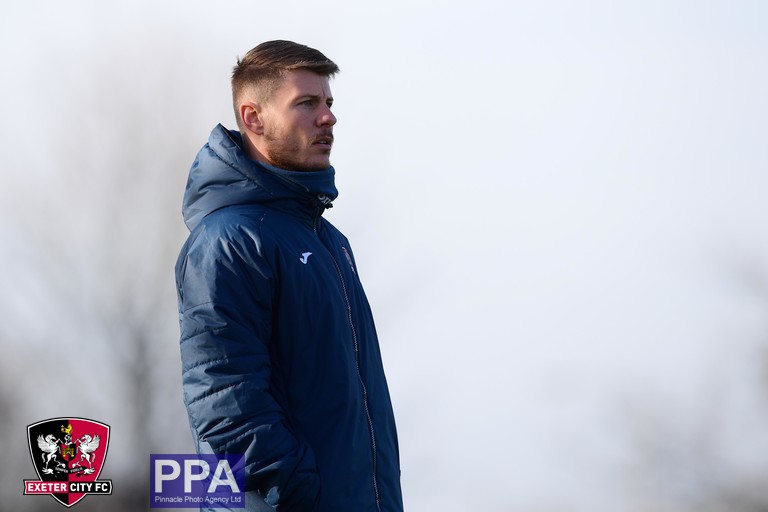 Last Saturday provided Gribble’s players with their most-recent pre-season test, as they took on the newly formed Helston Athletic Under-21s side. Gribble himself selected more of a matchday squad, which led to the team’s most complete performance to date. Despite dominating the ball and creating plenty of chances, the Grecians fell behind, but they did reply with a goal of their own from a set-piece. A late City penalty handed them the win, rewarding the players for how sharp and fit they had looked throughout the 90 minutes.

That performance leaves the Exeter youngsters in a good place going into their next friendly fixture, a tough match with Buckland Athletic on August 28. Gribble’s squad then face a tricky away trip to Luton Town eight days later in what is currently their final exhibition game before the Youth Alliance league begins.

Gribble though has said that overall he feels his players are shaping up well for the new season.

“Pre-season is about getting the players to the required fitness levels to play our style of football. They have worked hard and had it tough, and in some instances, they have probably gone into games a little tired, but it means that when we get to the point of our first match, we will be ready. If they can get through the pain then that will be good for them.

“We are now trying to piece everything together. It doesn’t surprise me that the final product is lacking, but I am delighted with where we are now. It is now all about continuing to develop these players, day by day, game by game. I’ve liked that we have played youth teams, sides made up of different age groups, as well as men. It means we have played a variety of styles, which will provide the boys with good experiences as they continue their footballing journeys.

“I think we are at a stage where all young players at clubs across the country have a great opportunity. With limitations such as salary caps in place, it means clubs may rely on their younger players much more. That will provide a great incentive for the younger players to try and catch the eye of the coaching staff and get opportunities.

“Our aim has always been to try and produce players for the first team, but also to try and get our boys to play football in the Exeter City way. It is an identity we are proud of. Our practices are aligned with the first team and we want to make sure our players are exposed to that.

“We want to go out and challenge the boys every game. We want the players to try and win every single day, in training asking them to work harder and improve. We want to say to them, ‘what individual wins can you achieve today?’ If the boys can achieve those little wins on a daily basis, then that will result in the wins on a Saturday. Our aim is to finish as high as we can in the Youth Alliance league table, but I don’t want to put any unnecessary pressure on the players. The pressure that I want them to be under is to make sure that they are the best player they can be.”