Exeter City manager Matt Taylor says he will be picking a side tomorrow that he expects to be competitive in their Leasing.com Trophy match against Ipswich Town.

The Grecians go into the match on the back of a good run of form that has seen them take eight points from a possible 12 over the Christmas and New Year period. However, the hectic fixture schedule has taken its toll, and on top of the trips to Colchester United on Sunday, December 30, and Forest Green Rovers on New Year’s Day, he says he has to be mindful of not putting players at risk of injury.

“Obviously it plays a big part,” he said. “There are certain rules within the competition that we have got to stand by and whatever team we put out on Saturday we expect it to be competitive but we know we are up against a tough test, because Ipswich are a team of a higher calibre up towards the top end of League One and a big club in lower league football. So, it is going to be tough, buy whatever team we put out there, hopefully they will do us proud.”

A number of young players, who have been out on loan deals with non-league clubs, are expected to come back into the matchday squad. Added to that players on the fringes of the first team are also likely to get some game time. It has been a formula that has proved successful for the Grecians so far this season in the Leasing.com Trophy as they won all their group games and dispatched high-flying League One side Oxford United in the second round.

“Generally, the squad has been strong this season and when people have been called upon, they have performed really well,” said Matt. “In this competition younger players have had the opportunity and they have performed really well hence why we are in the latter stages. It is a competition we want to go as far as we possibly can in, but any games these younger players get, certainly at the Park, against good quality opposition will benefit their progression.”

Asked how much confidence they will take from their performance against Oxford in the last round, Matt added: “A lot, because they are towards the top end of League One and that was a good game of football on the night. Dino (Visser) had the heroics towards the end with his penalty saves, but the younger players and whoever we put out on that pitch on that occasion performed well on that night and, if anything, we might have shaded the 90 minutes against Oxford.

“We learn a lot about our young players in these games, as much as we monitor them when they are out on loan, the real crux of it is playing at the Park and playing good quality opposition and playing alongside the lads they train with every day.”

Matt was also pleased Saturday’s game is at home, due to the reduced travelling, if only for the supporters who have done the miles watching City over the festive period.

“They have been through the mill in terms of the miles they have covered,” he said. “We couldn’t get much further away than Colchester but you have also got to think of the Ipswich fans, I suppose, having to travel that distance but it is part and parcel of where we are in the country. You cannot get away from the travelling. Hopefully we have repaid the efforts our fans have made over the Christmas period – home and away – and hopefully we will do that this weekend as well.” 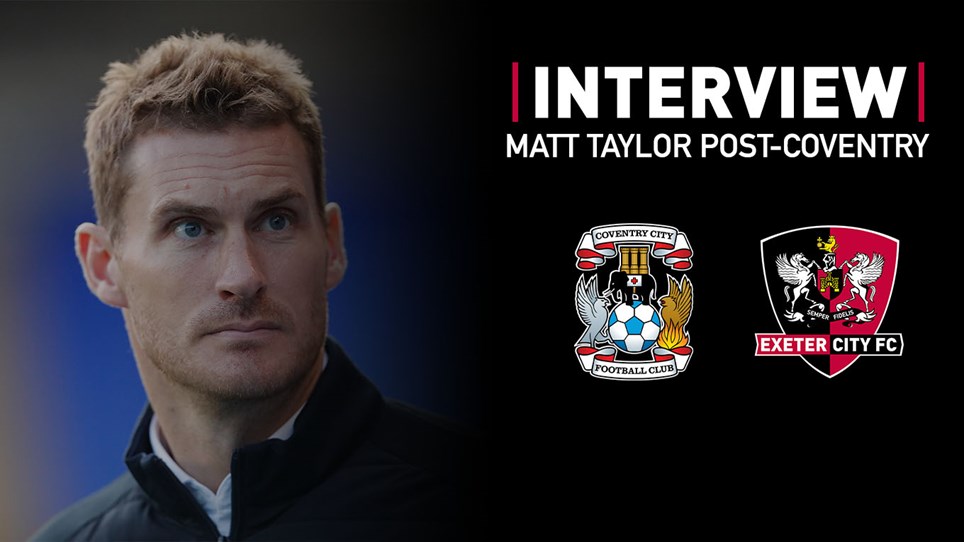 💬 Matt Taylor: “It was a difficult night after five minutes in"


Exeter City manager Matt Taylor believes the 4-1 defeat in the Carabao Cup to Coventry City has given him food for thought after the Grecians exited the competition. 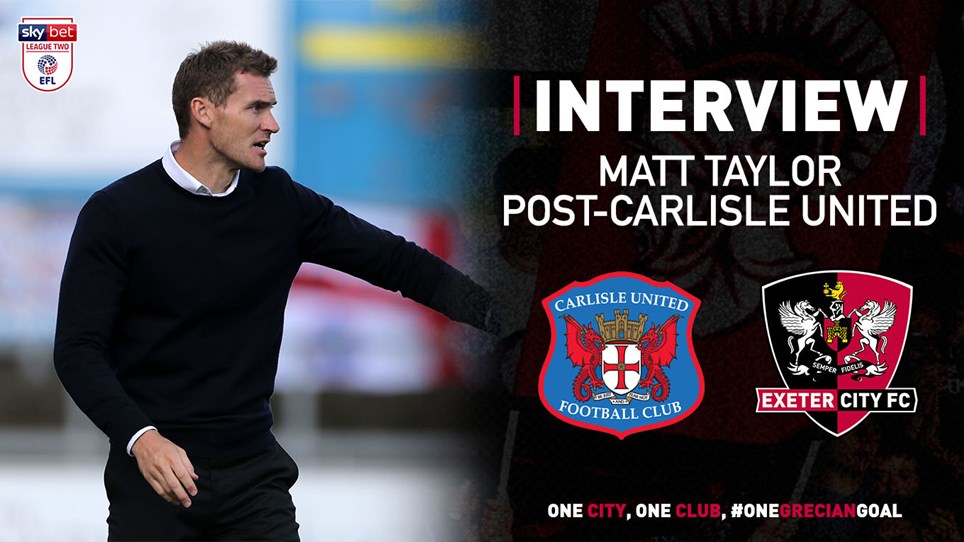 
Exeter City manager Matt Taylor was pleased that his side managed to take all three points away from home at Carlisle United but is looking for his team to be more ruthless in front of goal to take... 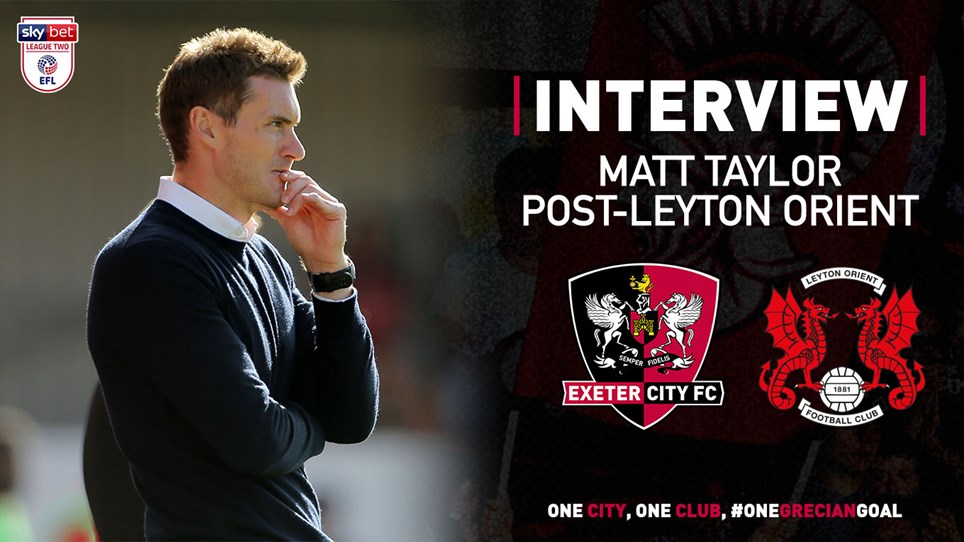 💬 Matt Taylor: "I am bitterly disappointed with the goals we conceded."


Manager Matt Taylor praised the impact of the substitutes as Exeter City came from 2-1 down to grab a late point at home to Leyton Orient. 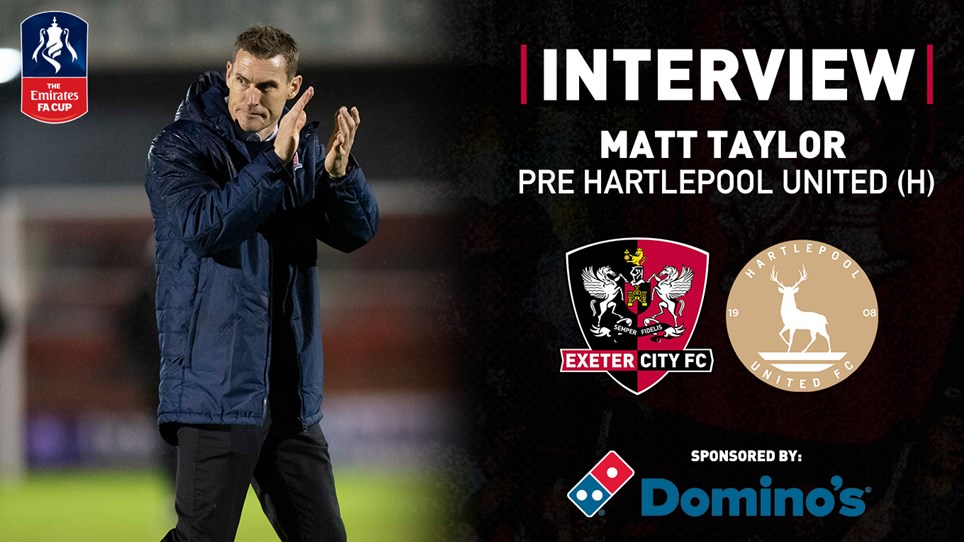 💬 Matt Taylor: "Opportunities like this are huge. The players understand that."


Manager Matt Taylor says his players are aware of the importance of the Emirates FA Cup for Exeter City and will be doing all they can to make it to the third round of the competition.