Exeter City manager Matt Taylor asked for the supporters to stick by him and the team following the Sky Bet play-off final defeat to Northampton Town.

Speaking a few days after the match, in which City lost 4-0, the manager said he understood that fans were upset and angry and said that nobody, including himself, did themselves justice on the day. However, he asked for supporters to recognise that he and the players are hurting, just as the fans are hurting at the moment, and it was important they supported each other.

“We have a group of supporters who have been absolutely fantastic, but we have been to the play-off final three out of the last four seasons now, which is still a huge achievement for a club like Exeter City. 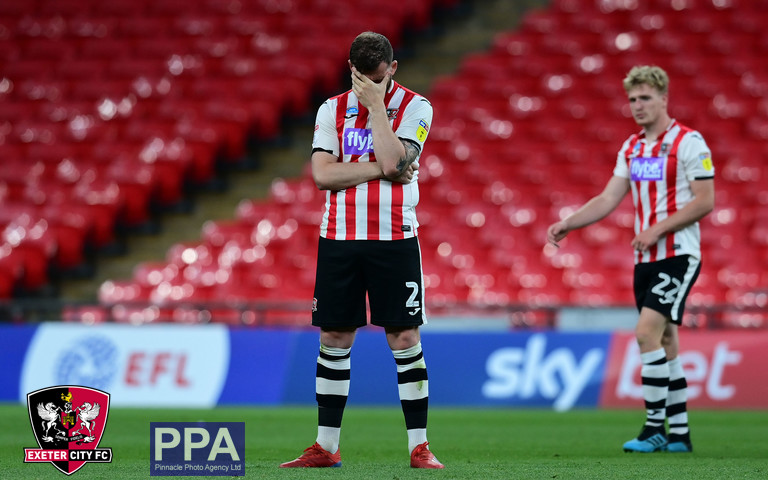 "You look at some of the other clubs in our division who stay around the midtable mark or fight against relegation, but we are constantly challenging towards the top end of the table and that reflects the group of players, the staff and all the effort that goes on behind the scenes.

"Through the stadium staff, the academy staff and my first team staff. We all work for a reason and that is down to the fans. They are our football club. They own our football club and they have a big say in everything that goes on and nobody is hurting more than the fans, but the players are hurting as well.

"So I will ask the fans to be kind to them and to try and understand what they are going through because they have invested in this every day of their lives for the past two years and for it to dismantle the way it did, on the biggest stage possible, was heartbreaking for that group. So, the fans will be rightly disappointed and we can only apologise for the way they feel, but we will do everything we can to keep representing them in the correct manner.”

Speaking about the performance, itself Matt was very frank and honest in his assessment.

“We got overrun from minute one, I’m afraid,” he said. “The physical dominance of Northampton was obvious and there for everyone to see. Unfortunately, we couldn’t handle that side of it and then the game deteriorated off the back of that.

"We had no impact and no influence in that game whatsoever. It certainly wasn’t for the want of trying. I had meetings with the players yesterday. I could see how much they were hurting, but in football if you get close to the top or close to success it is a long way to fall and it hurts even more when you fall a longer distance. We are hurting at the moment. There is no denying that, but you have to look forward to what is next.

“I don’t think anybody did themselves justice on the day, myself included, but that is the way football goes sometimes. There was enough good players out there on the pitch to perform better than we did. We just didn’t have any influence on that game whatsoever and any threat that we did have in small moments wasn’t taken."

In terms of regrouping next season, City have announced that nine players will be leaving the club this summer. However, the manager is confident the group of current under-23 players he has got at the club can fill some of those gaps.

“There is a still a bit of uncertainty, I think it is fair to say, simply, because we don’t know when the fans are coming back through the turnstiles and then the cashflow of the club is, obviously, affected by that,” said Matt. “This is a moment where young players are going to have to step in. We have spoke, a lot about our current group of under-23s. They are an exciting group. "They are not ready, by any means, in terms of being able to throw them all in at once but they will certainly get a bigger opportunity than they have done this season and hopefully they will grow into that responsibility.”

Matt added that in the uncertain times because of the Covid-19 crisis, which has seen a Championship club in Wigan recently enter administration, it was a big plus for Exeter City to be owned by its supporters.

“Wigan could be the first of many,” said Matt. “However, I don’t expect us to be a club in that situation and as angry as the fans will be about our performance on Monday night, I am sure the Wigan fans will be even more angry that they are facing a 12-point deduction and an almost guaranteed relegation this season or next season.

"So we have also got a lot to be thankful for in the way the Supporters’ Trust runs the club in a sensible manner. It might mean that we don’t compete at the very top end of our league, and be exactly where we want to be, but we sure do get the best out of the group of players that we have got and we get the full value out of the majority of the personnel and that is something to be admired and something that hopefully will continue.”