Former Exeter City striker Jayden Stockley talks about his time at the club in an exclusive interview.

The striker, now at Preston North End in the Championship, talked about his early days at Bournemouth under Eddie Howe. He had a number of loan spells from the Cherries, including a successful one at St James Park, which earned him a move to Aberdeen following 10 goals in 21 games for the Grecians.

However, it is his second spell at St James Park where Jayden was the most successful, scoring 25 goals in 48 games as City reached the Sky Bet League Two play-off final. He scored the first goal in the play-off semi-final against Lincoln City, something which he remembers well. 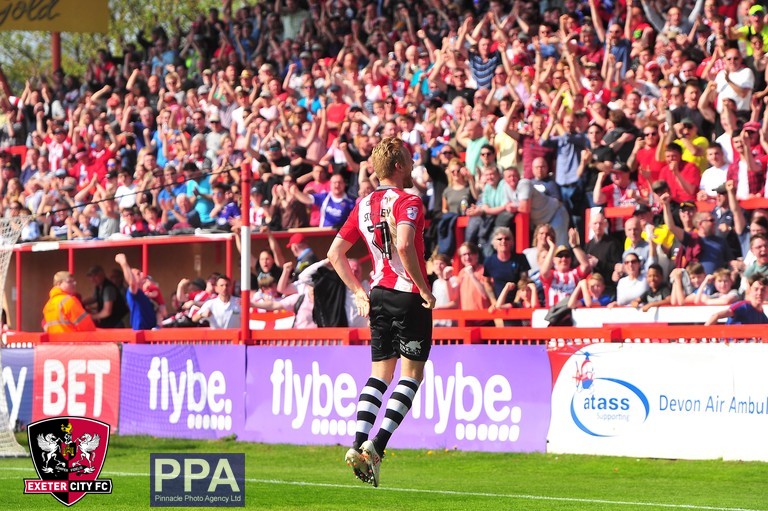 “That goal was huge because it was so tense before," he said. "It was probably the most important goal I have scored to date."

However, it was not the best goal of the match, despite being a stunning volley from inside the box, as the effort was overshadowed by goals from Hiram Boateng and Ryan Harley.

“I couldn’t believe it," he laughed. "I scored the worse goal of the night. Hiram’s goal was a joke. He just plucked it out of the sky and the rest was ridicuolous and then Ryan (Harley) showed the audacity to half volley it as cleanly as possible from miles out. He could do that though, he could strike it as true as possible.”

Jayden's goal against Lincoln was also in front of the Thatchers' Big Bank, and he know has pictures of the goal celebration up in his home. Touching on the importance of the Big Bank and the City fans he said:

“The Big Bank looks formidable there behind the goal," he said. The noise they make is incredible. The numbers aren’t massive, like you get at other clubs, but just the feeling you get from that as a player, it is what you want.

"I have got so much respect for those fans because they have got so much patience. They are willing to wait for you to come into form, they don’t write you off instantly. They take their time to assess the player you are. They just seem to get it.”