Exeter City manager Matt Taylor said the players have already been working hard towards a play-off semi-final tie ahead of today’s announcement that Sky Bet League Two’s current season will be curtailed.

The decision to curtail the season, which was agreed at an EFL meeting today, will see City enter the play-offs having finished fifth in the table on a non-weighted points-per-game basis. Our opponents will be Colchester United, who finished sixth on that basis, and while the news was only confirmed today Matt admitted he and the players had known for some time.

“It is a strange day because obviously the confirmation has come through that the league has been cancelled and we are in the play-offs but, in all honesty, we have known that for a little while now,” he said.

“The players have been back in training since the start of June. They have had an off-season programme that was tapered towards a return to the training at the start of June. So, it is now official, but we have known for a number of weeks now what the guidance from the EFL was and what the outcome was going to be.

“And it was always going to be play-offs for ourselves. We are bitterly disappointed to miss out on an opportunity of automatic promotion. We have been in fantastic form this season and been in the top three for the majority of the season, so to fall out in the last couple of weeks, with regards to the points-per-game system that they are going to use, is disappointing but we have got get over that disappointment and concentrate on the play-offs.”

Talking about a the match up against Colchester, Matt added: “There is nothing between the teams, really. We played them over the Christmas period and then early on in January and they were both tight affairs. It will be two good teams, who develop their players and promote their young players. So, I have a lot of admiration for Colchester. I have said that in the past. However, our focus is on ourselves. We can only control what we can control and that is; how fit we are, in the short space of time, how well prepared we are and how well we play on the day.”

Matt also added that he thinks fitness will be one of the key factors in the play-offs and he is happy with the strength of his squad.

“In terms of fit and able bodies we feel we have got enough,” he said. “We have never got the right amount and as a manager you always want every single member of your squad full fit.

“We have said along to our players that if it is the play-offs that we come back to, then we have got to be the fittest team within that play-offs. 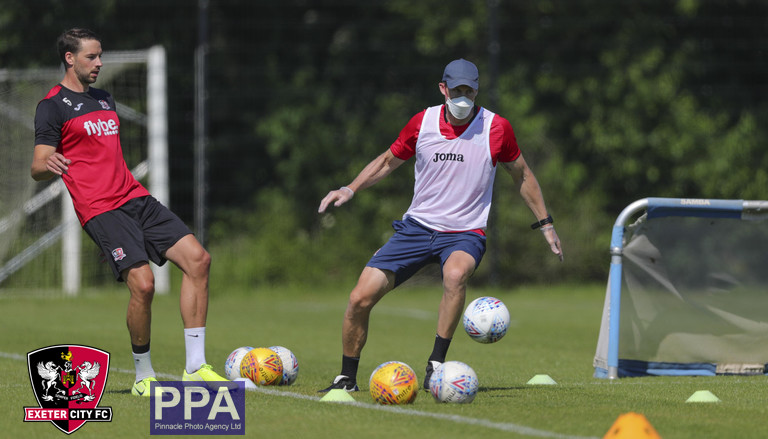 “I’m sure the other three managers will be saying the same thing, but we feel we have been as professional as we can. The players have been working hard on their own and when they came together, we have worked them as hard as we possible could. In the last few days and, certainly the rest of this week, there will be more game-based activities.

“Where we are trying to replicate what we will face against Colchester and then it will be the lead up to a normal fixture. It is not a normal fixture because it is play-off match and the circumstances around it are totally different, but we have to treat it like that. The players have to feel relaxed to a certain extent knowing that they are in their normal routine in the matchday environment. Play-offs is a time where you need to enjoy your football, but you will enjoy it a lot more if you are successful.” 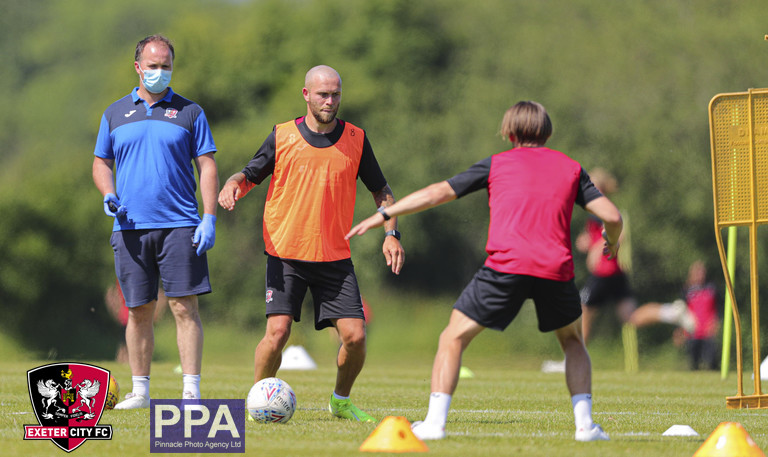 Matt also thanked the fans for their genouristy. They have donated more than £16,000 to the club in unwanted season ticket and Plymouth Argyle away ticket refunds in recent weeks. He said the players want to be successful for them and themselves and warned fans to keep safe during the current Covid-19 crisis.

“The donations, underline what our club is about,” he said. “The generosity of our fans is not matched anywhere else in the whole world let alone the lower league football in England. It is absolutely incredible and gestures like that go an absolutely long way.

“We know what we are in the middle of in terms of the pandemic and the financial restraints that is going to have on the club in the future. We want to play in front of our fans. You want to play the big games in front of your fans. We want to be successful for ourselves but for the fans as well.

“I would advise them as best we possible can to act in the right manner. Watch games at home, keep doing what they need to do in terms of their safety and the guidelines from the government. We are far from through this pandemic and I think people have seen the numbers in the south west are worrying at the moment.

“So, behaving in the right manner is absolutely key but the generosity that has been shown is incredible and the finances do help. It shows what we are as a football club but are fans have done it time and time again and I’m sure they will in the future.”