Exeter City's Academy has an excellent reputation for producing footballers, with the likes of Ethan Ampadu, Ollie Watkins and Matt Grimes catching the headlines in recent years.

It seems, during Supporters' Trust ownership, that the Academy has and continues to produce talented players, and well-rounded young men, who given the opportunity to impress in the Exeter City first manage to impress.

However, we want to know who you the fans would pick to line-up as an all Exeter City Academy XI in a 4-4-2 formation. From the choices below pick your favourite goalkeeper, four favourite defenders and midfielders and then two of the best attackers and we will announce the results!

Voting is open until 5pm on Friday, March 20, we will then reveal the team on Monday!

Christy Pym: Now receiving rave reviews between the sticks at Peterborough United, Christy graduated from the academy in 2013 and made his debut a year later in a 3-2 win away at Southend. A confident shot stopper, Christy would go onto make more than 150 appearances for the club and pick up the player of the season award in his final campaign with the Grecians.

James Hamon: A popular figure in the Exeter City dressing room, James joined Exeter City late in his youth career from Guernsey but spent some time with the club's academy before graduating into the first team. He played nearly 50 games for the club before joining non-league Truro City.

Martin Rice: Born in Exeter, Martin is probably best remembered for his heriocs in the penalty shootout victory over Oxford United in the 2007 Conference play-off semi-final. He played well over 50 games for City before moving to Torquay United.

Jordan Moore-Taylor: Making his debut in a 3-0 win over Burton Albion on September 1, 2012, Jordan was a tough centre back to play against. Physical strong with the ball at his feet as much as he was leaping for a high ball in the air. His first full season as captain of the club saw him marshall a defence that kept 14 clean sheets on their way to the League Two play-off final.

Jordan Storey: Jordan, like many of the academy graduates, got his opportunity in the first team due to an injury-crisis at centre-half. He made his full debut away at table-topping Luton Town in February 2018. Fifteen games, two goals and four months later he was turning out for City in the League Two play-off final before moving onto Championship side Preston North End that summer.

Dean Moxey: Dean is one of the academy's most successful players. He scored the goal that set up the tie with Manchester United in the FA Cup in 2005 and achieved back-to-back promotions with the Grecians before leaving to join Derby County and then get promoted to the Premier League with Crystal Palace. Now back at SJP, Dean has returned to his hometown club and is intent on getting us back to League One.

Danny Seaborne: The player who lifted the Conference Play-Off Trophy in 2008, captain Danny formed a strong defensive partnership with Matt Taylor during that promotion winning campaign. He then helped the club to back-to-back promotions and played 23 games for the club in Sky Bet League One before joining Southampton. The Barnstaple-born defender would return to the club in the final days of his career before joining Derry City.

Ethan Ampadu: He was Exeter City's youngest ever player, until that record was taken from him this season by another emerging talent in Ben Chrisene. Ethan's debut was impressive - a stunning performance at centre-back as the Grecians kept Championship side Brentford at bay for 120 minutes to win a first round League Cup tie. Ethan, combining his GCSE studies with playing first team football, would feature another 12 times for the club that season before joining Chelsea.

George Friend: George was a key part of the side that gained promotion back to the Football League in 2007/08 and acheived back to back promotions with the club. During his time at St James Park he became the youngest player to captain the club. He has since gone on to have great success as captain of Middlesbrough leading them to the Premier League as skipper.

Scot Bennett: Cornish-born Scot was an adapatle member of Paul Tisdale's squad during his time at City. He could play centre-back, centre midfield or up front. After making his debut in Macrh 2011, his first goal came the following season when the Grecians beat Tranmere Rovers 3-0 at St James Park and he went on to find the net a further two times during that campaign. He also scored a memorable goal in a 3-1 win over Plymouth Argyle at SJP.

Jack Sparkes: At the age of 16, Jack almost scored a wonder goal on his debut against Swindon Town in August 2017. He has since gone onto establish himself as a regular in the Exeter City first team and was receiving good reviews at left wing back this season before a knee injury ended his campaing early.

Archie Collins: Archie, now a regular in the City first team, made his league debut in September 2018, in a 3-1 win against Cheltenham. His first league goal - a wonder strike from 25 yards - came in a 2-0 win over Swindon Town a few months later. He has since captained the City first team this season.

Matt Grimes: Sold for £1.75m to Swansea City in January 2015, Matt burst onto the scene in August 2013 picking up the man-of-the-match award at City beat AFC Wimbledon 2-0 at St James Park on his debut. Calm an confident in possesion, Matt would win rave reviews in the City midfield, earning a call up to the England Under-20s squad, and attracting the interest of a number of top flight clubs before signing for the Swans - where he is currently the club captain.

Liam Sercombe: A midfielder with an eye for a goal against Plymouth Argyle, even after leaving SJP, Liam is well and truly a fans' favourite at Exeter City. He made his debut in a 4-1 win over Altrincham on the opening day of the 2007/08 season and went on to represent the club with great distinction over the following eight years before leaving for Oxford United in 2015.

Matt Jay: Much-loved by the Exeter City faithful, the Thatchers' Big Bank erupted when he scored his first goal at SJP in a 3-0 win over Colchester United last season. Skillfull on the ball, Matt bagged four goals in 24 appearances last season and has bagged eight in 22 this campaign.

Elliott Frear: Elliott made his debut against Walsall in a cup match against 2011 and opened his account in the replay. He joined Salsibury City on loan in October 2012 before making a permanent move there at the end of the season. He then signed for Forest Green Rovers, joined Scottish Premiership club Motherwell, before returning to Rovers in 2019.

Joel Randall: Joel made his first-team debut in November 2017 during the Grecians EFL Trophy tie against Chelsea under-21s. Blessed with pace and trickery, he scored his first goal for the club this season in a 3-1 victory over West Ham United under-21s in the Leasing.com Trophy and made a breakthrough into the first team for League Two matches based on his performances in that competition.

Sean Goss: Although he never represented Exeter City's first team, Sean played for the Grecians Academy up until the age of 16 before he was picked up by Manchester United. He played in a number of pre-season matches for the Red Devils, and at one point was tipped as a potential replacement for Michael Carrick in the Old Trafford midfield. However, he didn't break into the first team there and joined QPR, had loan spells at Rangers and St Johnstone, before signing for Shrewsbury where he has made 31 appearances this season.

Ollie Watkins: Currently the top scorer in the Sky Bet Championship with Brentford, Ollie scored on his debut against Coventry in 2014. He is the club's record sale - at £1.8m - and won the EFL 2016/17 young player of the year award while playing for the Grecians. And, of course, who can forget that last minute winning goal against Plymouth Argyle in April 2016. Enough to get him the vote to start up front in this team alone, surely?

Tom Nichols: Tom made his debut against Sheffield Wednesday on the final day of the 2010/11 season. However, he didn't establish himself as a first team regular until the 2013/14 season with six goals in 29 appearances. The following campaign he finished as the club's top scorer with 15 and then netted against Liverpool in a man-of-the-match FA Cup third round performance in January 2015.

Ben Seymour: Ben made his first-team debut this season against Coventry City in the League Cup. He made his League debut just over a month later and won a penalty, that was converted by Nicky Law, to rescue a point for the Grecians and keep us top of the league. Had an impressive scoring record while out on loan at Bideford earlier in his career, where he netted 21 goals in 33 games.

Jay Stansfield: Another player who didn't actually graduate to the Exeter City first team. However, Jay, son of Exeter City legend Adam Stansfield, is winning rave reviews at Fulham having joined them from Exeter City's Academy. He has made his Football League debut and played in an FA Cup match at Craven Cottage this season.

Jamie Reid: Scored twice on his full debut away at AFC Wimbledon in April 2013, Jamie was called up to the Northern Ireland under-21s squad while playing for the Grecians. He spent six years as part of the first team squad at City before joining Torquay United where he has netted 19 goals in 35 appearances this campaign.

Voting is open until 5pm on Friday, March 20, we will then reveal the team on Monday! 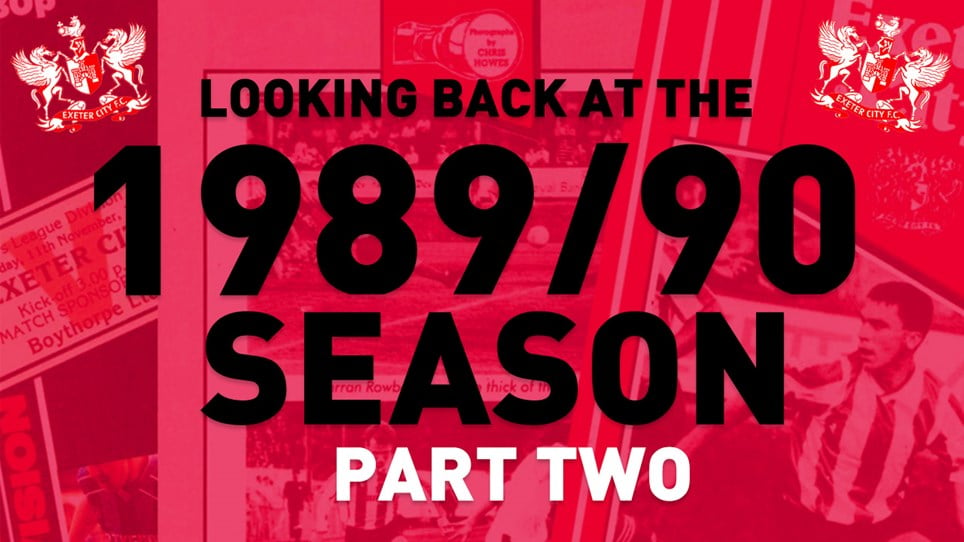 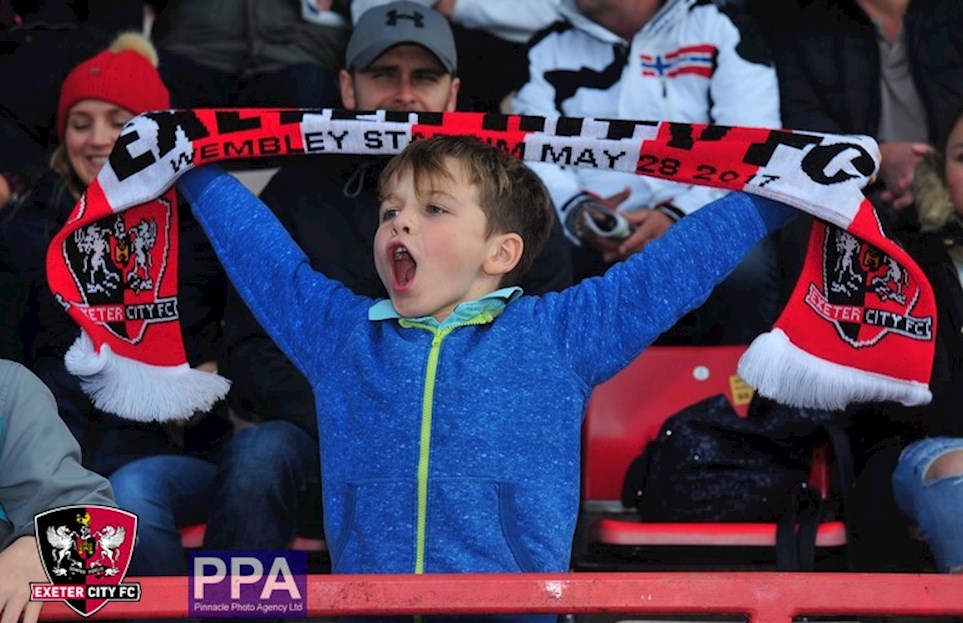