The winner of September’s BIG monthly Foundation prize of £1,000 is Patrick Wood.

Patrick has supported City all his life - despite living virtually all that time in deepest Essex.

Patrick also has most generously donated his winnings to the club - there will be more news shortly about Foundation-sponsored projects at St James Park.

Speaking about following the Grecians, Patrick said: “Although I was born in Crediton I have lived all but the first year of my life in the Witham, Essex area. My first City game was watching the Reserves who were playing in sky blue kit away at Chelmsford near to where I was at school. That was in 1957ish. All my friends supported Chelmsford. Needless to say, Exeter lost that one. 2-0 I think.The first 'first team' game I saw was Colchester away in 1997.

"I saw a newspaper article about Exeter City and the then manager Peter Fox about the difficulties of running a football club and I decided I would go along to the game the following Saturday, resulting in a 0-2 victory for City. From then on I was a City regular, even a season ticket holder for a few years.

"My most memorable match I think was December 2006 an awkward game away at St Albans. City one up and the rain came down as I have never seen before or since. The ball kept stopping unexpectedly in puddles and we were all thinking this game is going to be stopped. Inevitably St Albans equalise with the rain still hammering down.

"City had attack after attack and St Albans were always looking dangerous on the break. In the 88th minute a City shot is parried and the ball rolls agonisingly  across the St Albans goal. Up steps Dean Moxey to volley home from a good foot out! We were so wet, cold and happy and the song went up ‘We only sing when were drowning’.  Isn’t it amazing how many times Moxey has been there when most needed. Also, although frustrating for most of the game there was only ever total support from the City faithfull. Happy days.” 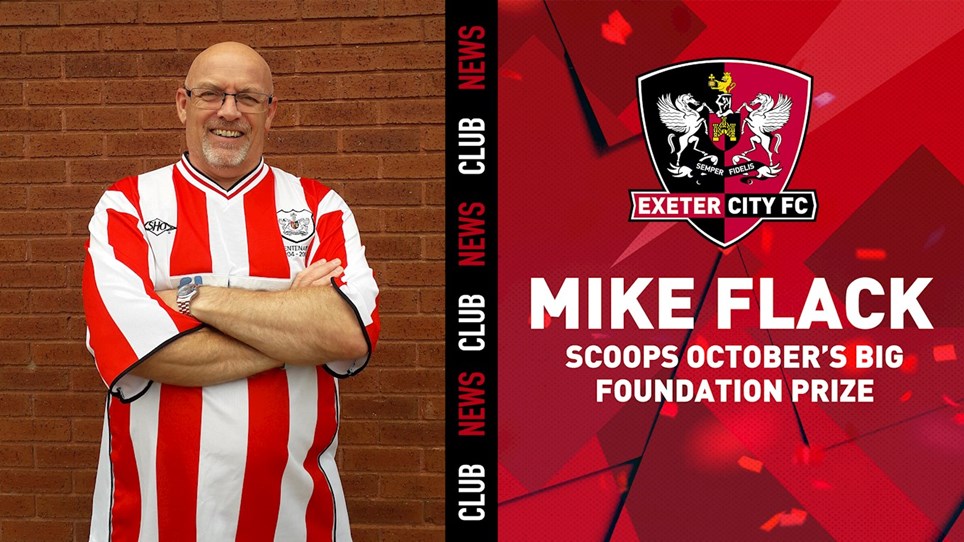 
October’s winner the the Exeter City Foundation’s BIG prize of £1,000 was a man with a City-legend name, Mike Flack.


The winner of August's BIG Foundation prize was Michael Gardner, who pockets a cool £1,000 as a result of his Foundation membership - not a bad return for the £10 per-month.


Exeter City are in midweek action this week as they face in-form Crawley Town in a 7pm kick-off at St James Park on Tuesday night.


Crawley Town will be the latest visitors to St James Park on Tuesday night, so we travel back to we 2015/16 season, when three goals of the highest quality meant the game finished all square.