All four of City’s goals came in the first half as a Matt Jay brace, Tim Dieng’s first Grecian goal and Harry Kite’s brilliant first League goal capped off a wonderful 45 minutes for Exeter.

Sam Finley’s wonder strike in the second half prove little solace for the visitors who travel back up the M5 empty handed.

Both sides had multiple opportunities to bolster the score line further with Matt Jay, Josh Key and Sam Nombe all coming closest to adding icing to an already topped City cake.

Between the Exeter sticks, Cameron Dawson was kept busy by Sam Coutts and Brandon Hanlan but a blistering first half performance from the Grecians meant the damage was done early.

Matt Taylor kept with the same eleven who started in midweek against Barrow. Sam Nombe returned after a spell out and new Bristol City loanee Owura Edwards took his place on the bench.

The early City pressure told and within three minutes the Captain had found the treasure against the Pirates.

A poorly misjudged header by Jack Baldwin put Padraig Amond in behind. The chance looked to have hade evaded him as he shot from an acute angle. James Belshaw couldn’t hold the Irishman’s effort and the ball fell on a plate for Matt Jay to stroke home, for the Grecians first goal of the season.

City were free flowing in the opening exchanges and found themselves goal side of the Rovers’ defence on a couple of occasions. Cam Dawson stayed alert after Harry Andersons’ deflected effort looped precariously toward goal. 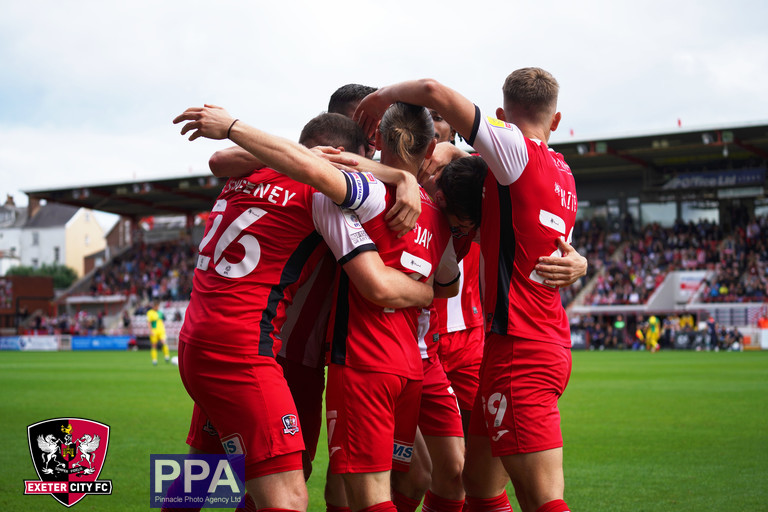 The Grecians found themselves two-up on the quarter hour mark. Excellent one touch passing on the right-hand side opened space up for Josh Key to deliver. A glorious, sumptuous touch from that man again MJ flew into the back of Belshaw’s net.

Podge Amond almost added a third straight after. Some more questionable defending from the visitors allowed the striker through on goal, but his shot dragged just wide of the right-hand post.

Rovers were desperately close to grabbing a foothold in the game. Sam Finley’s low cross evaded Harry Anderson in the middle, and straight up the other end City made it three!

Jake Caprice and Jevani Brown were on the same wavelength on the left and the latter’s whipped ball gifted Tim Dieng an unmissable header in the middle. Gorgeous football.

Goals are like busses and Exeter were FOUR-NIL up before 25 minutes were clocked! Harry Kite this time got in on the first-half rout.

Keeping the ball on the deck, the City frontline passed their way across the Rovers’ box. Brown picked out Kitey on the edge of the box and the centre-midfielder pulled out an absolute peach with a wonderful side-foot effort. Simply breath-taking strike from the Academy graduate scoring his first League goal in the process. 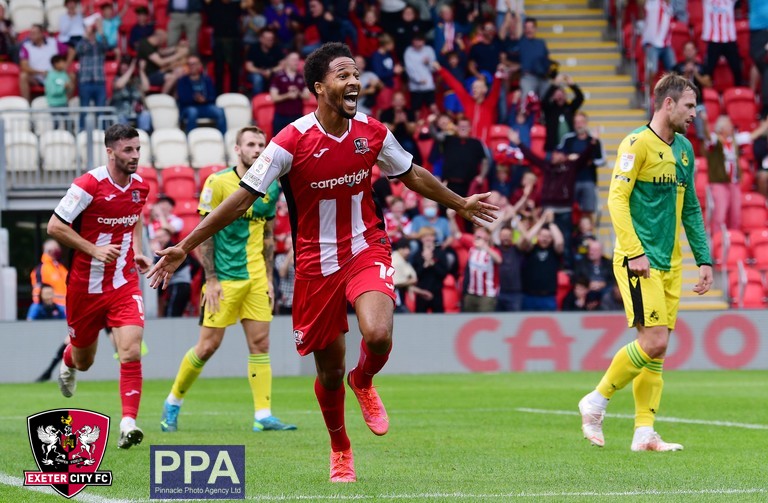 Matt Jay had a great chance to make it five and complete his hat-trick. Amond again linking with Brown. The captain arrived late to Amond’s low pass but only put his shot into St James Road.

Soon after, Podge almost got his opening City goal. This time Caprice delivered into the middle, but Amond’s header was straight at the relived Gas keeper.

Bristol Rovers mustered some energy and offered minor threat to Dawson’s goal. Anderson could only fire over from range. On the stroke of half-time the City keeper was called into action again, getting down well to Paul Coutts’ well struck shot.

Exeter looked to keep up the momentum after the break. Matt Jay fortuitously found himself on the end of a scuffed Jevani Brown shot only to be denied by a smart Belshaw stop and Jake Caprice launched over from the resulting corner.

Josh Key was inches from worrying the goal of the season contenders already. His Messi-esque mazy run breezed past half of the Rovers team before his left-footed effort shaved the post on the way wide.

The ever-impressive Cameron Dawson was on hand, well on-foot, to stop Brandon Hanlan from close range as Rovers grew back into the game and with their tails up, the Bristolian’s picked out the goal of the game.

Sam Finley found space on the edge with twenty minutes left and picked out the postage stamp much to the relief of the 1051 travelling Gasheads.

Sam Nombe almost capped his return with a goal. Key again dancing through the Rovers defence before playing it square to the striker. Nombe’s touch though gave the keeper time to close down the chance.

Exeter calmly saw out the final exchanges to earn the first win of the 2021/22 campaign. Hoping to get ahead of steam, City travel to Harrogate in the league on Saturday but not before a Papa John’s Trophy clash with Chelsea U21’s.