Ahead of the festive period, we look back on some classic Christmas encounters of the past as we flashback to some memorable holiday season matches.

The first sleigh trip down memory lane comes a staggering ten years ago, to one of the most complete performances in Paul Tisdale's tenure as City boss.

Santa delivered superb goals from Jamie Cureton, Scott Golbourne and John O’Flynn. Though the Elves conjured up a stunner from Sercombe, in a five-star performance from the Grecians.

With a white Christmas upon us, the impressive work of volunteers and the ground staff made this historic day possible- after snow had blanketed the pitch the night before.

Over five-and- half-thousand fans braved the weather with an impressive turnout from Wednesdayites too, not knowing of the long journey home come five o’clock. Wrapped up warm with Bovrils in hand, little did they know the afternoon they were going to have.

Exeter were in inconsistent form and came into the game off the back of a 2-0 defeat to Plymouth. The ever-fashionable Tisdale made three changes reinstating Steve Tulley, Ryan Harley, and Billy Jones to the line-up. Clinton Morrison started for the Owls.

The away side nearly took the lead in the opening exchanges. Jermaine Johnson turned too easily and fired a shot towards Artur Krysiak's goal. The effort though pulled agonisingly wide for the striker.

Jamie Cureton was getting a little bit of joy in and around the Wednesday danger zone and on 29 minutes got his reward.

Ryan Harley found space on the right-hand side. Harley danced to the by-line and pulled the ball back. Only half cleared, the ball dropped to Richard Duffy who laid it on a plate for Cureton to smash City in front.

The lead only lasted a couple of minutes. Clinton Morrison turned on the edge of the box and forced a smart save out of Krysiak. From the resulting corner Tommy Miller was met unmarked and headered the ball towards goal. Despite Harley’s clearance the referee deemed the ball over the line.

Cureton almost doubled his tally before half time. Brilliant play from Richard Logan backheeled Scott Golbourne on the overlap. The wingers cross somehow wasn’t converted by Cureton at the back stick.

Liam Sercombe also went close when his left foot effort nestled on the top of the net, rather than in it.

But Sercombe would profit in the second half in exemplary style. Billy Jones looped a ball into the Wednesday box. The half-cleared headed fell nicely from Sercombe. The City academy graduate chested and volleyed the ball beyond Nicky Weaver from 25 yards- for one of the goals of the season. 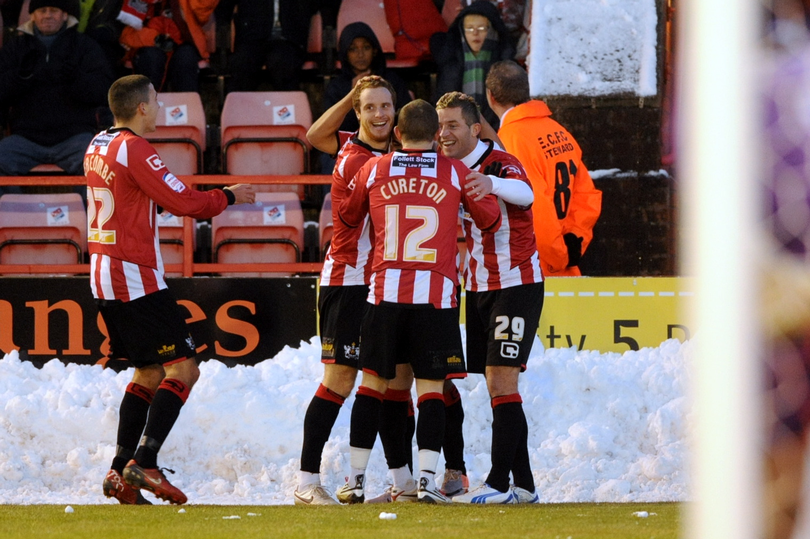 The rout was well and truly under way. Just three minutes after Sercombe’s effort, Scott Golbourne got in on the act, volleying home from the edge of the six yard-box this time. 3-1 Exeter.

Cureton made it four in typical fashion on 72 minutes. Golbourne pierced the Wednesday back line with a delightful through ball to the 35-year-old, who had the simple task of guiding the ball goalward. This was goal 10 of 20 for the season for the veteran.

The fifth was just as technically brilliant as the others. With two minutes left, Cureton still full of running, whipped a ball across the Owls box. Substitute John O’Flynn controlled the ball with his chest and expertly dispatched it into the far corner to complete a famous victory.

Mixed emotions for both come May. City finished in their highest ever league position but Wednesday finished in one of their lowest.