Our next featured game in our Christmas Cracker series is a classic Devon derby from 2013/14.

City travelled to Plainmoor to take on Torquay United in December 2013, where goals from Tom Nichols, David Wheeler and Alan Gow secured the festive bragging rights.

In a memorable season for Devon fans, all three clubs from the shire were all present in League Two this season. Going into this game, City were above both and the Gulls were hovering precariously over the relegation zone.

Paul Tisdale offered one change from the defeat to Cheltenham on Boxing Day with Sam parkin returning to the side ahead of Matt Grimes, though Grimsey would only wait 16 mins to come on for the injured Matt Gill.

Just eight minutes in The Gulls were gifted a chance to open the scoring on a chilly day on the South Coast. Billy Bodin tumbled under a rash challenge from Liam Sercombe and future Premier League referee Stuart Atwell made no hesitation in pointing to the spot. 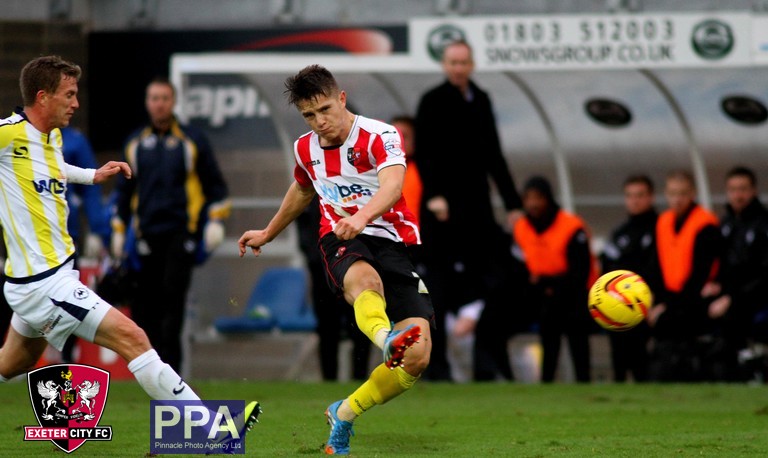 Karl Hawley confidently stepped up, but man-of-the-moment Artur Krysiak pulled off a great double handed save in front of the travelling faithful.

Buoyed on by the ever-excellent Grecians fans, City took the lead seven minutes before the break. Tom Nichols cut inside and unleashed a bullet from 25-yards out. Gulls keeper Michael Pope couldn’t get across and Nichols wheeled away having broken the deadlock in the derby.

City doubled their advantage on the hour mark with an moment of magic from David Wheeler. Sam Parkin battled on the left wing and flicked a header into the head-bandaged Wheeler. David shimmied away from two Torquay men, cut through a third, and delightfully squeezed the ball under the onrushing Pope to score the most wonderful solo goal.

Tails up, Grimes went close to extending the lead through Matt Grimes’ long range free-kick. Pope on this occasion tipped over.

The Gulls gloated a glimmer of hope with quarter of an hour to play. Penalty villaian Hawley made some amends by diverting Elliot Benyon’s deep cross. Though any inspiration was extinguished by the Devon Derby specialist Alan Gow.

Gow capitalised on such suspect defending from United and slid the ball beyond the keeper to wrap up a winter wonderland for Exeter City. Three points and bragging rights return up the A380. 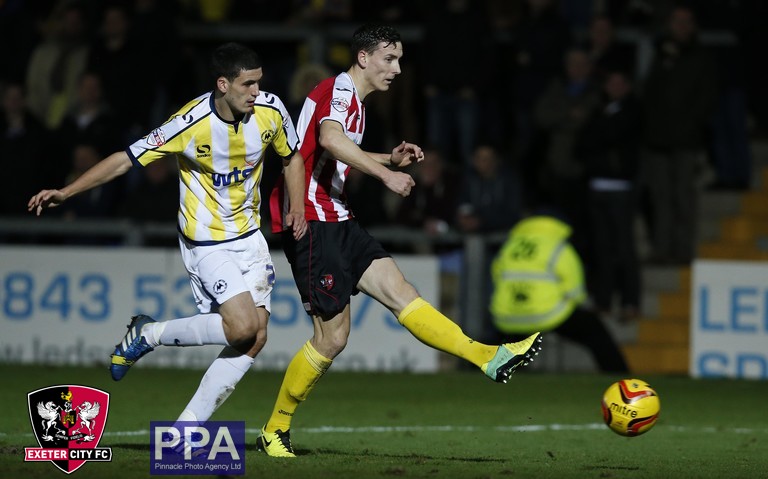 Check out the highlights below