A new season and the start of a new era. A Devon County Cup Victory, the Club’s first in six years, had herald the beginning of Abbie Britton and Aaron Wakley’s tenure, but now to the ups and downs of a season. 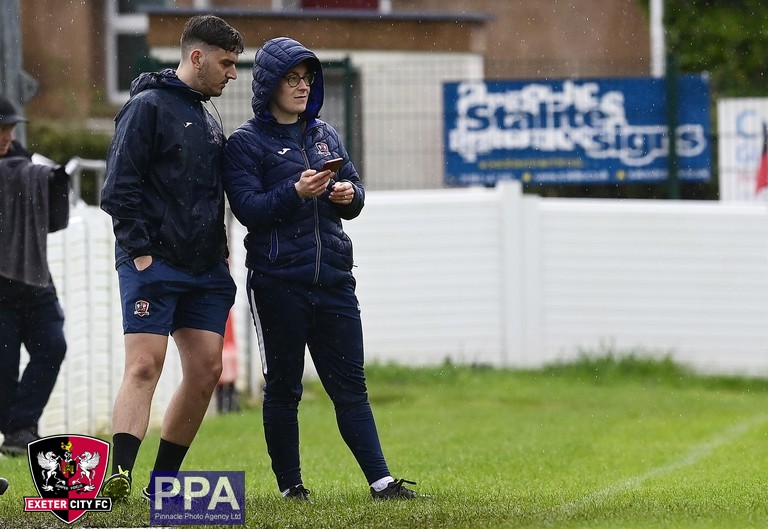 In came Abbi Bond, Natalie Warman and Sarah Stacey from Buckland Athletic. Katie Grigg signed from rivals Plymouth Argyle and young stars Charley Prouse and Jess Sandland were added to the senior squad. After the additions of Mollie Taylor and Jaydee Seaman in early January, this was a fresh squad and one keen to build on May’s County Cup success.

The season began with a strong home win over Poole Town. Mollie Taylor tapped home the Grecians’ first goal of the season, with Steph Beck adding two shortly after half time. Connie Pengelly and Sarah Stacey began their new forward partnership with a goal apiece, whilst Charley Prouse scored the game’s best goal with a fierce strike from distance for her first in City colours.

Pengelly was on the scoresheet once again a week later, her goal gaining a good point at AFC Bournemouth. An early Zoe Watkins goal was not enough a week later, Cheltenham once more proving a thorn in the City side as they left Speeds Meadow with a comeback 2-1 victory. Mollie Taylor hit two for another good point on the south coast, Southampton Women’s FC pegged back late in injury time as Taylor hit the second of two spectacular goals. The first goal of the afternoon for the City defender would win the Club’s Goal of the Month Competition for September.

A League Cup qualifying defeat at home to Plymouth Argyle would see the end of a run of games in which only one win had been achieved, it was a barren run that would not last into the autumn months.

Emily Toogood, Anthea Kaptein, Phoebe Baker and Connie Pengelly shared the goals in a 4-0 win over Larkhall, with a fantastic performance at Portishead the following week bringing another four goals. Stacey, Watkins and two from Baker sealed the points, but it was a performance that would prove a catalyst for bigger and better days.

A record breaking 1380 supporters were in place as the team played at St James Park for the first time in three years. Against old rivals Plymouth Argyle, this repeat of the County Cup Final was all set for an absorbing contest. Zoe Cunningham gave the visitors the lead before Zoe Watkins drew City level with fifteen minutes to play. With penalties to decide the tie, Abbi Bond saved from Tash Knapman and Cunningham to seal City’s progress in a game that drew attention to the potential of Women’s Football at Exeter City.

Buoyed by the performance at The Park, City were drawn against higher level opposition in Keynsham Town for the first round of the League Cup Plate competition. Sarah Stacey was now beginning to settle into her new surroundings and the forward hit a hat trick as the Grecians overpowered Town with a three goal-nil victory.

More higher level opposition were next, Cardiff City the visitors in the FA Cup and another City victory. Not to be outdone by her strike partner, Connie Pengelly was the hat trick hero this time, a deft near post touch before two classy one on one finishes signalled just how prominent the eighteen year old has become this season.

The FA Cup draw gave City a trip to Eastleigh and, with a chance to progress to Round Three for the first time in twenty years, it was a chance they took. Sarah Stacey was again at the treble, with goals from Kaptein and Pengelly sealing a fantastic away performance. A League Cup Plate win at London Seaward the following week showed more signs of the team’s ability to win on the road, Sarah Stacey, Connie Pengelly and an Own Goal made it eight wins on the bounce. Sadly, amongst that run of fixtures, a seven-nil win at Buckland Athletic, was voided as the Homers Heath side have withdrawn from the League. A particular disappointment from a City point of view for Connie Pengelly who was the scorer of three goals in a twenty five minute substitute appearance that evening.

City will look to finish off their 2021 with FA Cup victory at Southampton Women’s FC, a fourth round tie with West Bromwich Albion awaits and the possibility for this team to make history in becoming the first Exeter City side to reach Round Five.

The Grecians’ current run saw Abbie Britton and Aaron Wakley pick up the Manger of the Month award for the National League and the air of confidence and optimism is strong as the second half of the season awaits in 2022. A League Tittle may not guarantee promotion, due to League restructuring, but this City side, you feel, will be in the hunt. Still competing in all three cup competitions, this could be a breakthrough season for the football club. The record breaking 1380 people who attended the Plymouth Argyle game made a big statement, Women’s Football is on the up at Exeter City and now this talented squad are looking to make their own history in 2022. 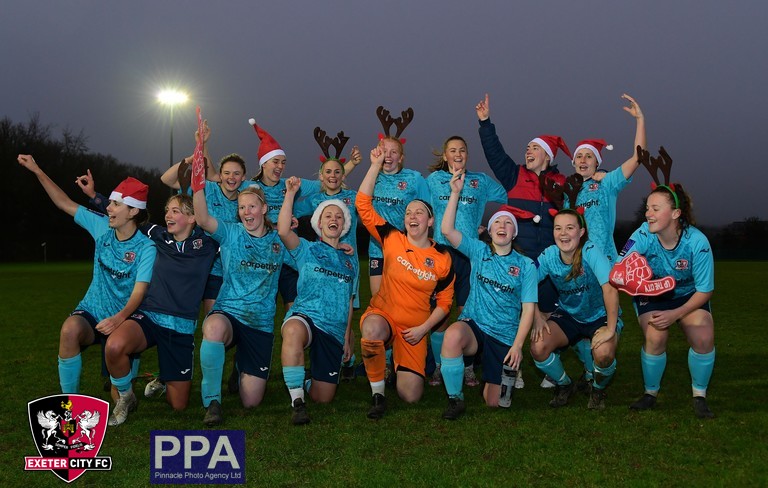