Jökull Andrésson says that he is delighted to be back with the Grecians, as he puts pen to paper on a loan deal until the end of the season.

"It feels great to be back, said the Icelandic stopper. “It’s the club that started off my professional career and it’s an honour to be back. The club, staff, everyone has done so much for me so it’s great to return.”

In a strange turn of events, Jökull was at St James Park on Tuesday night with Morecambe as he had spent the last week on an emergency loan.

"Tuesday night was crazy, such a small world. The two games I get with Morecambe one had to be Exeter at St James Park. It was lovely to see everyone. I promise you it was nothing personal – all business!”

"It’s a long season ahead. Personally, I’ve got to make sure I’m focussed now. I’m eager to go, I can’t wait to get in and restart the season with Exeter.”

When asked about why he wanted to return to the club, Jökull said: “It’s such a big family. The biggest reason is that I came here at 19 not having played a football league match and everyone was so welcoming. There were no judgements if I made a mistake, and I think that’s why I was probably able to perform at a good level. I really love this club and what you guys have done for me.”

Jökull first joined the Grecians as an emergency loan on October 27 as the Grecians had lost both Jonny Maxted and Lewis Ward to injury. He would go on to make nine appearances for Exeter City and made two clean sheets.

"I'm happy that I was able to do well and show the fans what I can do. Everyone thought I was an unexperienced 19-year-old who didn’t know what to do, but I’ve been training so hard and I was happy to show what I could do in the nine games with Exeter.”

"Leyton Orient was crazy. I was away with the first team in Manchester. I’d be in my hotel for ten minutes and the goalkeeper coach told me I’ve got to go back, and I’d be playing with Exeter tomorrow.

"I couldn’t believe it. I was struggling to get a loan anywhere as it’s hard at the moment with Covid. I was so grateful that Exeter wanted me on an emergency loan. This great club in League Two.

“It was a crazy moment. I travelled straight back to Reading and played the next day. Luckily, I did aright in my first game and was able to carry on for the next nine games. Football is a mad world; things can happen in an instant and change your career.” 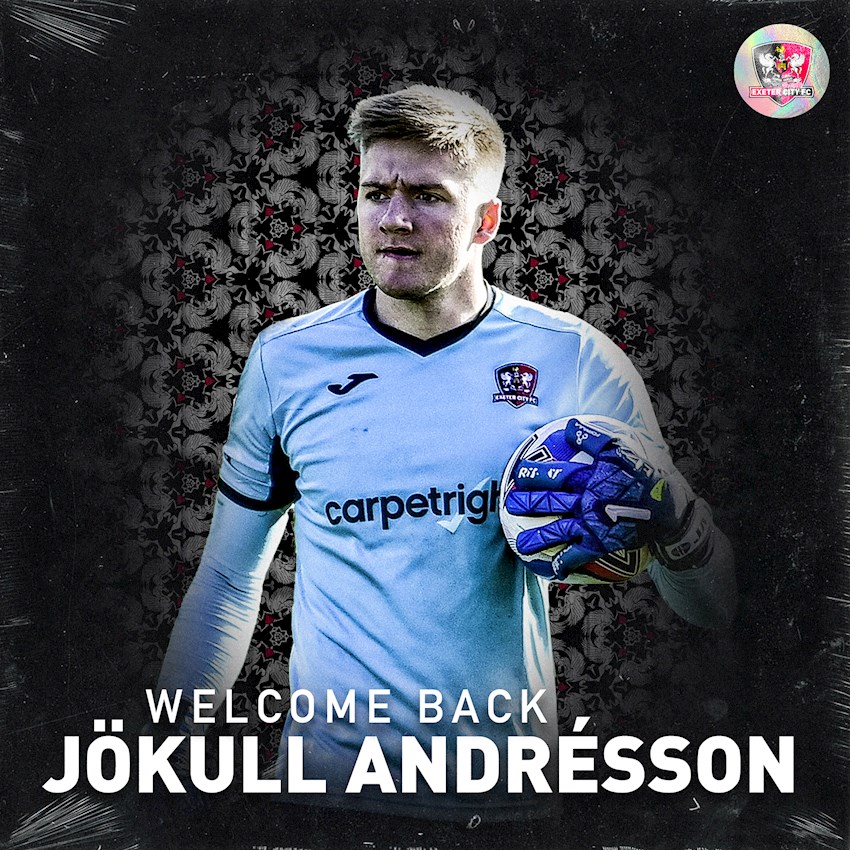 Speaking about his ambitions for the remainder of the season, Jokull was keen to emphasise the team’s aim for promotion to League One.

"I think that Exeter are a play-off team or better than that. I think we can go up a league because it’s a really good team. That is obviously the aim but it’s game by game at the moment.

"I’m still only 19 so every game is a new experience. I’m just so happy that Exeter wanted and trust me and I’m really grateful."I’ve always been vocal and talked a lot. I’ve never been afraid to scream at my defenders or the team because I always want the best for the team.”

Sadly, Jökull is yet to experience the fans at St James Park but he knows just how passionate they are about the club.

“It’s such a shame because I know how great they are and how supportive they are. I really hope we will be able to see each other before the end of the season as I know they will be a massive boost for the team. Personally I would love to see them.”