Ahead of Exeter’s long venture to Yorkshire for Tuesday evening’s rearranged fixture against Harrogate Town, we highlight a selection the Sulphurites’ dangermen to look out for.

The match-winner in December’s meeting, Jack Muldoon caused problems for City’s centre-halves all game. The Forward’s touch and finish at St James Park proved his striking prowess. The 31-year-old started his senior career in non-league at Brigg Town and then featured for the World’s oldest club, Sheffield F.C.

Selected spells at Alfreton and North Ferriby followed before getting his Football League move to Rochdale in 2014, quitting his full-time job as a plasterer. A year later Muldoon was on the move again, this time to the Cowley Brothers’ Lincoln City where he featured 79 times scoring 12 goals.

In 2018, Muldoon got his move to Harrogate and has been influential in Town’s rise to Football League. In over 100 appearances for the Sulphurites Muldoon has 39 goals and nine assists. City’s defenders need to be on their guard on Tuesday if they are to ensure Muldoon does not extend that impressive strike-rate.

No, not that one. This Aaron Martin was the keystone to every Harrogate attack at EX4 last month, notching the assist for both goals. Very much the Yorkshire side’s Target Man, Martin used his physicality to dominate the final third, winning most aerial battles- including for the two finishes.

This is Martin’s first foray into League football after helping Town secure promotion last season. The striker played his youth football at Sheffield United and Barnsley before being released in 2008 and has spent his playing career within a fifty-mile radius of the Steel City. Beginning at Staveley Miners Welfare just outside Chesterfield, Martin has turned out for Worksop Paramore, Goole, Sheffield F.C, Brighouse Town and Guiseley- before moving to Wetherby Road in March 2020.

So far this term Martin has three goals and five assists to his name, but its his athletic acumen that may cause the most problems for the Grecians.

Ever present in this division, Jon Stead is almost a legend of the Football League. Now 37, Stead began his career at Huddersfield Town and has played over 600 club games. Stead represented England U21’s whilst at then Premier League side Blackburn Rovers. 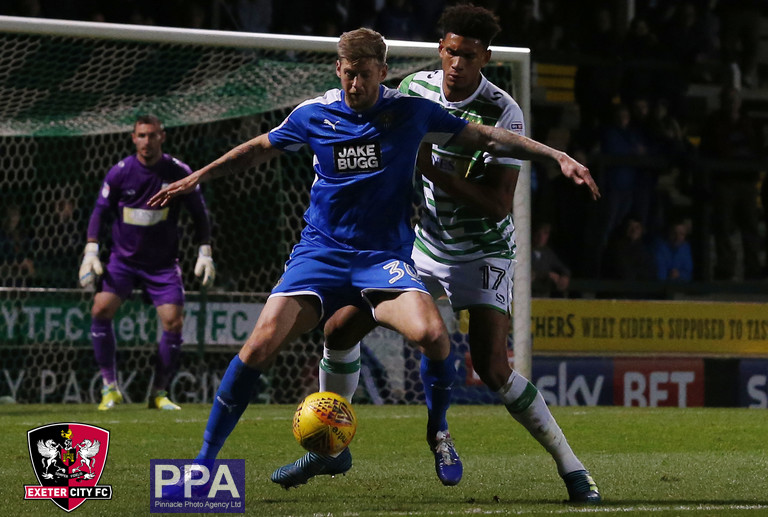 During the mid-2000’s Stead had spells at Sunderland and Sheffield United before a three-year stay in the Westcountry with Bristol City. In 2015 Stead scored the first goal of the comeback in a famous FA Cup upset when Bradford City beat Chelsea 4-2 at Stamford Bridge.

Stead seems a thorn in City’s foot every time he does feature against us. In the In six games against City, he has notched three goals and nabbed one assist, though in December he could only earn a place on Simon Weaver’s bench.