In this series, Charlie Howell builds a squad of Exeter City Centurions, taking a look at each player’s career issue-by-issue, with legendary right-back Scott Hiley the latest to feature.

Luckily for Grecians all over the country, Scott Hiley chose to make the commute up the A38 throughout his teenage years and be a part of Exeter City’s famous academy, despite being born and raised in Plymouth. Lucky because, without the countless evenings and weekends of hard work, City fans and, most importantly, Scott himself wouldn’t have that moment that is forever frozen in time. That moment when a non-league right-back embarrassed the world’s best player on live TV, broadcast across the world. That moment when Scott Hiley nutmegged Cristiano Ronaldo.

However, while that moment cemented his place in footballing history, Scott was already adored by City fans way before that moment.

Patience was key for the young defender when he first turned professional in 1986 as Scott had to wait until October 1987 to make his league debut in a 2-1 defeat to Burnley. He then proceeded to dip in and out of the team until the arrival of Terry Cooper as manager in 1988, when Scott made that right-back position his own.

After coming on as a sub in the first game of 1989/90, Scott was an ever-present for the rest of the season as City stormed the league title, combining brilliantly with Brian McDermott down the right-hand side and terrorising fourth division defences. 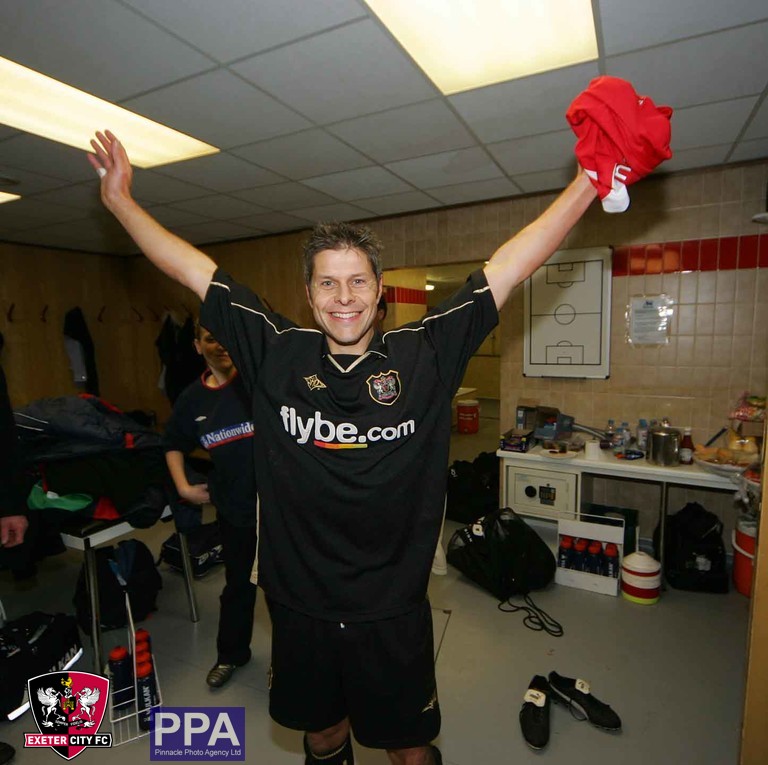 Scott left City for the first time in 1993 and began his ascent up the leagues, firstly with Birmingham City in the third and second tiers before playing in the Premier League with Manchester City and Southampton.

Nine years after leaving, Scott re-joined City in 2002 to aid the club’s fight against relegation from the Football League but, despite his best efforts, in a season of turmoil at St James Park as the club went through four managers Exeter were relegated into non-league for the first and only time in the club’s history.

In one of the youngest squads in the club’s history, Scott was a key experienced figure as he took on the joint role of player-coach to help with an extremely tight budget.

Scott left City for a second time in 2006 after helping the club to have secured its future on and off the pitch, with the lucrative FA Cup third round tie against Manchester United, in which Scott played in the original tie and the replay, clearing the club’s debt and setting up a successful future.