After a summer of preparation, the suspension to National League football in November led to a break in momentum, after two games in the month of December, the new year has once again seen a break a play.

With so much uncertainty over the season’s future, focus on player well being and fitness has been a difficult task to undertake. Thankfully, Exeter City’s Women’s Team are in the capable hands of Lauren Watts.

Lauren moved back to the area in March 2020 after finishing her degree in Sports Therapy at Hartpury University. Whilst beginning the process of starting her own business, the opportunity to work in Women’s football for the first time arose. However, her current role is not Lauren’s first. "I worked in semi-professional men’s football with Brimscombe and Thrupp FC, who play in the Hellenic Premier League. I worked with them for three seasons which gave me valuable experience in the football industry." 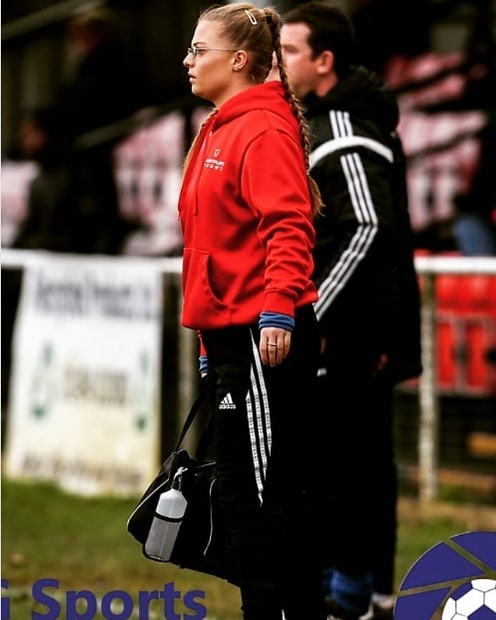 Lauren’s role with the team is varied, offering assistance during training twice a week as well as on Matchdays. "Before each session I treat any players carrying injuries; this could be anything from a full injury assessment, sports massage or adding support to any existing injury in preparation for training. At the Tuesday session I usually deliver a twenty-minute recovery session to all the players to aid recovery from the game on Sunday. On a Thursday I help with muscle activation activities prior to training. For the remainder of both sessions I focus on sports injury rehabilitation of currently injured players in an effort to help them return to the pitch."

Whereas the weekday preparations will focus largely on recovery and support, Lauren’s Matchday role is to assist the team in readiness for the game and then be ready herself for what develops when the whistle blows. "At the beginning of the warmup I focus on muscle activation band work. During the match I need to be prepared and ready to go on the pitch to access and treat injuries. Post-match I run the cool down for the players and, once the team talk is complete, the treatment on those who have picked up injuries can begin. I can also offer advice to help with recovery in preparation for training on Tuesday evening." 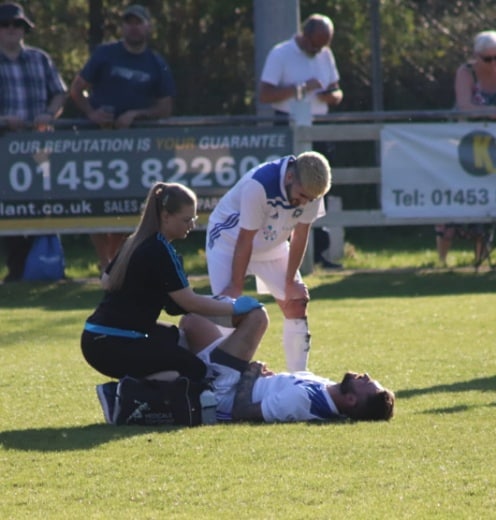 With the experience Lauren has gained in recent seasons, the more procedural aspects of her role are familiar, the challenge presented by Lockdown is something that has needed a different perspective though. "We have held quiz nights and fitness sessions to keep the team together as much as possible before we can return back to the pitch. The main focus for me has been making sure all the players are keeping fit so that when we are allowed to return the team are in the best condition possible. This has led to me offering the team a weekly online Zoom fitness session through HIIT training."

As well as working with Exeter City, Lauren is currently supporting the England Schools Football Association, providing treatment at trial events for both boys and girls teams of varying age groups. "I have really enjoyed working with the EFSA. My time with them has allowed me to expand my experiences of seeing injuries and recovery times with younger athletes. The role involves travelling to several different football grounds and providing sports therapy to the players; usually pitch side first aid and injury advice. Following on from my post as ESFA Sports therapist I was selected to be the England Therapist for the Under Fifteen Home Nations Cup, sadly it was postponed due to COVID19."

With her wealth of knowledge in the field successfully attained over the past few years, Lauren has now started her own business, LW Sports Therapy, something that cannot have been an easy process with the difficulties presented in 2020. "So far so good. I have really enjoyed working with my clients, some of the appointments have been face to face but, in times of national restriction, they have been online. Since graduating last year, I have already expanded my qualifications through online courses so the services I can offer keep expanding."

As well as a multitude of qualifications in the Sports Therapy field, there is one additional award on Lauren’s CV, an FA Level 1 Coaching Qualification. So, any intention to follow her Father Clive’s footsteps into coaching? "I attained it back in 2013. I have delivered a few coaching sessions with various teams, but never worked in a coaching role. I don’t currently have a plan to pursue a coaching career, I would rather use my qualification and experience running online fitness sessions.”

As everyone keeps their fingers crossed that football will resume in the near future and that the season will continue in some capacity, thanks to the hard work and commitment of Lauren Watts, City will be prepared and ready to get back to football should it happen.