Tuesday evening will see Exeter City’s under-18s try and create a bit of history at St James Park when they compete in the fourth round of the FA Youth Cup against Leicester City under-18s in a 7pm kick-off.

The young Grecians’ journey to round four began back at the start of November when they first knocked out rivals Plymouth Argyle at Home Park. A week later City sealed their spot in the third round with a thrilling extra-time victory over Cheltenham Town. Exeter's youngsters then delivered one of their most complete performances of the season to dump out AFC Bournemouth in December. Now, under the St James’ Park floodlights once again, against Premier League opposition, Chad Gribble's side have a wonderful opportunity to reach the fifth round for the first time in the club’s history.

Leicester’s youth team, managed by Adam Barradell, are currently struggling in the under-18 Premier League having accumulated just 10 points from their first 16 matches. The Foxes, however, come into Tuesday’s contest off the back of an impressive 5-0 victory over Sheffield Wednesday in the previous round of the competition, and recorded an encouraging 2-2 draw with Chelsea on Saturday.

The Grecians on the other hand can approach the game with plenty of optimism. After finishing third in the Youth Alliance South West Division, they have started the Regional Merit League with four points from their opening two fixtures, with the likes of Sonny Cox, Charlie Hanson and Nelson Iseguan all looking sharp in attack.

Ahead of Tuesday’s clash, Gribble acknowledged this was a cup tie his squad have been looking forward to since they defeated the Cherries in round three.

“We’ll be facing a high-quality opponent, but you wouldn’t expect anything less at this stage of the competition. We don’t know exactly what they’ll bring, or how they’ll exactly line up, but we know that whatever they decide to go with, they’ll put out a fantastic set of players, and our boys will be looking to go and test themselves against that. 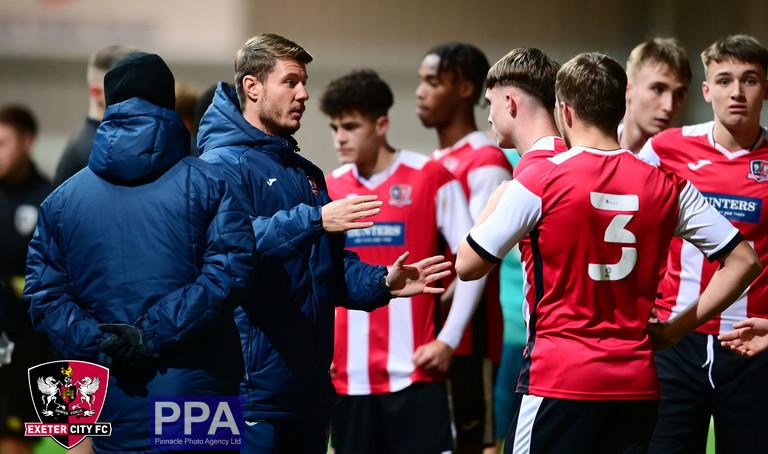 “Whatever happens, the group of staff are extremely proud of the players. We will be going into it throwing everything at it. We have nothing to lose. This set of players have a chance to make history, and it is great for everyone, players and staff, to all be a part of that.

“When you consider the level of opponent, the Category One Academy status, and the fact they are a Premier League club, that would make us huge underdogs. It was like that for us in the previous round against AFC Bournemouth, and what we do have on our side is the experience of this competition. We have the experience of playing under pressure and at a stadium from the three previous rounds of this year’s cup run. A number of these players can draw upon the experience of two rounds from last season, while some of them played in the FA Youth Cup as Under-16s two years ago.

“The players won’t be fazed by the occasion, and the outcome will come down to whether the boys can put in a performance on the night, and if we can do enough to stifle Leicester.”

The Story So Far

Exeter City won the Devon derby in extra time at Home Park in the first round. Sonny Cox and Toby Nevile scored to make it 2-2 at full time, before Joe Wragg popped up with the winner in extra time.

A Sonny Cox double and a strike in extra-time from Ellis Johnson meant the young Grecians progressed to round three of the compeition.

City progressed to the fourth round with an impressive showing at the Park as a Sonny Cox strike and a double for Jack Veale sealed the tie.