Exeter City boss Matt Taylor has thanked the five senior players and four young professionals who will be leaving the club following the expiry of their contracts this week and wishes them all the best for the future.

Following the announcement of the retained list - which can be viewed in full here - Lewis Ward, Jonny Maxted, Tom Parkes, Alex Fisher and Nicky Ajose have all been released by the club at the end of their current contracts. The four young players released are Noah Smerdon, Will Dean, Lewis Wilson and Louis Morison. Robbie Willmott and Jokull Andresson have returned to their parent clubs. 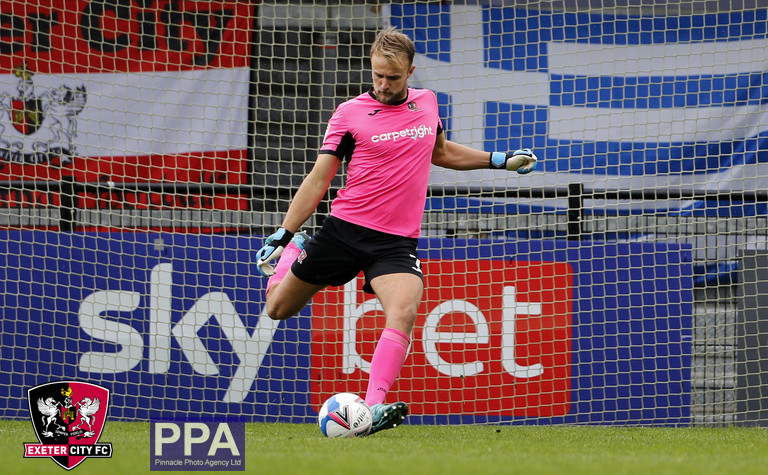 Having signed for the club in June 2019, Lewis Ward made 34 appearances for the Grecians before ending this campaign on loan at Portsmouth, while Jonny Maxted made 39 appearances for the club since his arrival. Speaking about their departure, Taylor says he is disappointed that injuries hampered both shot-stoppers City careers. “Lewis and Jonny have both had some bad luck,” he said. 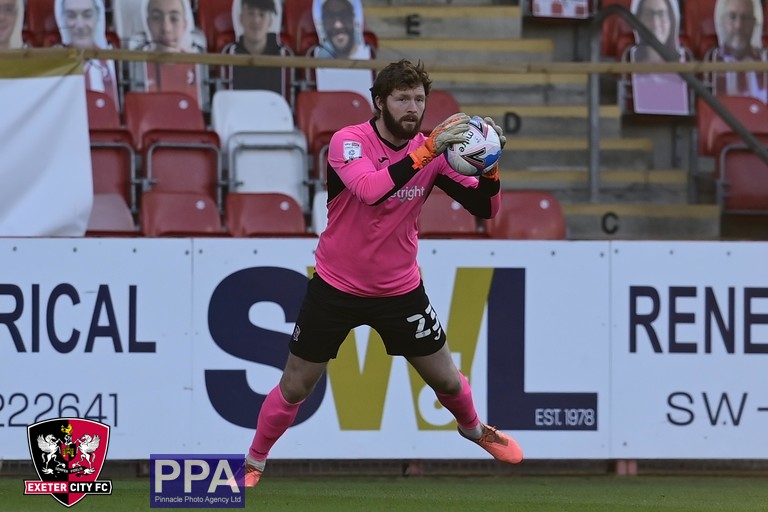 “They both had periods of good form but due to injuries they both found it hard to get that consistency and fight for that number one shirt. With the introduction of Jokull, initially on emergency loan and then again in January, that put them second and third choice respectively. Obviously Lewis went to Portsmouth. Both are being released on the basis that neither of them were able to grab hold of that shirt.

“Both have suffered injuries you just couldn’t predict, such as the broken arm and the ankle injury for Lewis, then a dislocated kneecap and a broken finger for Jonny. You don’t expect those to happen when you sign two good goalkeepers, you expect them to play a lot of games.”

Tom Parkes departs the club with 62 matches and three goals under his belt, including one in the 4-0 Devon derby win over Plymouth Argyle last season. He also scored against Crewe in the final home match before the Covid lockdown and the winner in this seasons’ clash with Carlisle United. Tom has been influential at the heart of the defence at times this season, helping the side to eight clean sheets. “We all felt that we had the best out of Tom when he arrived here and he was in the best shape he could be,” Matt said. 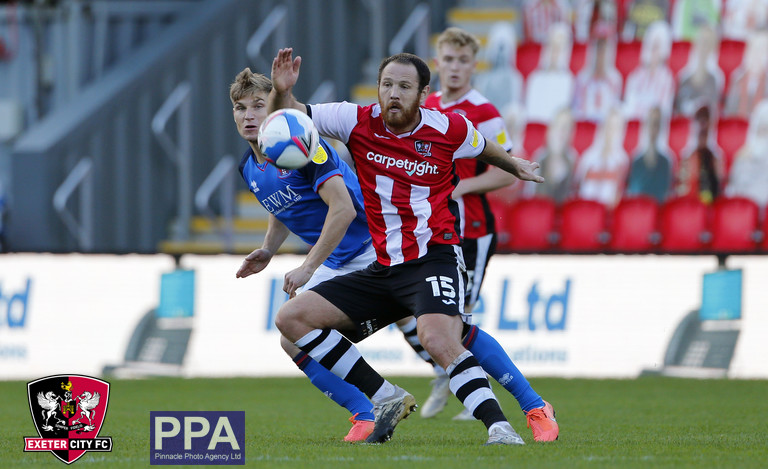 “Tom really struggled in lockdown and he will openly admit that. He was unselectable for the play-off campaign and the start of this season, but we worked so hard since then to make himself available. His performances have reflected his struggles and he probably hasn’t had that consistency, and the emergence of Alex Hartridge has given us a different dynamic at the back.”

Alex Fisher’s time at the Grecians will surely be remembered for the stunning late equaliser at Southend, which is in contention for our goal of the season, and his finish against Grimsby Town just two weeks ago. Leaving with 46 showings in red and white, Fisher has had opportunities limited this season, but stayed at the club determined to fight for a place in Taylor’s squad. 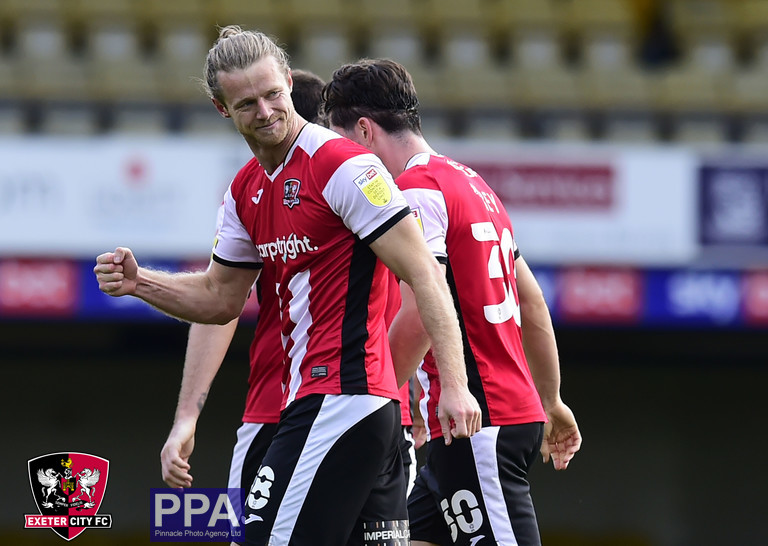 “At the start of the season we made it clear to Alex that he was behind the likes of Ben Seymour, so he fell down the pecking order. He contributed at times but those moments weren’t enough and didn’t quite get that consistency in his game. He can finish on his day and he’s the kind of player you’d want the ball to drop to in the box, but sadly that wasn’t quite enough for us over the two year period.”

Speaking on Nicky Ajose, Taylor has expressed his disappointment at how his spell with City has transpired. Ajose scored City’s first goal of the season in our win over Forest Green in the EFL Trophy, but has struggled with injuries in his time at the club. “It’s been disappointing from the start,” Taylor said.

“We expected so much and felt when we brought him in he would address that real threat we needed. He was hampered with his knee early on, then was disjointed that season so he wasn’t able to affect the team in the way we needed him to. This season, like Alex, he was down the pecking order behind the likes of Ben. 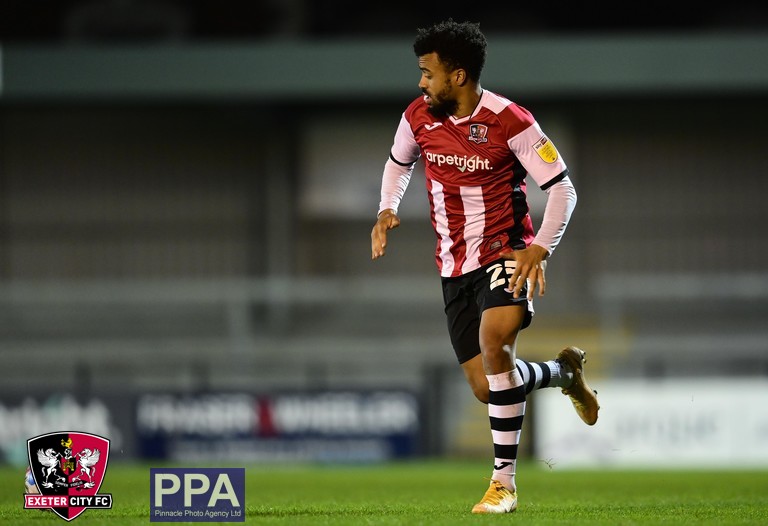 “Sadly this season, when he has had the opportunity we just hadn’t seen enough from him. It’s been a disappointing two years for both parties.”

Contracts have been offered to Jake Taylor, Randell Williams, Lewis Page and Pierce Sweeney, however Matt has confirmed that he expected both Jake and Randell to leave the club this summer, while discussions continue with Lewis and Pierce over their futures at St James Park.

Jake Taylor joined the club in January 2016 and went on to become Matt Taylor’s captain for the last three seasons. A true servant to this club since his arrival, Jake had his best goalscoring season of his career in 2017/18, notching eight goals and narrowly missed that number this season, finding the net six times, including a memorable run of four goals in two weeks in October and November. Taylor has been a model captain of the football club and, as Matt says, a huge influence on and off the pitch.

“He has cut a frustrated figure at times because his influence has been second to none on and off the pitch, but we’ve not been quite good enough to support that. He deserves to go onto bigger and better things and get that financial security so to speak. 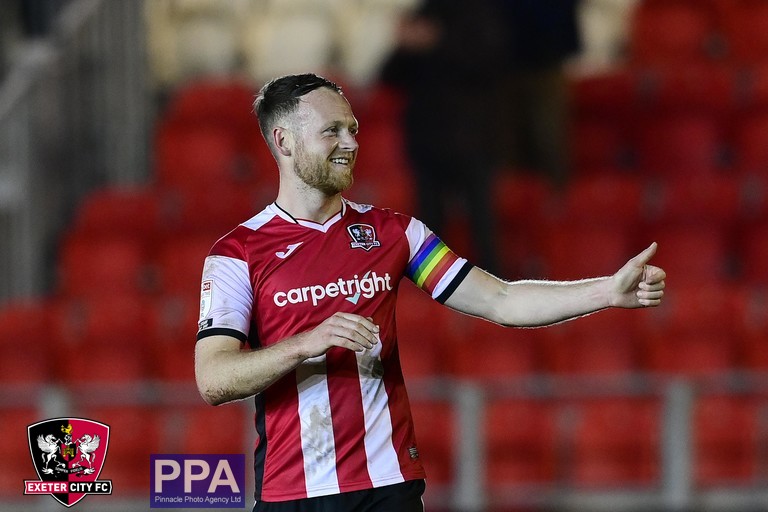 “I know he wants to go back home to Reading so he will be looking for a club closer to there. We wish Jake all the best. I can’t speak highly enough of him and his influence on a daily basis, which the fans don’t see, but also in terms of games.

“In terms of senior players that I can trust every week, you know what you’re going to get out of Jake and that is a great reflection over the course of the season and his career here.”

Randell Williams is also expected to leave upon the expiry of his contract, which Matt says is what the player himself chose to do after turning down offers last summer. As well as memorable goals, and that backflip, in the 4-0 win in the Devon derby, Williams also found the net a further eight times, including two in our 4-1 win at Grimsby in December and our equaliser in last week’s win at Bolton.

“Unfortunately, his game has struggled due to a number of reasons,” Matt said.

“At no time this season has he been able to find any form in his game and that is in stark contrast to last season. The stress fracture came at the wrong time for him as we’ve only been able to see glimpses of that form. 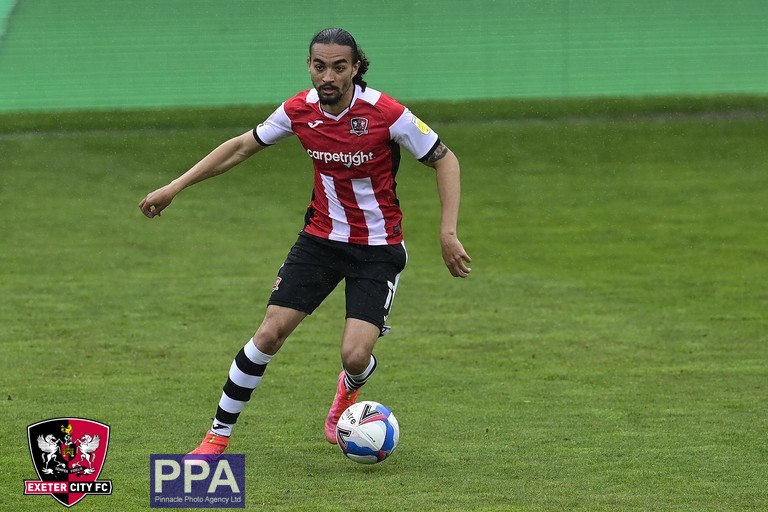 Two players who have impressed the manager this season are Pierce Sweeney and Lewis Page, and thus they have been offered a new contract to stay in Devon. 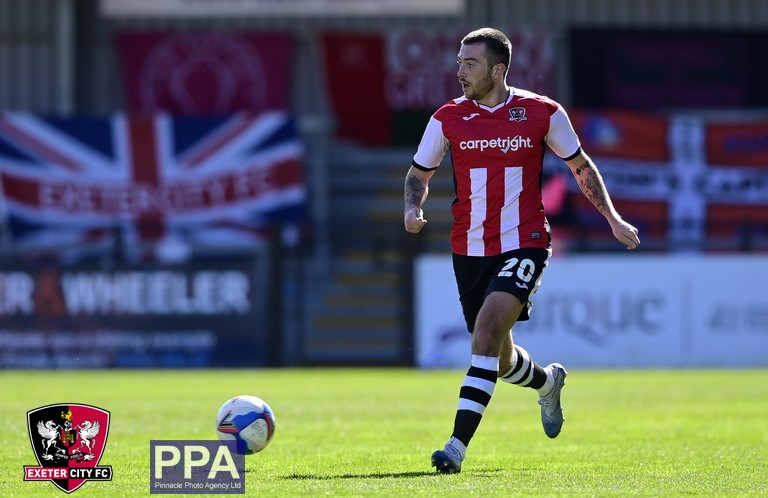 “Pierce has had a good season and formed great partnerships along the way. He has been rewarded with a contract offer, but like other players he is probably in a stronger position than he was last season so we fully respect that process, and we fully respect that decision that Pierce will make. This season has been a real positive for him and he has to take all the credit for that. The contract we have offered Lewis is a good contract and it reflects what we expect from him, but of course he has to decide what he can get elsewhere and that is the way it works. You have to do what is right for yourself. We do hope Lewis and Pierce will decide to stay with us.” 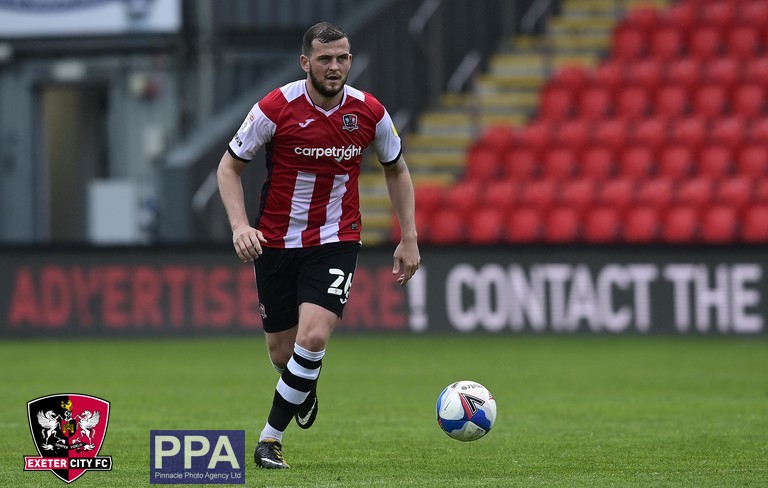 Matt has also provided an update on the futures of our two loaness, Jokull Andresson and Robbie Willmott, who have returned to their subsequent clubs. Jokull quickly became a fan favourite this season following an emergency loan and subsequent regular loan spell, while Robbie made an impact in his time, scoring in our win at Colchester and providing assists both against Bradford and Barrow.

Speaking on Jokull, Matt had this to say. “He was an unknown quantity in that first game at Leyton Orient, but we knew after that first five minutes that he had personality and a character to survive at League Two level.

“He’s by no means perfect and he knows what he has to improve on, but for a 19-year-old goalkeeper to perform the way he has, and capture the hearts and minds of the fans without them being there, is absolutely incredible.

“It’s what you want from players coming to this football club. People talk about this football club being special but it’s only special because of the people that are involved in it. Jokull has provided a great extra added source of interest, whether that be in Iceland or in our own fanbase. 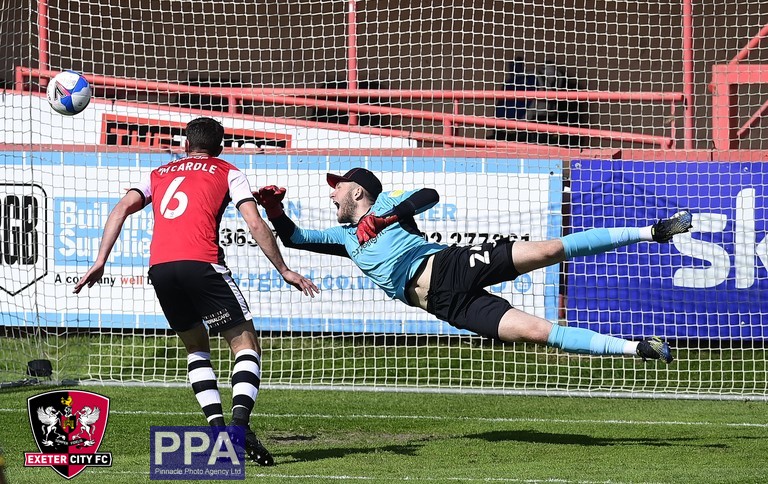 “Let’s be honest, he’s played so well for us this season. His clean sheet records and goals against record is second to none. We’d love to get him back, but I’m sure he’s got his own aspirations back at Reading. If they don’t work out in pre-season then we’ll be on hand to make that phonecall.

“As for Robbie, He provided what we needed in the wide areas after losing Nicky Law and the injuries to Joel Randall and Randell Williams. Robbie has been a strong performer and we’ll monitor his situation back at Newport.” 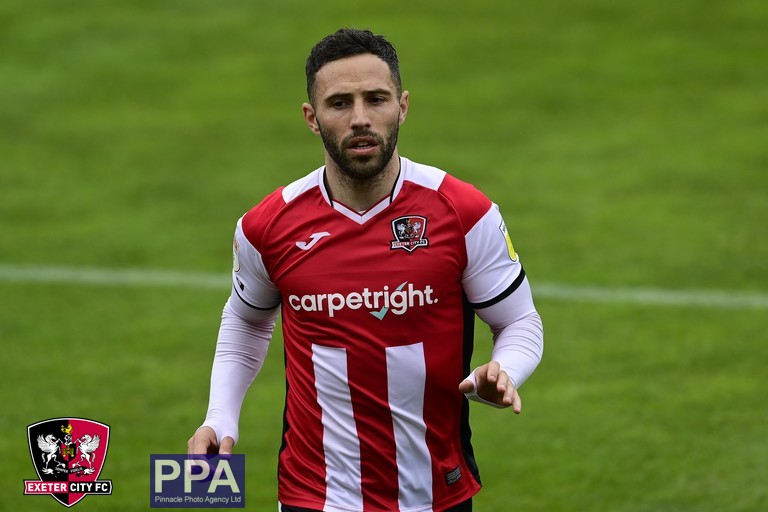 “Will Dean’s pathway is just not there in terms of the first team,” he said.

“We don’t keep players on for the sake of it, and unfortunately for him we have a lot of centre halves contracted. If we’d kept him, we’d be sending him out on loan to a lower level and we can’t quite give him that opportunity in the first team. 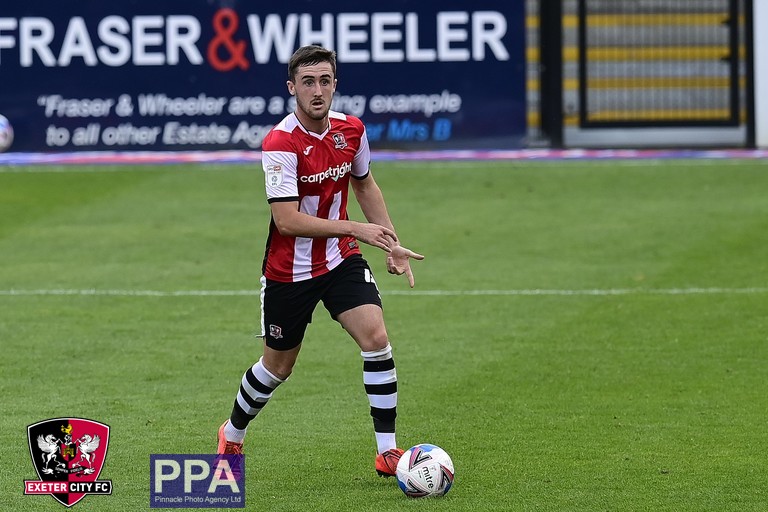 “In relation to the other three, there are a variety of reasons why we have decided to release them. Noah Smerdon will leave us a better player. For Louis Morison and Lewis Wilson, they haven’t quite been able to make the jump from academy to first team.”

“Performances have earned these guys contracts. We’ve seen them in the under-18s in the Youth Cup this season,” Matt added.

“Alfie Pond is someone we’ve earmarked for the future. I believe he one day could be the captain of this football club if he carries on on the right track. Nelson is certainly closer to the first team than the others. 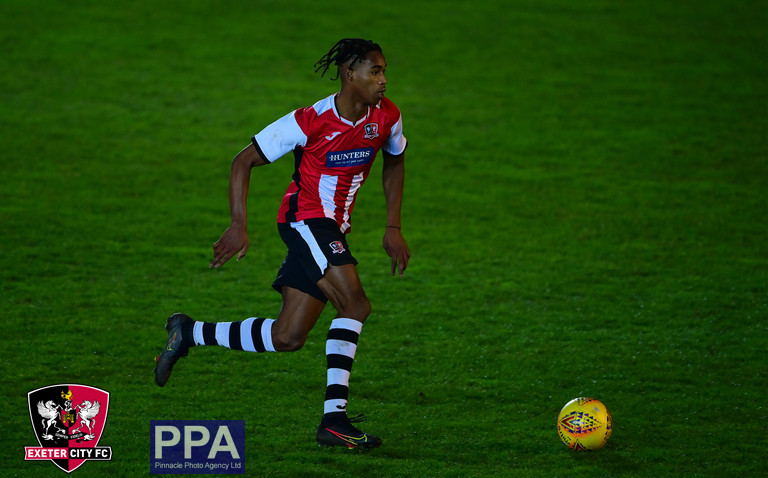 “Jack Veale has contributed with goals, assists and set pieces, and Jack Arthur has been training with us all season. He showed a real side of maturity during the seasons which is huge for a goalkeeper. Ellis Johnson has been another stand out performance for the under-18s this season.”

The manager also provided some clarity on the speculation surrounding Harry Lee and Sonny Cox, saying he hopes to be able to confirm their futures over the coming weeks.

“We expect to know in the next couple of weeks whether these players will be contracted with us. It is down to the players themselves and their parents, and agents are always involved in this situation,” he said. 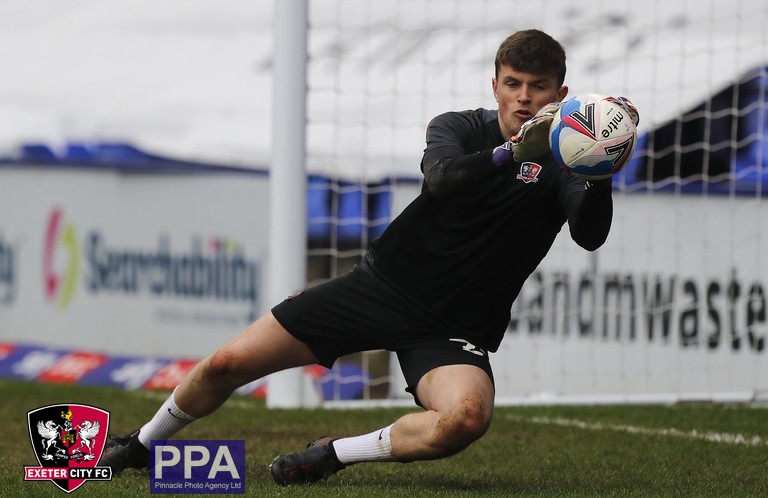 “They have had experience of training at the best clubs in the world and that is huge for them. We are always open to offers for our players, but we of course really do hope they stay with us so we can begin to build a first team squad with those two players in it.”