Exeter City came from behind to see off Bradford City and progress to the second round of the Emirates FA Cup, thanks to goals from Tim Dieng and George Ray.

Ray then bundled in with a few minutes remaining, meaning City will travel to Cambridge United on Saturday.

Paudie O’Connor had the first sniff of goal as the Bantams began in the ascendancy. The defender flashed a volley across the box, just begging for a final touch from one of his teammates which never came.

It took eleven minutes for Bradford to take the lead. Lee Angol, sent off in original replay, beat Cam Dawson at the near post to fore the Bantams in front. 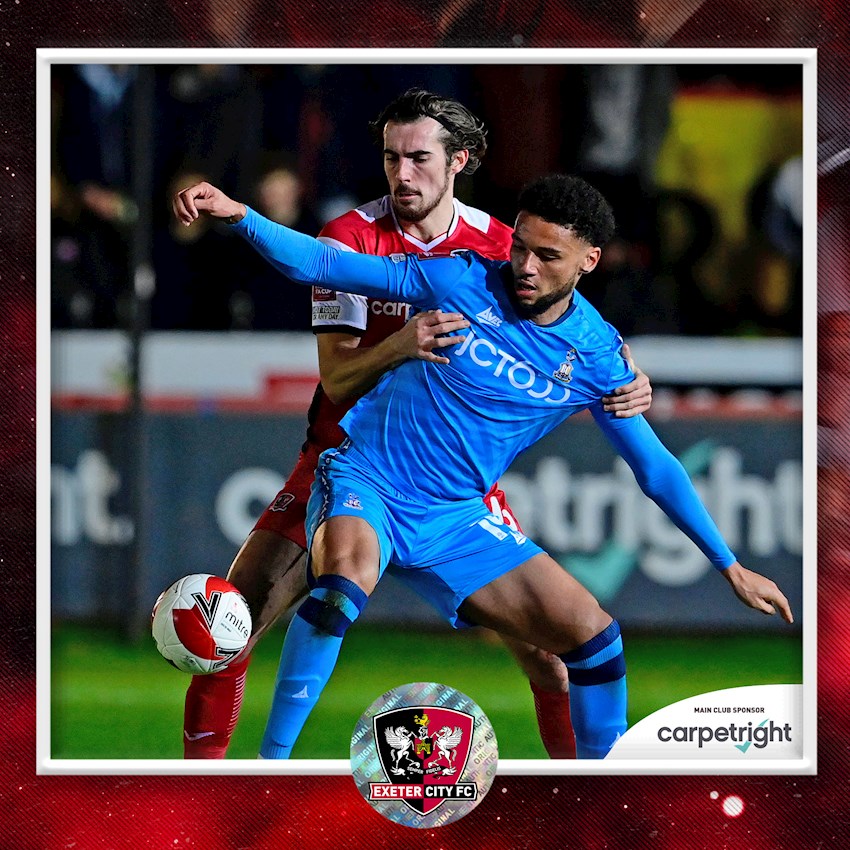 Oscar Threlkeld could’ve made it two as he arrived late at the far post from a long thrown. His sliced volley flew narrowly wide via a deflection.

It was a tough first half hour for a City side who have scarcely played together. Passes astray aplenty frustrated Matt Taylor’s men.

The crossbar was rattled by Callum Cooke on the far side as the Bantams tried to capitalise.

Cam Dawson had his palms stung by an Elliott Watt volley. From the resulting corner, the Wednesday-loanee denied Threlkeld’s daisy cutter and was back on his feet in time to stop Angol’s follow-up in a miraculous double save. 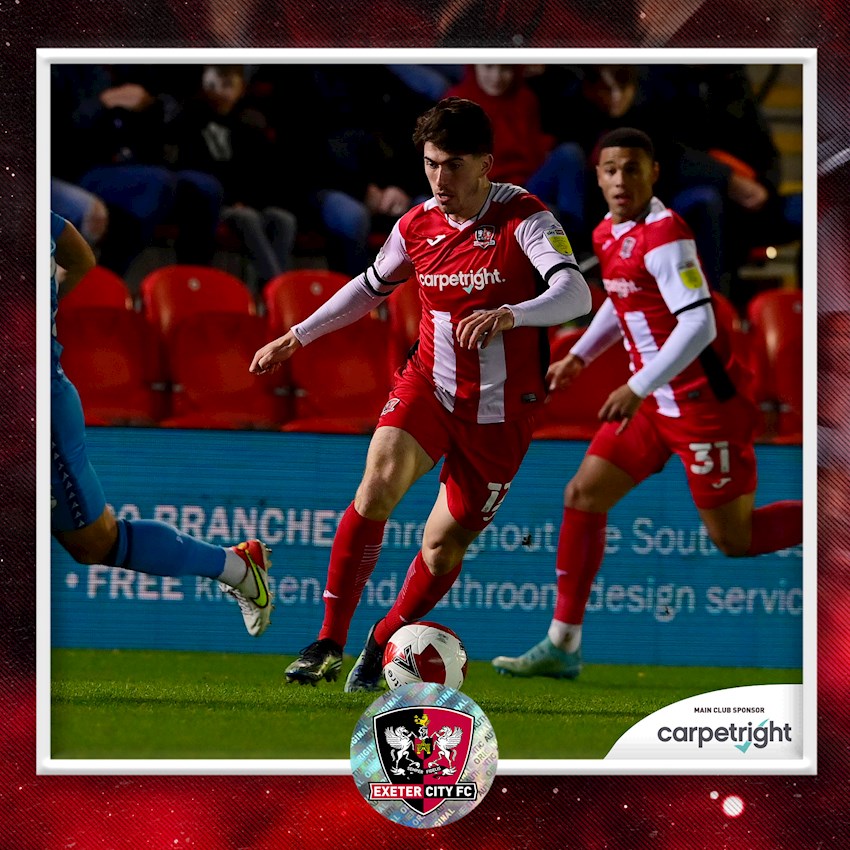 The half time interval came at the right time for the Grecians, for a much-needed chance to reassess and regroup.

Josh Coley almost opened the second half with an equaliser. Owura Edwards drove well through the midfield and slipped in his teammate. Richard O’Donnell was forced into his first action of the game, closing down the one-on-one.

City’s second half response paid immediate dividends and the Grecians found the net on 51 minutes.

A neatly worked free kick allowed Josh Key to deliver to the back post. Tim Dieng expertly brought the ball down and squeezed it under O’Donnell to fire City level. 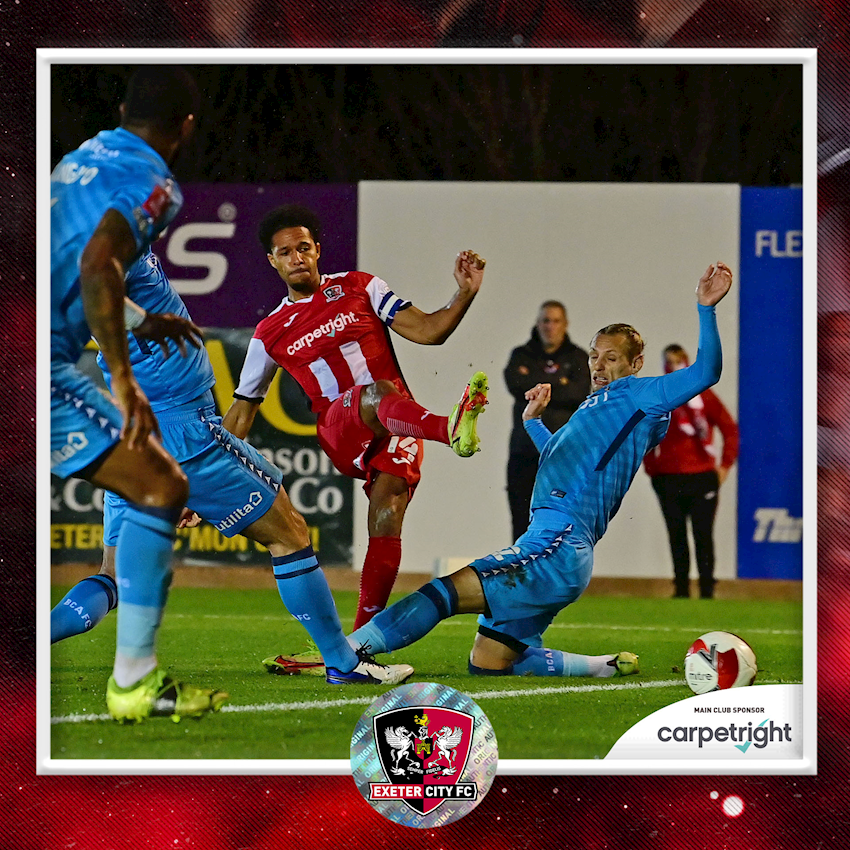 Sam Stubbs stooped low to a Jevani Brown corner just after the hour but didn’t get the required connection to steer Exeter ahead.

Introduced on 68’ minutes, Matt Jay forced O’Donnell into a good save. Josh Key similarly saw O’Donnell the anti-hero as the keeper pushed back into a crowded area, for Threlkeld to desperately clear.

City’s excellent pressure paid with George Ray’s second goal in as many games!

A very, very deep Archie Collins corner was attacked by the centre-back, who was stronger than anyone around him, to bundle the ball over the line- turning the game on its head. 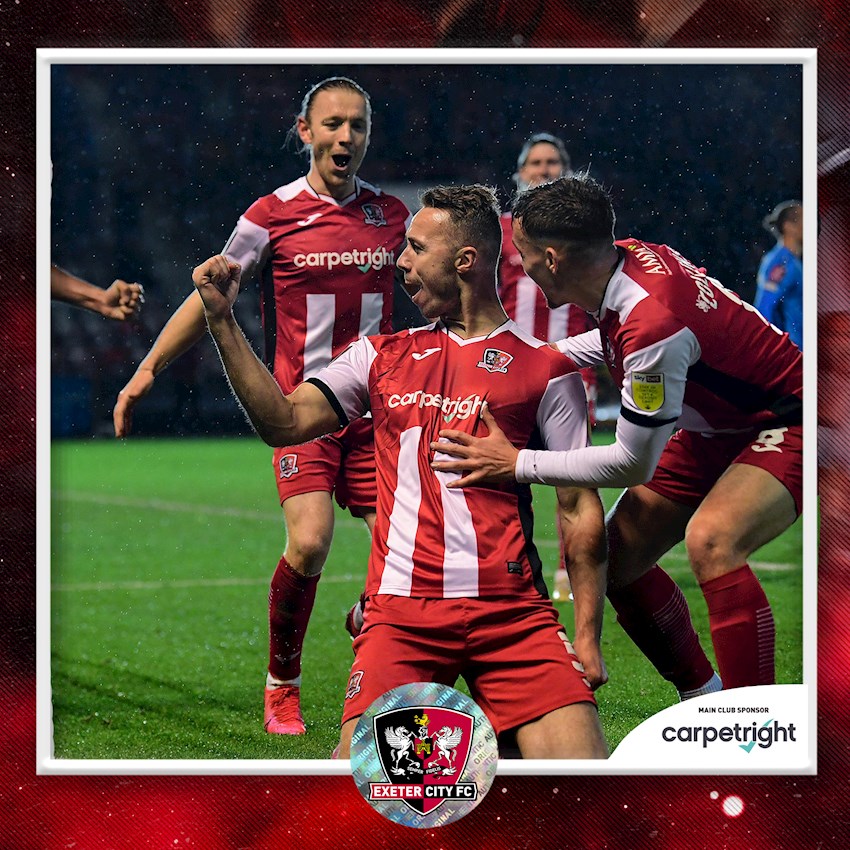 The game etched on a knife edge and Theo Robinson gained space behind the Exeter defence, but his low ball across the box was targetless.

Sam Nombe almost made the passage safe as he raced onto a Matt Jay through ball but could only guide his shot over the bar.

Exeter saw out the final exchanges of injury time and will look forward to a trip to the Abbey Stadium on Saturday to face Cambridge in the second round.