Exeter City scored a dramatic last-minute winner to see off Salford City, in an exciting game at the Peninsula Stadium.

Jake Caprice's last-minute effort crashed the inside of the post and deflected off Ammies goalkeeper Connor Ripley to ensure the Grecians left Greater Manchester now unbeaten in 15.

Matt Jay had put the visitor’s ahead early into the Second half with his fifth goal in as many games before Tom Elliott powered home Salford’s equaliser.

Cameron Dawson made an impossible save to keep the Salford score line down as the 472 City fans travel back to Devon in sheer jubilation.

Exeter survived the first scare though. A short corner in the opening minutes was soon delivered high into the Grecians box and Matty Willock rose highest to only head wide.

The game opened up in the tenth minute. Salford sent a switch to the left-hand side and Ibou Touray’s low drive caused confusion in the Exeter box.

The boys in pink manged to sweep the ball left for Jake Caprice, who left his man for dust and sent Sam Nombe charging at goal. The City number 10 shifted the ball onto his right foot and forced a fine save from Connor Ripley in the Salford net.

It was the home side who saw the clearest sight of goal three minutes later. Josh Morris snuck around the back but failed to hit the target.

City almost found the breakthrough on 14 minutes. Cap and Brown combined down the left for the latter to cross. Ripley’s flap fell to Josh Key following up. A dangerous ball across the box was narrowly diverted wide by the Salford defender.

Pierce Sweeney was soon on hand to spare Cam Dawson’s blushes. Brandon Thomas-Asante rounded the Exeter keeper, but there was Sweens to block the striker’s effort on the line.

Exeter could’ve taken the lead on 26 minutes. George Ray’s downward header looked to settle in the bottom corner, but Nombe was unlucky to not be able to get out of the path of the ball in time.

Jevani Brown had a decent chance to open the scoring on 35 minutes. Strike partner Nombe’s tencity won the ball on the edge of the Salford box, but as the nut fell to Brown the number 20’s shot was well stopped by Ripley.

Thomas-Asante blazed over and Tom Elliott was unable to connect to a low Liam Shephard cross as Salford looked to get a foothold though as any momentum was built, referee John Busby blew the halftime whistle.

It took eight minutes of the second half for Exeter City to edge their nose in front and who else but Matt Jay… AGAIN! 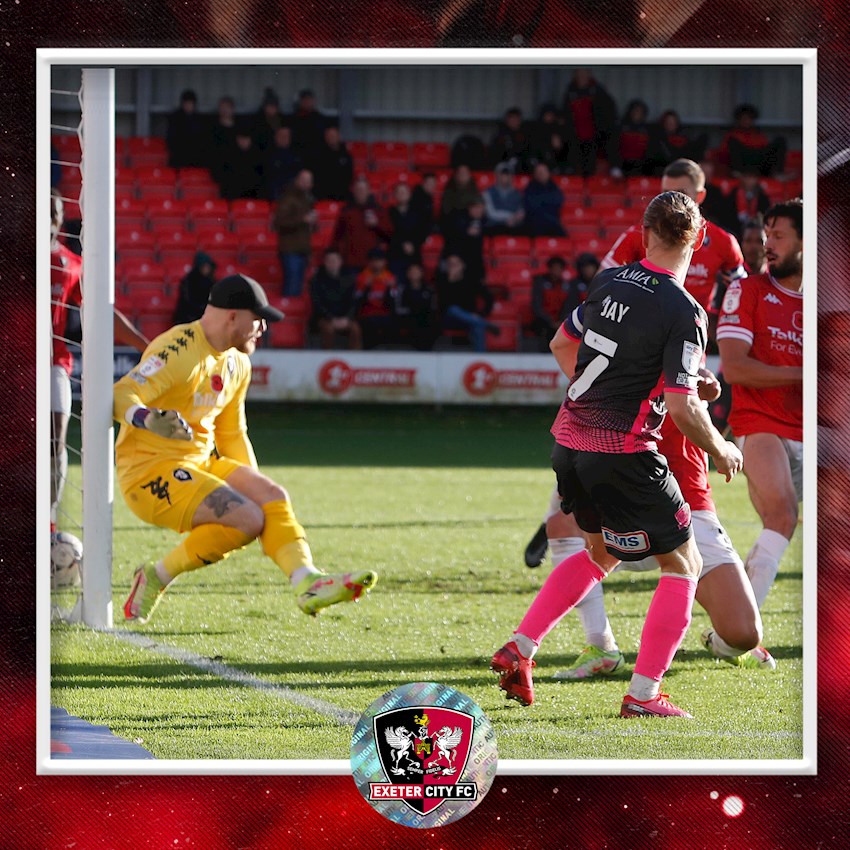 Jevani Brown capitalised on some hesitancy in the Salford back line. A pass across the face squeezed through to the captain at the back post. Liam Shephard cropped up with the most miraculous last ditch on the line to block MJ’s first effort, but unfortunately for the Salford defender the ball fell back to the man who’s now scored in the last five consecutive games! Jubilation in the away end.

And it was almost two straight after. City took a free kick short, and MJ went for goal from range. The ball ricocheted to Brown with the near post open, but Touray was able to get across and charge down the chance. 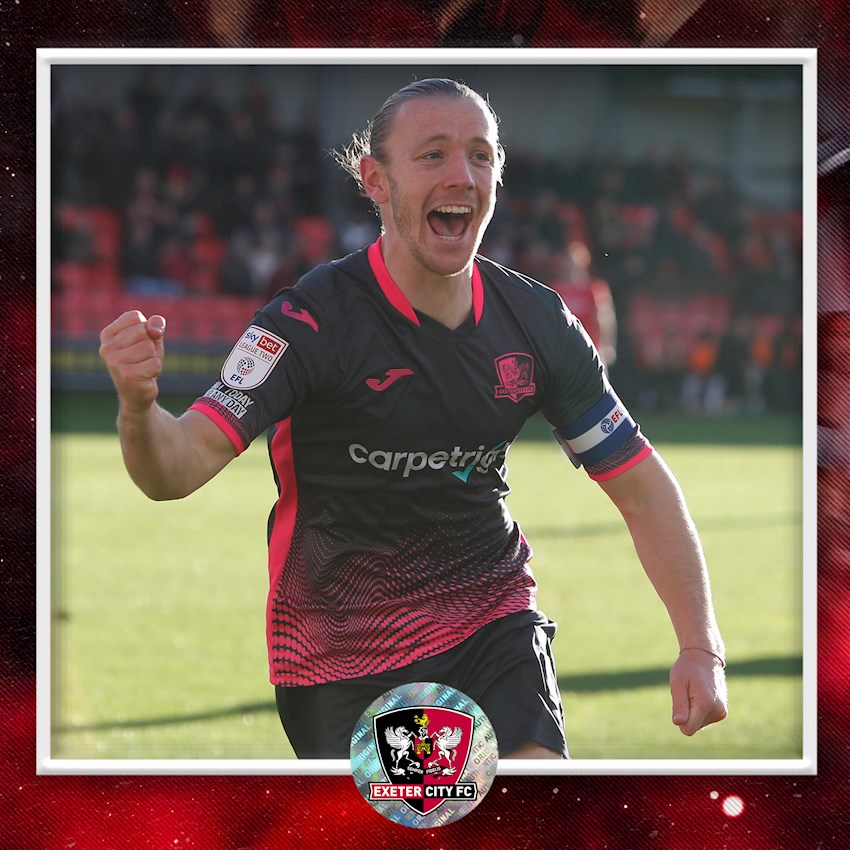 The goal settled the sides and the game began to slow but Cameron Dawson picked out an absolute worldie of a save to keep the Grecians ahead.

In a rare counterattack the Ammies worked the ball forward with the City defence stretched. Matty Lund squared the ball to Thomas-Asante at the back post with two yards between him and the goal. Dawson made up the width of the goal and then some to get across and claw it away. Breath-taking save.

Dawson again was on hand to bat away a Josh Morris strike as the home side had a spell on top. And they made the pressure pay on 80 minutes.

Jake Caprice was agonisingly close to putting City back in front with a piledriver. The wingback cut onto his right foot on the corner of the box and powered one towards the top corner. Ripley was beaten but the crossbar was Cap’s nemesis. So unlucky!

Elliott again used his supreme height as he latched onto Touray’s cross in the 90th minute. He got too much on the header and it sailed over.

You know that Jake Caprice effort mentioned earlier? Well. How do you win a game deep into injury time? Step up the beautiful full-back and his wicked right foot!

Podge Amond was sent on his way through one-on-one with Ripley. The keeper stood firm and the ball fell nicely to Cap on the edge. His sighter ten minutes earlier was clearly in his mind as he let fly again.

His whipped, swept and dipping shot crashed off the inside of the post a slight deflection off the scrambling Ripley and into the net. Absolute carnage from the brilliant 472 travelling Grecians and the boys left Salford with all three points on a memorable afternoon at the Peninsula Stadium.

Next up for the Grecians is an enticing FA Cup fixture with Bradford City.