Nombe’s second goal in as many games cancelled out Luke Molyneux’s early strike as the Grecians ended Pools’ 100% home record and in turn extended their own unbeaten run to seven.

Molyneux cut inside and curled home after 25 minutes as Pools dominated much of the possession. Five minutes before the break, Nombe restored parity with a deft flick at the far post, to please the 187 travelling supporters.

Jake Caprice came within whiskers of scoring his first goal of the campaign, firing just wide in the second half, but neither side could really find an opening to take home all three points.

Matt Taylor made one solitary change from last week’s win over Sutton. Kyle Taylor earned his first start for City as Harry Kite took his place on the bench.

Within two minutes Jevani Brown was able to meet a Josh Key cross but was unable to threaten Ben Killip in the Pools goal.

Buoyed on by the very vocal home crowd Hartlepool had the better of the opening stages.

Mark Shelton flicked on a corner at the near post on eight minutes. On Nine, Jamie Sterry almost fluked Pools ahead when his deflected cross landed on the roof of the net.

From the resulting corner Neil Byrne headed into Cam Dawson’s grasp as pressure mounted on the Grecians.

And on 25 minutes Pools found the breakthrough. Luke Molyneux received the ball on the half turn. From the edge of the box, he shifted onto his left foot and found the bottom corner. 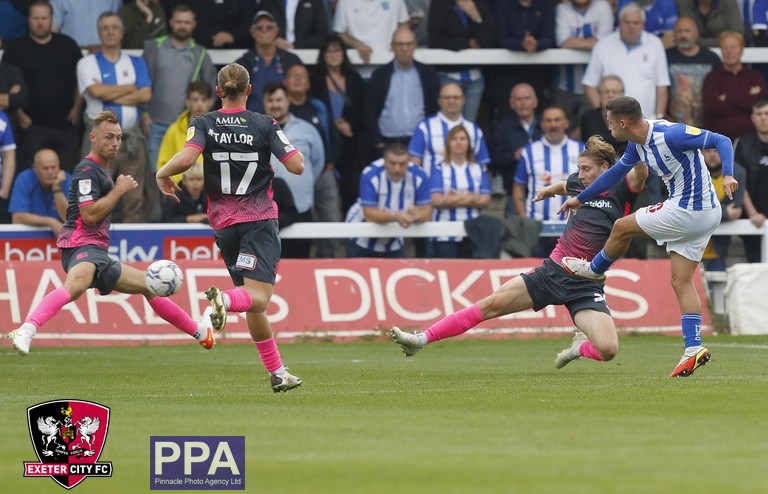 The goal seemingly sharpened up City though and Sam Nombe had Exeter’s first real sight of goal on the half hour mark. Matt Jay and Jevani Brown exchanged intricate passes on the edge. The latter threaded Nombe through one-on-one but the number 10 could only fire over.

City grew in confidence. Jake Caprice whipped a lovely ball to the far post which was scooped away for a corner. Resultantly, Pierce Sweeney threw a leg at the half-cleared set piece but saw it nestle tamely into the side netting.

City’s patience told and the visitors were level five minutes before the break!

Jay and Brown again dictated the tempo around the Pools box. Looking for a way through, Caprice peeled off and delivered a peach of a ball onto Nombe’s head for his second goal in as many games! His faint flicked finish forced a frenzy from the frantic City faithful. 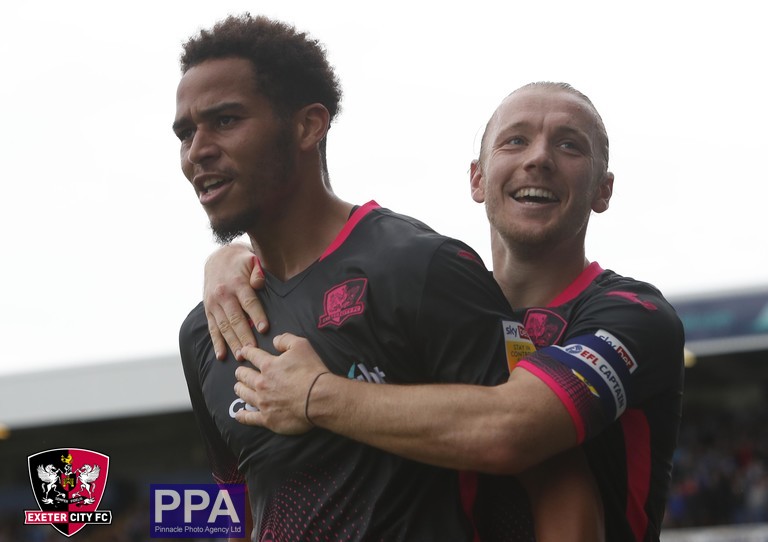 After the interval Brown managed to get a shot of his own at goal, though his left footed curler was comfortable for Killip. Josh Key also went for goal in the same vein only to see his effort sail wide.

City almost found a way through as Caprice found himself with space in the Pools box. His pull back was just behind Matt Jay and the chance was blown. The manager turned to his bench and Archie Collins was welcomed back for his first minutes of the season.

Pools were mightily close to restoring their lead on the hour. Molyneux broke free on the right-hand side and sent in a low ball across the face of goal. All Mike Fondop needed was a touch but fortunately for City, none was coming.

Sweeney had to be on hand to stop another dangerous ball in from Sterry, as momentum started to shift in Pools’ favour. Matt Daly soon tested Dawson from range. 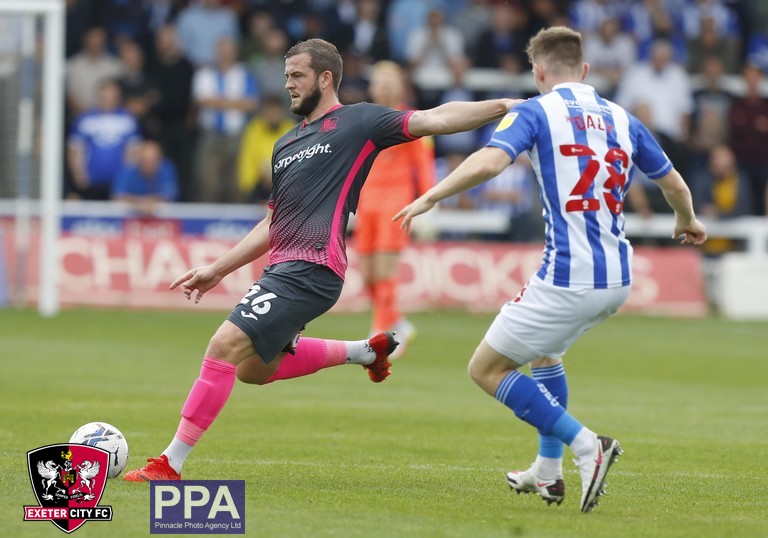 Caprice was finding some joy down the left again. After Nigel Atangana sprayed the ball wide, in true Cap style, the wing-back stepped over cut inside and skimmed the far post with his shot.

Neither side could muster a dramatic late winner and the Grecians left Teesside with a valuable point. Walsall travel to Devon next week as City look to continue this unbeaten run.