Exeter City saw off a brave effort from Plymouth Marjon, progressing into round two of the Devon St Luke’s Bowl with a 2-0 win.

On a cold, blustery, windy night in Plymouth, Chad Gribble’s boys came into the encounter having just seen off Plymouth Argyle on penalties on Saturday in the Youth Alliance Cup, while their opponents had won five, lost five and drawn one of their first 11 league games, scoring 21 goals in the process. No mistake was to be made that Marjon were here to compete, and play hard.

Exeter started with early attacking intent, Mitch Beardmore causing concerns for Marjon down the left side, before Charlie Hanson’s ball was well cleared out by Lewis Jago. Marjon looked under enormous pressure inside the first four minutes, often struggling to find an out ball.

Some good strength from Reece Brown, Marjon’s top scorer on seven this campaign, was a minor test early doors along with his pace, but he was extremely well shepherded by a well-drilled City defence.

Some good work down the right side troubled young left back Lewis Jago, but Charlie Hanson’s cross connected with the side netting only.

Down the other end, Theo Ramsey found himself in space, only for his effort to sail over Harry Lee’s bar.

Joe O’Conor then played a lovely ball up to Sonny Cox, but Gabe Smietana rushed out quickly to thwart his progress.

With 13 minutes on the clock, City got their breakthrough; Eli Collins expertly cut inside, and drilled a fabulous strike into the bottom corner, giving Exeter a deserved lead in a game they had thus far dominated.

They almost bagged a second just a few moments later. Charlie Hanson’s effort was expertly stopped by Smietanka, before a City penalty appeal was waved away – the barrage looked to be on its way.

Down the other end, Jake Taylor Lewis chased a ball over the top, but Toby Nevile came across and snuffed out the danger, with Harry Lee darting off his line.

A City corner on 17 minutes was almost turned in for an own goal, but for the goal line heroics of Dylan Peters, as City incrementally pushed for a second. Lewis Jago, however, showed real industry down the left side for Marjon, forcing Charlie Hanson to retreat and execute some fine defending.

City came right back and, following a foul on O’Connor, Mitch Beardmore’s delivery was met by Charlie Hanson, whose header drifted just wide. Theo Ramsey and Reece Brown displayed some nice interplay and tenacity, but Toby Nevile dealt with the threat consummately. The young centre half would then make his way up the other end, heading agonisingly wide from Beardmore’s corner. He was then on hand again to block a fierce strike from Lewis Smith.

City would then have another opportunity – Harrison King’s ball only just evading Max Edgecombe at the far post. A sloppy pass from the back then allowed Hanson in, but his strike was well blocked by Andy South.

Sonny Cox was kept relatively quiet in the opening 45, but he superbly took down a throw, and his volley was fielded nicely by Smietanka. The keeper than gave a sloppy pass to Charlie Hanson, but Andy South was again on hand to make an excellent block. Michael Lilley then powered an effort just over the bar, as Marjon continued to look rattled by City.

Taylor Lewis found himself in following a super ball by Jago on 38 minutes, and his effort rolled narrowly past Lee’s back stick, as City were reminded that defensive lapses would be punished.

Marjon had a decent opportunity from a free kick, but it was lashed well over by skipper Adam Smietanka. Brown was again lively down the left, but this time it was Harrison King’s turn to challenge him well and snuff out the attack.

Max Edgecombe was set away by Mitch Beardmore, only for his cross to evade everyone and almost nestle itself in the far corner. Hanson worked his way into the box, sbefore his effort was deflected wide. The resulting corner was flapped at by Smietanka, before Neville’s strike was well defended.

City made a solid start to the second half, moving the ball well refusing to relent following their opening period of dominance. A Beardmore free kick again caused issues, and Dan Yeoman had to scramble clear.

Lewis Jago then marauded forward for Marjon, seeing his strike well held down low by Lee. Taylor Lewis was set away by Brown, whose ball in was too close to the City keeper – Marjon were beginning to apply some pressure to the young Grecians.

Sonny Cox skipped through a couple of challenges, before seeing his effort deflected into the arms of the keeper, with the beginning of the second half looking more competitive than the first. He then nearly latched onto O’Connor’s cross, but more brilliant defending from South denied him the opportunity.

Exeter persisted, and won a corner through an excellent run down the left from Edgecombe, before Yeoman got his head in the way of Nevile’s towering effort. Michael Lilley then unleashed another piledriver, which was blocked by Travis Skerton. From the resulting corner, Nevile placed another header just wide. The defender, in truth, could have had a hattrick from set pieces.

City would then have their best second half chance yet. Mitch Beardmore orked his way into the area, squared to Hanson, but the forward’s effort flew over from 12 yards. The referee then turned down a penalty shout turned down when Joe Wragg ball found its way to King, who looked as though he was fouled, but the official ruled nothing doing. Cox then stung the palms of Smietanka, as City finished strong.

As Marjon threw everything at it, Smietanka came up for a set piece, and City broke away. Collins played in Sonny Cox, who rolled into an empty net for two.

Michael Lilley, Mitch Beardmore and Toby Nevile were among a plethora of stunning performances for an Exeter side that knew this 4G surface would be a tough place to come, and they will have surely caught the eye of boss Matt Taylor. 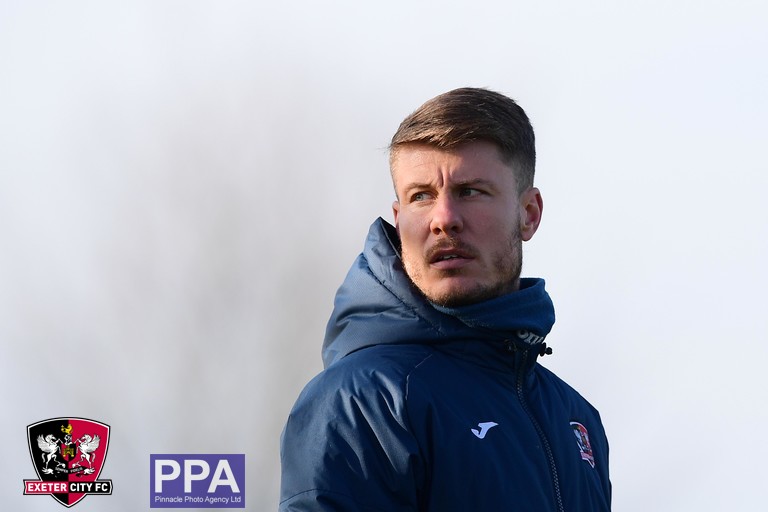 Boss Chad Gribble was pleased with his young side’s display against a tough opponent.

"The most important thing was qualifying for the next round and earning an opportunity," he said.

"Marjon made that difficult for us at times in the way they set up, and in the way they played. But it’s really great to come through it with a clean sheet and two goals, and I thought it was deserved.

"There were certainly elements of the performance that we want the players to be better with, and if they are to get to the levels they aspire to get to they need to have those moments more often.

"The biggest thing we asked of the players at the start of the game was to do what it needs and get yourselves in the next round to earn another opportunity and they’ve done that so we’re pleased for that reason.”

In terms of City’s chances of retaining the cup, Gribble’s main aim is that the young Grecians will have more opportunities to impress in the cup.

“The biggest thing for this competition is it presents the players with opportunities to play again senior opposition." he added.

"That’s ultimately what they’re striving to do, and like with any cup competition, you go an extra round and you usually get a tougher opponent. Whoever that might be, we are looking forward to testing ourselves against senior opposition.

"This is a game we were really looking forward to tonight, and that the players really embraced. We saw that in our performance and the way we went about our game tonight, so we trust in our way.