Exeter face North London side Barnet FC tomorrow as the Grecians bow out for 2017 at home. After the abandonment of the match against Forest Green on Boxing Day, City will be hoping to regain lost ground on promotion rivals ahead of what will surely be an exciting second half of the season in 2018.

Man behind the Mask Dan Gottschalk takes a look at Exeter’s opponents as Barnet themselves seek to pick up points and avoid slipping into the relegation zone for the start of the New Year.

Hailing from North London, Barnet boast a long and rich history. Being founded in 1888, the club is approaching 130 years in existence and has had its fair share of ups and downs just as many others at this level have experienced.

Originally being founded as Chipping Barnet in 1888, the Bees were formed by a group of graduated academics from the local Cowley College and Lyonsdown Collegiate schools. In 1892, having played friendly matches with local sides for a number of years, the club joined the amateur North London League and played there until competing in the Athenian League after the turn of the century.

By this time, Barnet had found a permanent home, at the Underhill ground, where they would stay until moving into their current ground, the Hive, in 2013.

In October of 1946, Barnet were involved in the first live televised match on television in their home clash against Wealdstone. Being aired on the BBC, 20 minutes of the first half were shown as well as 35 minutes of the second before filming had to stop because conditions meant that it was too dark to continue screening on television. 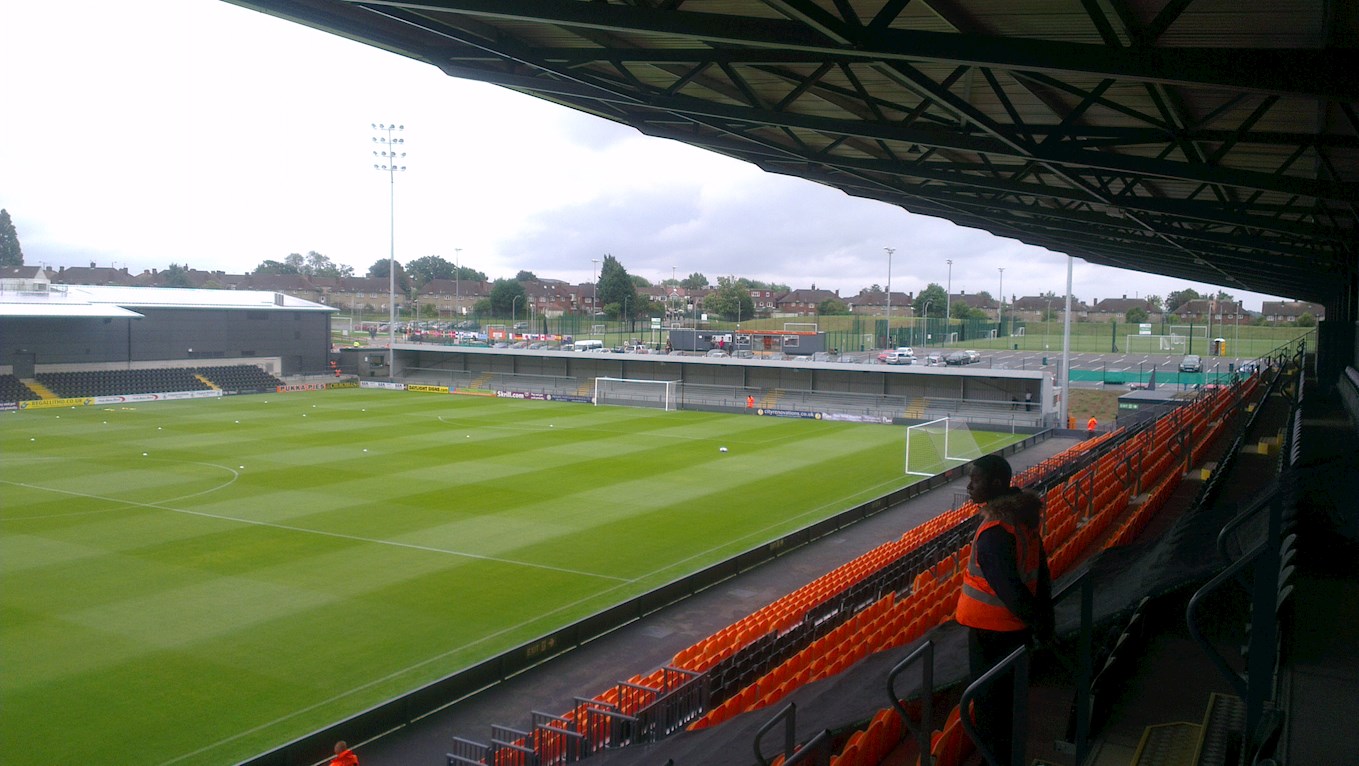 A year later in 1947, Barnet hosted winners of the Hong Kong League, Sing Tao Sports Club, beating them 5-3 in a game which marked the first visit of a Chinese football club to the UK.

Barnet enjoyed some success in the Athenian League and participated in the competition for over 50 years, winning the title no less than seven times before eventually deciding to become semi-professional and join the Southern League Division One.

A few years later, Barnet played one of their finest footballing years in their history, using just 15 players over 80 matches, earning a trip to Wembley in the final of the FA Trophy and capping off the season by winning the Southern League Cup. Success was short lived however and in 1975, the Bees were relegated from the Southern League Premier Division.

At the end of the decade, Barnet would join the Alliance Premier League, a league which would later be known as the Football Conference and after finishing as runners up in the league in 1986, Barnet won the league, and promotion to the Football League in 1991.

Life in the Football League started well for Barnet and the club reached the play-offs in their first season of participation in Division Four, eventually losing to Barnet in the semi-finals only to finish third the following season and be promoted to the renamed Division Two.

Having lost most of their playing squad due to financial controversy at the start of the 1993/94 season, Barnet found life in Division Two tough and finished bottom of the league and amassed just 28 points, their lowest tally in over 35 years.

During the 2000/01 season, the Bees brought in former Premier League star Tony Cottee, the player taking over management of the side after manager John Still was removed from his post to become a director at the club.

Barnet made a promising start to life under Cottee, winning his first game in charge but after a poor run of form, the club were eventually relegated at the end of the season back out of the Football League and to the Conference.

Life in the Conference for Barnet was harder than some would have anticipated and it would take four seasons for the club to return to the football league by winning the Conference in 2005, finishing 12 points clear of second placed Hereford.

On returning to the Football League, the Bees consolidated their league position over a number of years despite having to wait for the final day to secure their Football League status for a third year in a row at the end of the 2011/12 season.

The start of the 2012/13 season looked much brighter for Barnet. They were due to leave their Underhill ground after 106 years and move into The Hive, a brand new stadium at the end of the season and marked this landmark season by signing former international and legend of the game Edgar Davids as player and joint manager.

The season didn’t end well however, with Barnet being relegated back to the Conference with a total of 51 points, the highest points total to ever be relegated from the Football League.

It didn’t take Barnet long top return to League Two however, winning the conference in 2015 to secure promotion back to the Football League. Life in League Two was a bit more stable for Barnet in the past couple of years and the club has achieved successive 15th place finishes to set themselves up well for the Football League in the future.

Last season, Barnet were enjoying their second year in League Two since being relegated under Edgar Davids in 2013.

The 2016/17 season was a stable campaign for the North London side who never really looked like dropping out of the Football League and who could really cause teams problems on their day.

Despite a bottom half finish for the Bees, there were some major positives for Barnet from last term, none less than the scoring form of powerhouse upfront John Akinde, the striker finishing the campaign having scored 26 goals.

Barnet fans will also remember a good run of form last season, stretching from the end of October for the start of January, the club losing just twice in 13 games, including a double over City’s rivals Plymouth Argyle.

As good as this run was for the Bees however, it eventually came to an end and in the final 21 games of the season, Barnet managed to secure just 18 points, eventually seeing them to a respectable 15th place finish.

John Akinde
Akinde is one of the most lethal strikers in the league and scored in bother of Barnet’s fixtures against Exeter last season.

Originally coming through Tottenham’s academy, Akinde untilmately failed to make it as a professional footballer with Spurs and made his professional debut for Gravesend & Northfleet in 2006.

Akinde holds the unconventional record of being the first ever football transfer to be decided by a fan poll when Bristol City signed him in 2008 from Ebbsfleet United. The striker struggled to find his feet in Bristol however and had a string of clubs before signing for Barnet in 2014, since scoring over 80 times for the Bees 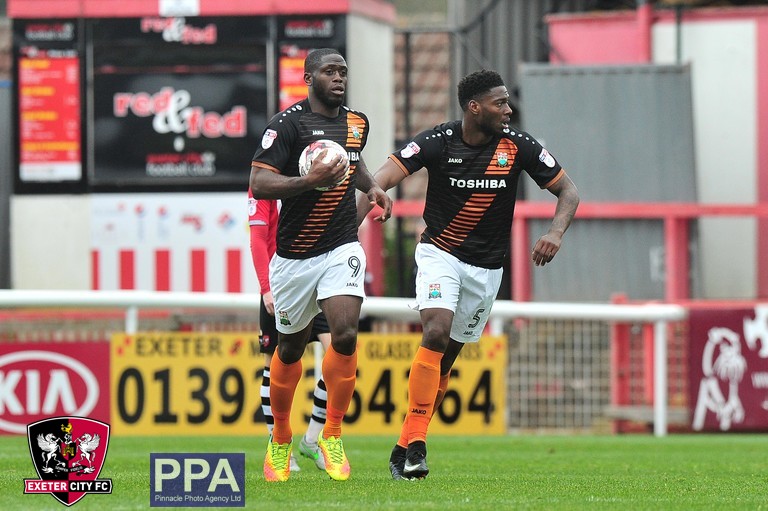 Like Akinde, Shaq Coulthirst came through the academy at Tottenham but never made a professional appearance for the club.

After a number of loan moves, Coulthirst signed for Peterborough before joining Barnet at the start of this season and has made a scoring start to his time at the North London side, including a goal against City in the match at the Hive earlier this season. 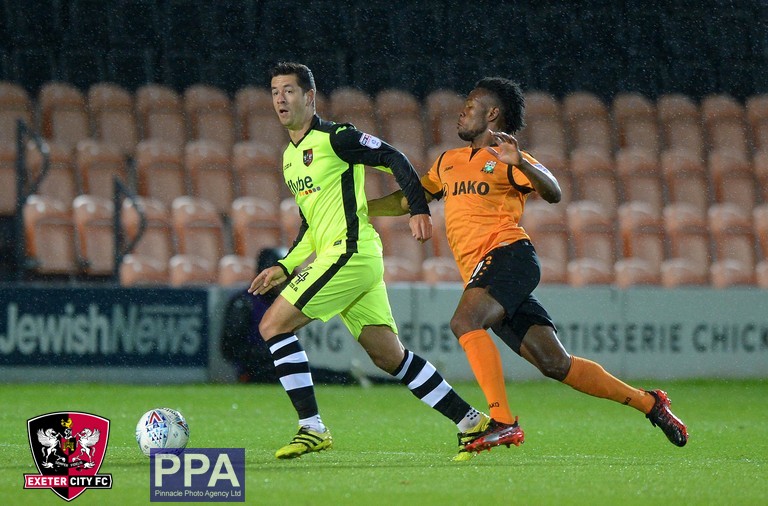 Earlier this season, City dug deep in the second half to take all three points under the floodlights against a defiant Barnet side.

After going in 0-0 at half time, Barnet struck early on in the second half to take the lead but a Rueben Reid goal and a stoppage time winner from Jayden Stockley, his first since returning to the club, sealed all three points for the Grecians.

The last time the two sides met at St James Park also ended 2-1 in favour of the Grecians, skipper Jordan Moor-Taylor and last season’s top scorer David Wheeler giving city an early 2-0 lead before Akinde pulled one back for Barnet in a spirited second half performance for the Bees.

City held on however for all three points in an incredible march to the play-off final at Wembley. 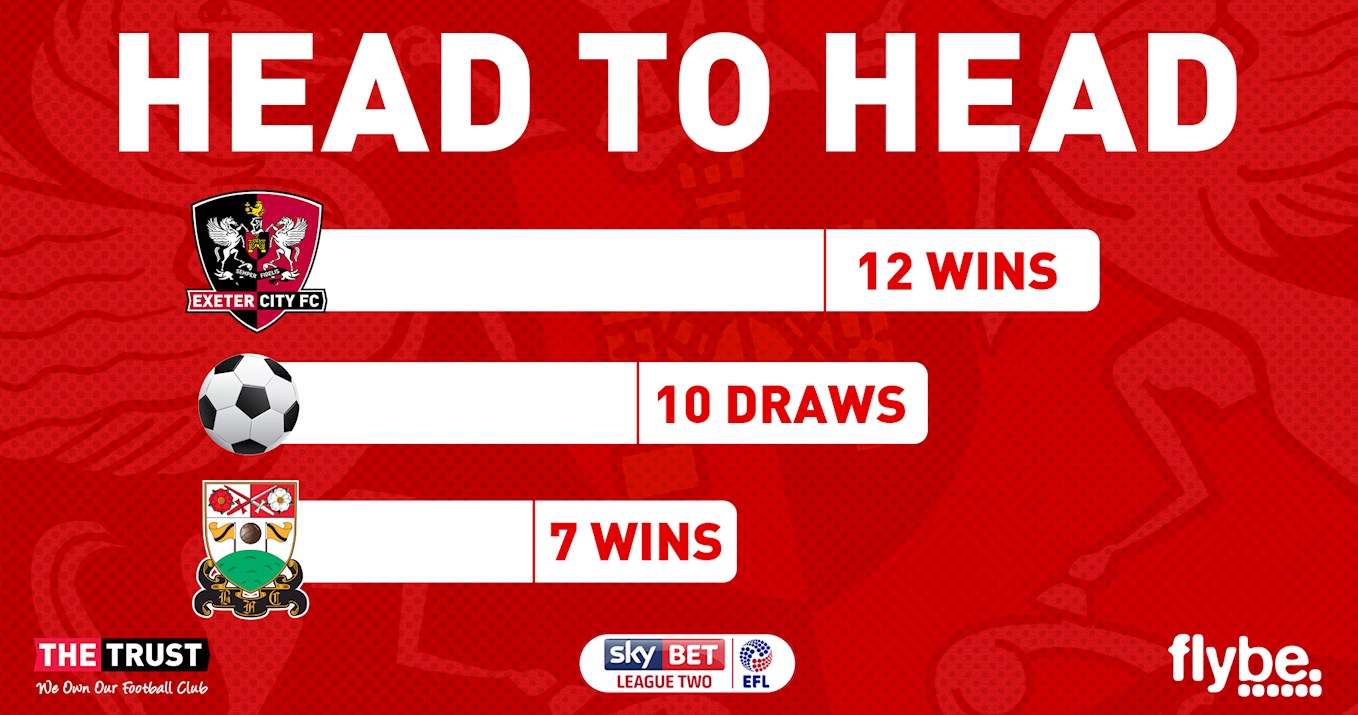 Tickets:
The IP Office Main Stand has once more sold out, but there is standing space available in the Thatchers' Big Bank, the largest standing terrace in the football league.