Exeter City play Heybridge Swifts in the Emirates FA Cup first round on Sunday. The match has been moved to a 2pm kick-off so highlights can be shown on BBC Final Score programme on Sunday afternoon.

Heybridge Swifts come into the match on Sunday having already played seven games in the competition. They started off in the preliminary qualifying round stages, where they beat Haverhill Rovers 6-1 in a replay, before knocking out Arlesley Rovers, Metropolitan Police, Frome Town and Haringey Borough.

Speaking about their journey, City manager Paul Tisdale said: “We are playing against a non-league team who have done very, very well to get to this point. I had achieved that myself in the non-league with Team Bath in 2002.

"So, it is an amazing achievement and they won’t want to see their dream and excitement finish this Sunday. They will look to take it to another game or a replay, but we have got to make sure we do the best for us and the best for us is a professional performance. It is not about anything sexy, it is about winning the game.”

There are still tickets available for the IP Office Stand and the Thatchers Big Bank. You can purchase in advance by clicking on the following link and the picking up your pre-purchased ticket from the ticket booth in Red Square on Sunday.

Exeter City are delighted to welcome Heavitree Brewery to the game as match sponsors of our match with Heybridge Swifts.

Thinking of running your own pub? Heavitree Brewery would like to hear from you. Just telephone 01392 217733 and ask to speak to either Terry, Ryan or Hugh in the tenancy team. For more information on Heavitree Brewery click here. Our ball sponsors for today’s match are St Austell Brewery and the Exeter City club board. For more information on St Austell Brewery click here.

Matt Jay is the feature interview in Sunday's matchday programme as he discusses his career with the Grecians so far and his determination to break into the starting XI on a more regular basis. Dave Pullar takes on the first, best and worst quiz while there is all the usual info on our opponents Heybridge Swifs.

You can pick up a copy of the matchday programme for £3 from the club shop and around the ground.

There are 12 mascots for Sunday's game with Heybridge Swifts. They are as follows: Tyler Langdon, Nick Agnew, Zak Hartshorn, George Glenn, George Moullaris, Alfie Pym, Emily Palmer, Ashton Cook, Ethan Board, Charlie King, Kai Taylor and Oceana Holwell. You can read their profiles on page 41 of the matchday programme. 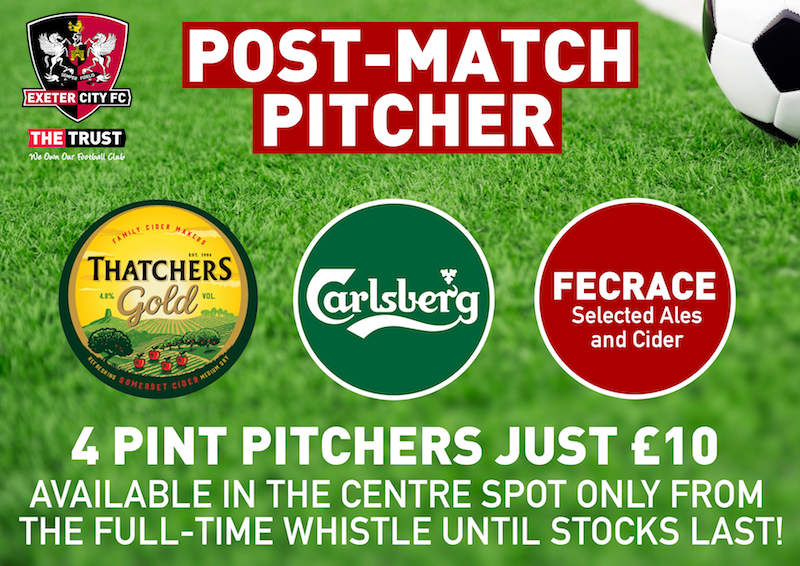 Special drinks offers available in the Centre Spot bar straight after the final whistle on Sunday. Why not stay and watch Chelsea take on Man Utd?