Voting for the 2017/18 Exeter City fans’ player of the season award, sponsored by Hawksmoor Investment Management is open until 5pm TODAY, (Friday, April 27).

The season has proved to be another eventful one for the Grecians, with the team sitting in the play-off places with four to go, with eyes still on automatic promotion.

All City players who have played for the first team are up for nomination, including those on loan. 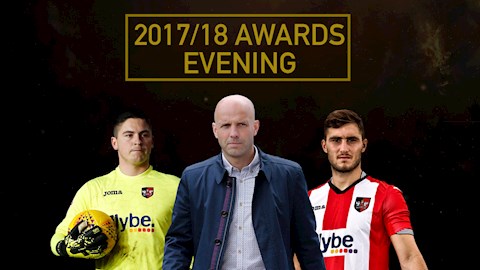 Last season, top scorer David Wheeler scooped the award, there have been many stand-out performances among this season’s talented squad, who has caught your eye?

The winner will be announced, and a formal presentation will take place at the awards evening on Sunday, April 29 at the Great Hall at Exeter University. The award will be presented on the pitch, in front of the fans at the final home match of the regular season, against Colchester United on Saturday, May 5.

To vote, please make your selection on the form below, or visit: http://ecfc.co/POTS18. Votes can also be made in person at the St James Park reception.

Create your own user feedback survey

The deadline for voting is Friday, April 27 at 5pm.

All entries will be entered into a random draw, with one lucky voter winning a pair of tickets to the 2017/18 Awards Evening on Sunday, April 29, and the opportunity to have their photo taken with the winner!