Matt Jay is hoping the spirit in the Exeter City camp can help guide them to a successful finish to the Sky Bet League Two season.

The Grecians are just one point off the automatic promotion places with just two matches remaining this season, and Matt feels that the togetherness in the squad could make a real difference as the Grecians look to take maximum points from their games with Stevenage and Colchester United.

He said: “This year’s squad is very good. We’ve got a good mix of players of different ages and we’ve gelled really well together. Hopefully in the last two games we can be more together than ever and pull through.

“It’s come down to the last couple of games. We have to try and win both matches, that’s all we can do.”

Matt also says the Grecians will be wary of the Stevenage threat on Saturday. As a team in mid-table who have comfortably secured their place in League Two next season, but aren’t necessarily pushing for promotion, they will still be determined to win all three points and put up a stern test for City, as did Crawley Town in the 2-2 draw last weekend.

He continued: “It’s a difficult test. They’ve got the so called ‘nothing to play for’ but they will because they will want to win the game. They’ve obviously got their own targets to meet, which they will want to do. We’ll have a good look at them, and they will us, so I think it’s going to be another tough test.”

The 22-year-old has enjoyed an impressive spell in the first team alongside Jayden Stockley in the City attack recently, and Matt admits he is keen to keep his place in the team and continue to contribute. 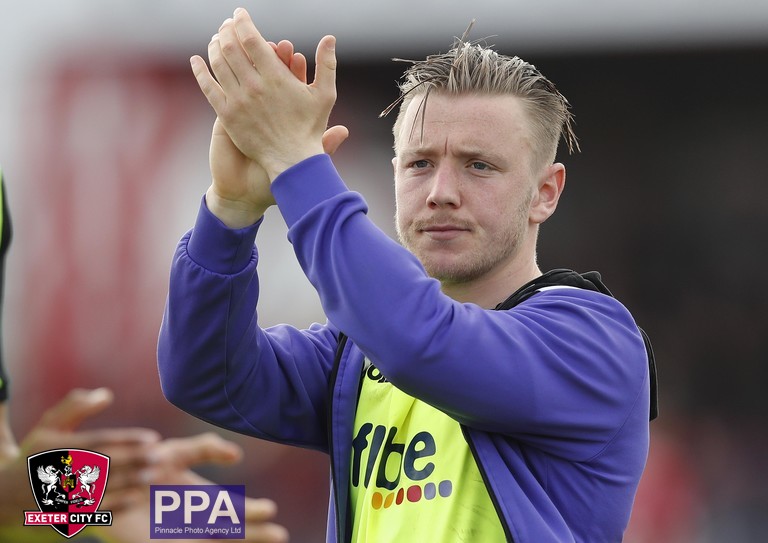 Matt Jay has featured heavily in recent weeks and netted his first league goal against Cambridge United on April 7.

“It’s great to be playing.” Matt said: “Of course, that’s what you want to do. I’ve just got to take it game by game, week by week, and try and improve all the time. It’s important to take things from the games, learn from them and speak to people about my game to keep pushing on.

“You get judged on what you do. It’s not always about scoring, it’s about contributing to the team and I feel like I’m doing that. The whole squad has been contributing. As long as I’m doing the right things that’s all I can do.”

Matt also praised the City fans for their support for him, and thinks their role in the coming two matches could prove vital in the end of season run in.

He said: “The fans have been really good to me and it helps so much. All the lads in the dressing room would say the same thing. They’ve got better and better since the season has gone on and they’ve helped us through the games when we are down, or in the last five or 10 minutes when we have to kick on. Hopefully the trip to Stevenage will bring a lot of fans and we can get the result for them and for us.”