On this day, April 20, one hundred years ago, one of our club’s first-ever professionals, Joe Bulcock, was killed in action in France.

Attached to the 9th Battalion Welsh Regiment, he’d enlisted in Swansea where he’d been playing for the local team. Service in France began in the autumn of 1917. He was 38 when he died, and he’d been in the army two years. 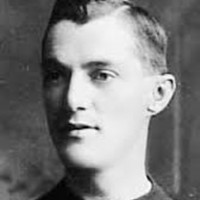 Joe was a Burnley lad. After catching the eye in local football, he had a trial at Villa Park, and later twice had spells at Bury. City boss Arthur Chadwick persuaded him to move south in the close season of 1908. The Grecians had just turned professional, and Chadwick was building a team from scratch to compete in the Southern League.

After a season at St James Park, during which he made 23 appearances, Joe was signed by Crystal Palace. While in London, he was selected for the F.A. tour to South Africa in 1910. We’re told he was a ‘reliable, cool, and decisive defender’.

He will never be forgotten.