“I think without Eamonn I would have had a very different path in my football career, so I do owe him an awful lot."

Eamonn Dolan – it is a name that will be forever etched in the heart of Exeter City football club.

The player, turned youth coach, turned manager, was there for City in its darkest hour when relegation from the Football League in 2003 put the club on the brink of financial ruin.

He, as the first manager under Supporter Trust ownership, helped guide the Grecians to stability on and off the pitch.

So, it was a very emotional day when he passed away at the age of 48 in the summer of 2016 for everyone connected with the club.

However, that emotion was perhaps heightened for Jake Taylor. The Ascot-born midfielder, whose quote from the autumn of 2016 heads this article, first met Eamonn at the age of 16 when he was part of the youth setup at Reading.

Eamonn was academy manager at the Royals at the time and helped Jake break into the first team at the Madejski Stadium before securing him a loan move to Exeter where he made his first extended breakthrough in the Football League with 30 League One appearances for the Grecians in the 2011/12 season.

Less successful loan moves at Cheltenham Town, Crawley Town, Leyton Orient and Motherwell would follow, before Jake would put pen to paper on a permanent contract at St James Park in January 2016.

Now, heading into the 2018/19 season, Jake is a key fixture in the Exeter City team with more than 100 appearances under his belt. And yesterday – against Carlisle United – he led the side out as permanent captain for the first time. 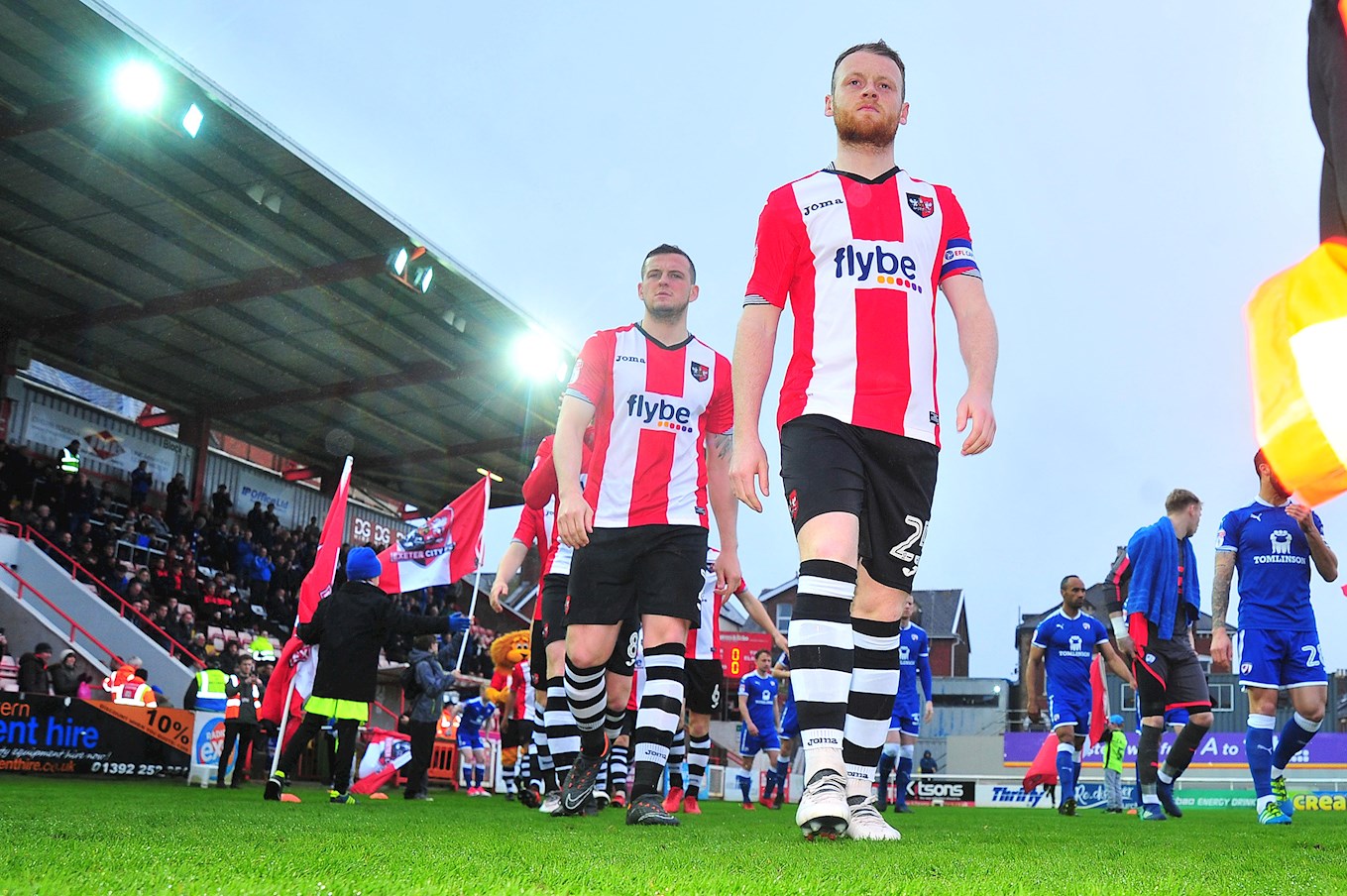 Jake Taylor leading the team out as vice-captain last season

Considering his, and Eamo's links to Exeter, it was a heart-warming moment.

Speaking ahead of the game with Carlisle, Jake said: “It is a massive honour (to be chosen as captain). Exeter City is a club that has done a lot for me. I was down here on loan six years ago from Reading and Eamonn was the connection that brought me here.

“The connection he has got with this club makes it a really proud moment and I am really looking forward to leading the team out.”

However, despite being a popular appointment as captain based on the reasons above, Jake is also deserving of the responsibility that has now been entrusted to him. So what does Jake think makes a good captain?

“I think there are lot of different things,” he said. “Obviously leadership and making sure everyone is in good spirits around the place is important and being that bridge between the manager and the players as well. 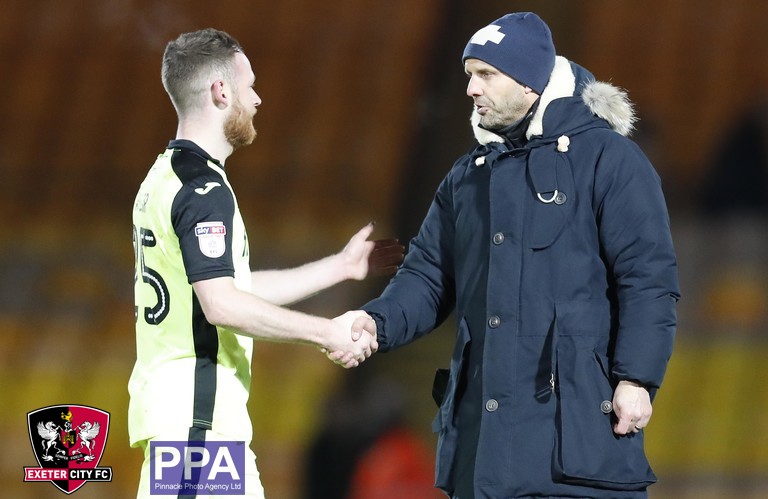 Manager Matt Taylor is convinced Jake can do a good job as well, describing him as the ‘perfect choice’ for the role. He added that the midfielder ‘leads by example in the way he plays and the way he trains’ and is someone who he can see ‘playing regularly’.

Jake’s statistics from the last two seasons certainly back up that theory. Last campaign he made 54 appearances, more than any other outfield player, and the campaign before he turned out 51 times. So, how pleased is Jake with the amount of game time he is getting?

“I just want to play as much as possible in a team that is doing really well and hopefully this season I can continue to do that.” 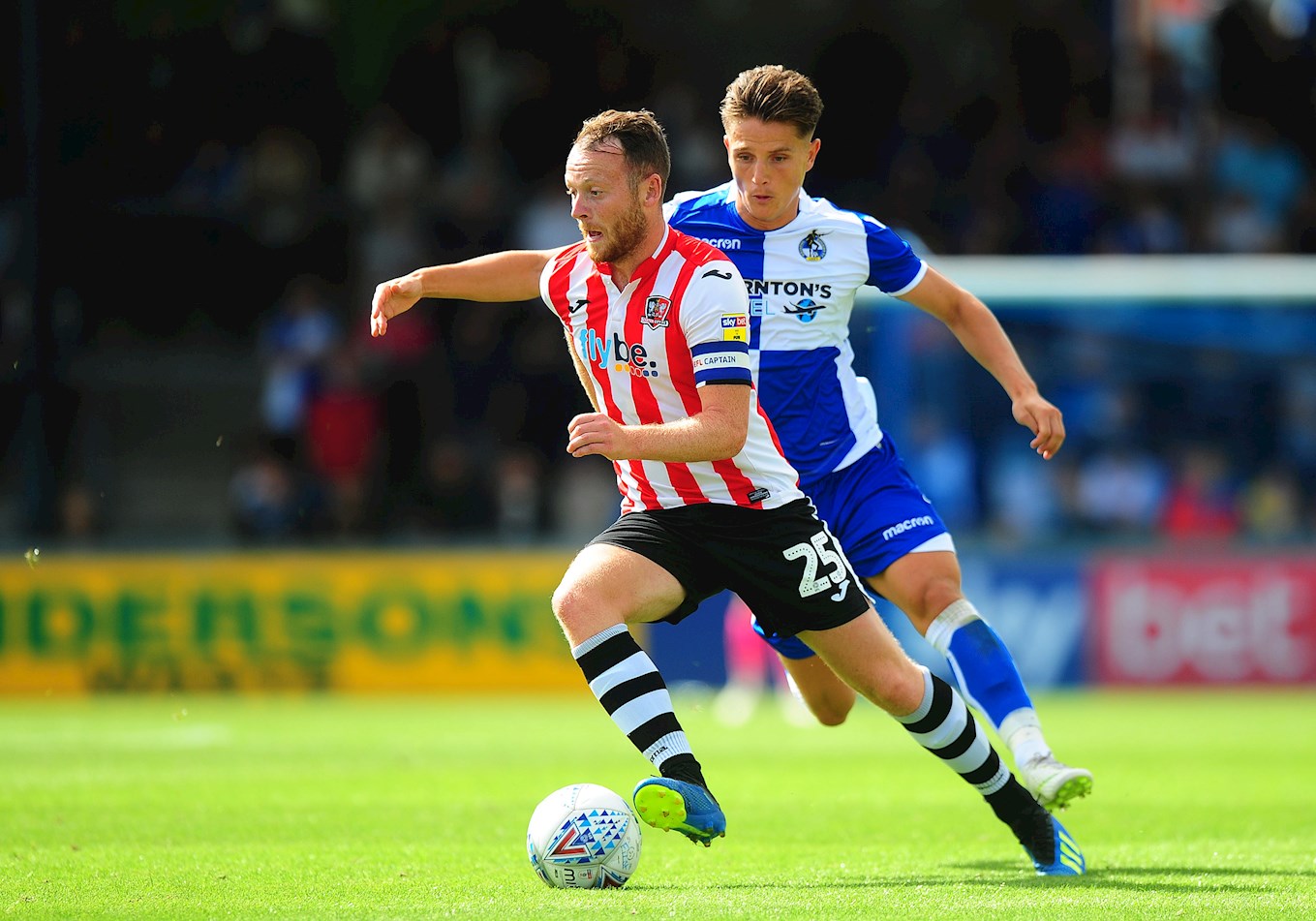 Jake’s select-ability for the first team, and for the captaincy, comes down to the fact that he is very much a team player.

Over the past two years he has played in the centre of midfield, out wide on the right and sometimes off the striker in a number 10 role. And last season he scored eight goals and made 12 assists in a campaign that saw City reach the League Two play-off final for the second season in a row.

“I probably prefer playing centrally as I am more involved in the game,” said Jake, when asked what his favourite role was.

“Sometimes on the wing, it can get a bit frustrating as you are not involved as much, but I am happy to do a job wherever the manager wants to play me.

“As long as I am playing and playing in a team that is doing well it doesn’t really bother me too much. However, for me, I think I play my best football when I am central.”

Jake has been at Exeter City on a permanent basis for two-and-a-half seasons and seems very settled to life in Devon, becoming a father 18 months ago. Fatherhood is a big responsibility, so is that something that he can draw on now that he has been given the captain’s armband full time? 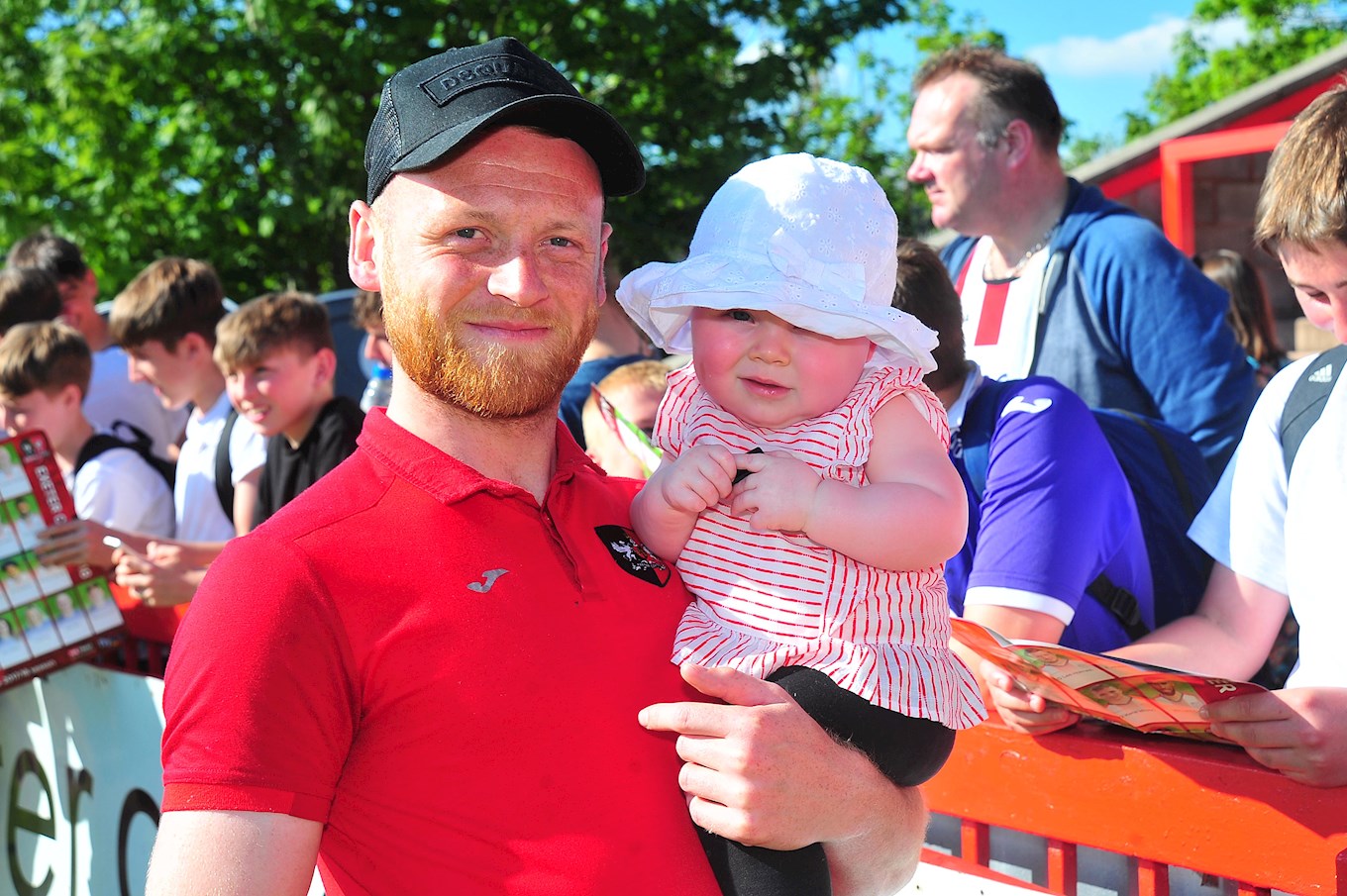 Jake with his daughter Luna

“Yes, I think there is possibly a link there,” he said. “I think whenever you have a child it makes you grow up a little bit.

“When you are captain you have lots of responsibilities and hopefully I can take them in my stride and do really well.

“It has been a good few years that I have been here now and missing out on promotion in the play-off final twice in two years was tough to take, but Matty (Taylor) has come in and done a fantastic job so far.

“Everyone is singing off the same hymn sheet and we are looking, hopefully, for another successful season.”

City have been busy in the transfer market this summer with five permanent new signings, and one season-long loan, coming through the door. It is, of course, the captain’s job to make sure the new players feel part of the team. So, what has Jake made of their impact?

“They have all come in and done fantastically and settled in really well,” said Jake.

“You can see their quality straight away. They have come from higher leagues – the majority of them – so it shows that we have signed some really good players and some exciting players to watch as well.”

That is what Jake makes of the new City players, but what do his teammates think of his appointment?

Well, speaking at a recent Supporters’ Trust fans forum, last season’s leading scorer Jayden Stockley said: “He is such a great lad and he is a great player too. He can play in a number of different positions but if you asked me to play in a different position, I would be horrific.

“I think it is a testament to him and how good a player he is that he can play centre mid, out wide or off the striker. 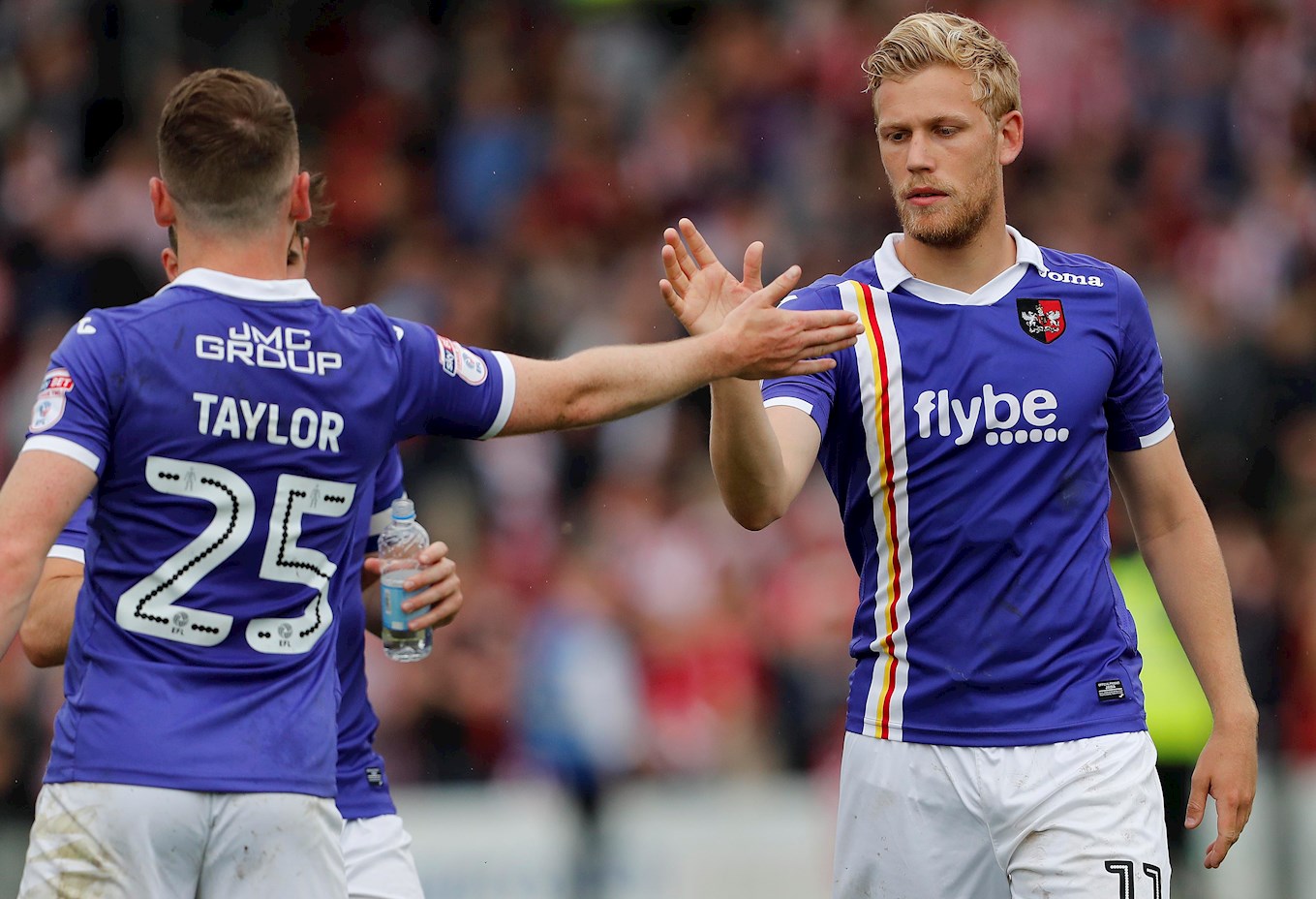 The recent praise hasn’t stopped there either. Kyle Edwards, who was on loan at Exeter City last season from West Brom, said in an interview that he had learned a lot from the older pros at St James Park and name-checked both Craig Woodman and Jake as players who had helped him.

“It is always nice when you get praise from someone outside the club,” smiled Jake. “I think it is important when new players come in that you try and make them feel as comfortable as possible and hopefully the new signings have all settled in well and it is important that the young boys, who have become pros, feel a big part of it as well because if they do well the club does well.”

If the young pros do well, the club does well – I wonder who first taught Jake that lesson?