For many City fans the term 'a new era' has been a phrase that has rolled off the tongue a plethora of times throughout the summer. A new manager, a new stand, new players, new season, but what else?

Of course, new coaching staff. A small group of people that will aid the manager in his decisions, his workload and the way he coaches his players over the course of the campaign.

Matt Taylor has appointed Eric Kinder to add some experience to the mix in what is a relatively young coaching setup. He has brought up Dan Green from the academy to marshal his under-23 side and he has charged Chris Weale with helping Christy Pym to an even better season than he had last year, as well as continue the development of young keepers James Hamon and Felix Norman. 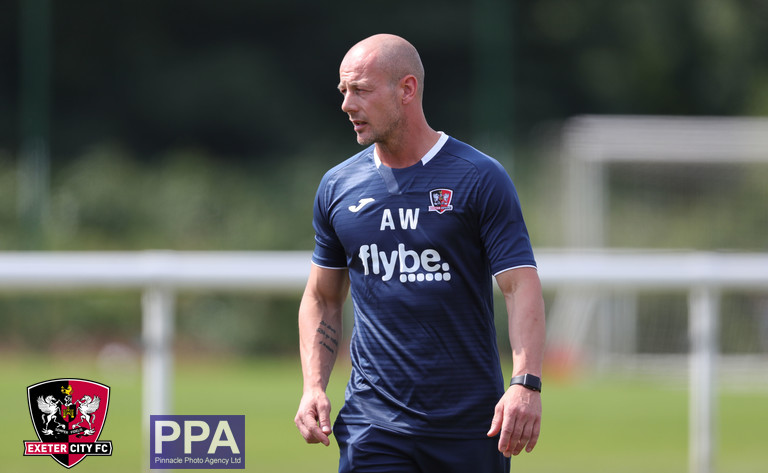 Last season, as the Grecians suffered agonising heartbreak at Wembley stadium again in the showcase event that is the play-off final, it would have left many City fans asking the question: “What if?”

But in what was a largely positive campaign on the whole for the club, you could forgive a City supporter for extending that question to: “What if… we hadn’t had so many injuries at crucial times?”

Injuries to important players at key times of the season could well have been one of many reasons as to why City aren’t plying their trade in English football’s third tier this season.

But, alongside Kinder, Green and Weale, manager Matt Taylor has added another individual to his coaching staff in the form of Andrew Wiseman, the club’s first full-time strength and conditioning coach.

A man who has worked hard and gained experience in strength and conditioning, he has been charged with the requirement of helping to make sure there are as many players available for selection as possible.

“I started off as an intern at Charlton Athletic where I did a season before joining Stevenage’s academy," explains Andrew. “I then spent three months in non-league before a role came up at Celtic in Scotland. I spent just under three years there, which was pretty much still learning the trade, and then this job came up and I ended up in Devon.”

Three years north of the border with Celtic Ladies has given Andrew a sound understanding, and he arrives at St James Park full of ideas and enthusiasm after learning a great deal in Glasgow.

“It was brilliant and cold," laughed Andrew. "The club is massive, all around the world everybody knows it so there is a really high level of expectation at the boy’s and girl’s academy. It was a fantastic experience, I come from a family of Celtic fans as well, but aside from that, the insight there was brilliant and, hopefully, I’m able to carry some of that over here.”

Andrew admits he has settled well in Devon and he has come across a set of players who are willing to learn and do their bit to ensure they are at their peak fitness levels. But how does he go about coaching these players on a day-to-day basis? 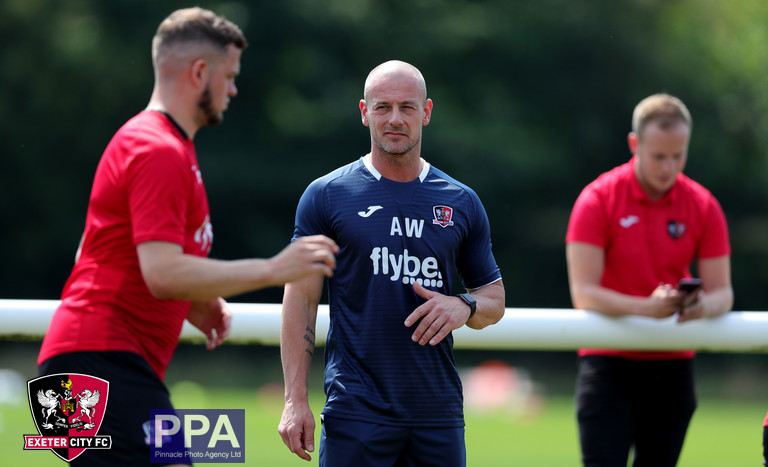 “It varies, especially now the season has started. The day before we will start planning training then we will look at how well recovered the players are from the day before, from games or any other stresses that have been applied.

“We then try to look at the training and plan it in a lot more depth. From my perspective, the players will come in and do their prehab, both the under-23s and the first team, and then we are very much out on the pitch. Depending on what day we are in during the week they will come and do a reasonably extensive warm up with myself and then they will do the technical and tactical.

“I think the most well-documented benefit to strength and conditioning is making players more robust and resilient. There is a lot going on, especially in a team sport, it’s a contact sport. Sports like rugby, Aussie rules and football you need to be robust and resilient to handle the demands of those sports. Ultimately, we want all players fit and available for selection for the manager.”

Andrew got to work from the first day of pre-season, the beginning of a plan to ensure that the players were ready for 3pm on August 4 against Carlisle United. But how did he go about getting the players onside to push themselves through a Devon heatwave? 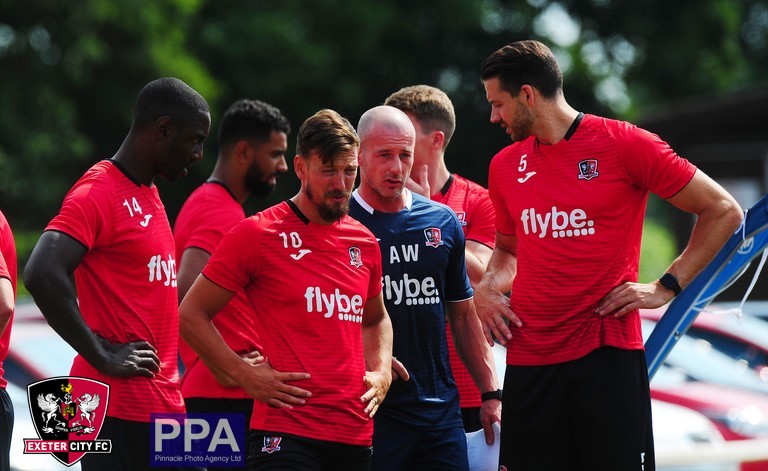 Jonathan Forte, Lee Holmes and Aaron Martin get ready for another exercise

“The fitness coach is probably the enemy to start with,” said Andrew. “But the lads have been brilliant, and they’ve put in a lot of hard work over the last few weeks and I think that probably showed through a little bit in the game against Carlisle.

“I was really pleased, I think the third goal showed that. From a physical perspective, you’re looking at it and seeing that there was still plenty left in the tank after 93 minutes on a very hot day. We were incredibly conscious of the hydration levels of the players, we put water bottles all around the pitch and we tried to get on as much as possible. The players came through it brilliantly and I think that’s testament to themselves. I can give them the orders, but they have to go and do the work and I think they’ve been brilliant with that.

“Everyone has been top draw. I’ve loved my time here, it’s a great setup, a great bunch of players and staff, so I’ve really enjoyed it. It’s a lot quieter, I’m enjoying it because everyone is really friendly. I’ve been overwhelmed to meet lots of City fans when I’ve been out and about, it’s been good. I’ve loved every minute, especially this weather because it’s not like this in Glasgow!”

The League Two campaign is renowned for its heavy fixture schedule with players often required to play two games in the space of a week and it provides a number of challenges when trying to ensure players are at their peak of fitness, not to mention having to recover in time from the previous match. 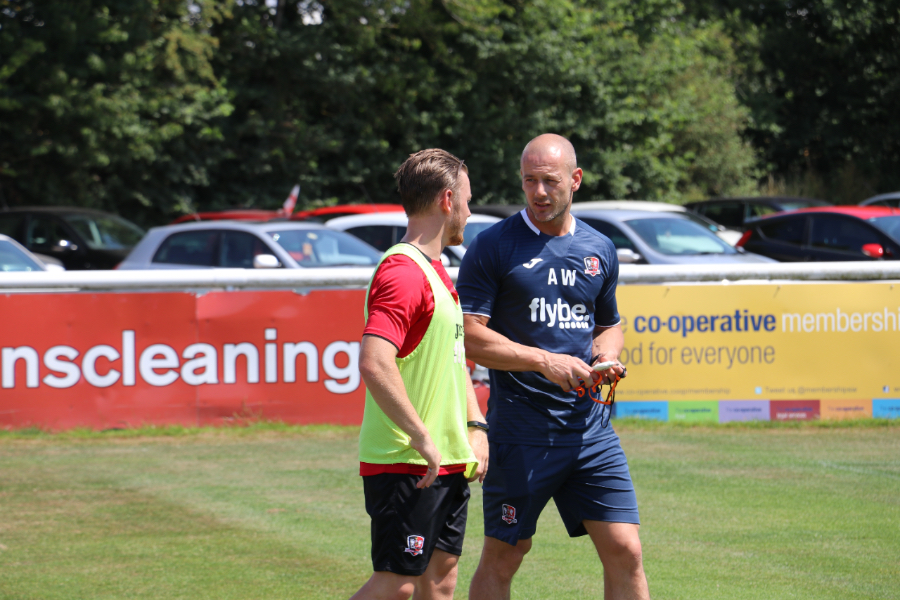 “Myself and Matt (Taylor) were talking about the amount of games that you play in League Two. If you do well in all competitions then you could be playing over 60 matches. It’s virtually relentless in the fact that you nearly always have two fixtures in a week so to get players from a game on a Saturday recovered to go again on the Tuesday is quite a challenge. So, that’s something we look at in quite a lot of detail to see where those players are.

“It’s everything from your nutrition to the soft tissue work that you do, like stretching and rolling. I don’t think you can accelerate recovery, the body will start recovering the minute you stop but you can facilitate it. Everybody will have different demands and it’s about trying to work out what those demands are. These guys, and footballers in general, go through an awful lot in a training week and playing two games a week so we try to give them the best advice we can to keep them ticking over and get them ready for selection to go again.”

After appointing Andrew, who Matt labelled him as 'a standout candidate', the City manager explained: “Injuries have cost us at key times over the last couple of seasons, so we are trying to minimise the amount of times that happens. He (Andrew) will assist Adey Saunderson with any injuries we do have with their rehab.”

Matt was also keen to underline that progress must be measured with more of a long-term viewpoint and that change won’t necessarily happen in a short period of time. So, how does Andrew plan to go about his work to help the players stay available for selection?

“We want to get the players a lot stronger, quicker and more powerful. I think some of them have got a good training history, so they are used to that kind of thing. Probably one of the key performance indicators is the reduction in soft tissue injury. Of course, your collision injuries and your broken bones are unavoidable but some soft tissue injuries are avoidable when you look at your load management, structure and policy of how we load those players up. I’d hope that in 18 months or so we’d see a massive reduction in that. My job is to keep those players ticking over, hope that they are all available for selection and be able to get them to recover quickly to perform.” 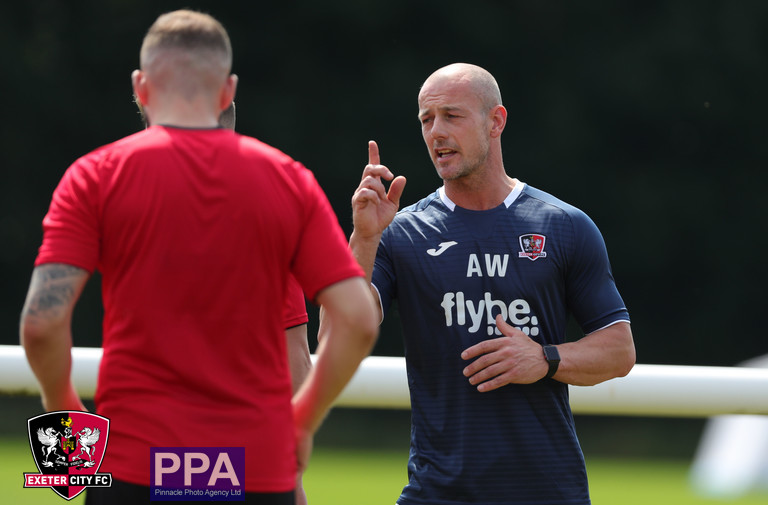 Andrew sends out a few instructions during pre-season

Working under a new boss, who is in his first managerial role, Andrew has been left impressed by Matt’s eagerness to bring in the sport science side of things even more and feels it can only benefit the squad.

“Matt has a really good idea, a grasp of sports science and strength and conditioning so we’ll always have conversations on the status of players," he said. "I think one of the principles we have to look at is when to push players and when to pull them back because we are always looking for performance. Performance is, especially in sport, the key indicator. Matt is great because you can go to him and talk to him and he goes to the gym himself, so he has a good idea, which is really refreshing.”

Like Andrew said, it will take time to show any tangible differences from the work undertaken by the players, but no doubt, his role at the club is a further sign of its development.